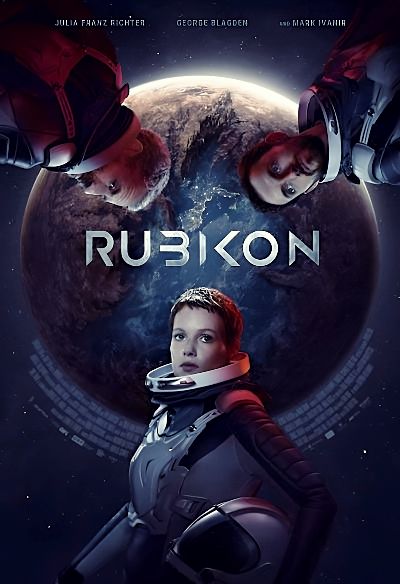 Although there is a lot of space in space, we always get to set claustrophobic stories in it, such as this 2022 movie, Rubikon.

No more governments or nations exist in this dystopian future, only corporate boards of directors competing for absolute power.

That is why two young astronauts, a boy, and a girl, fly to the Rubikon space station for a secret mission.

Indeed, it is a laboratory orbiting the Earth where a research team is experimenting with a new type of algae culture.

The efficiency of these cultures is such that they could actually solve the problem of feeding the entire human population, although the corporation desires to license the process to make as much money as possible.

Since the scientist in charge of the project does not agree with these intentions, the two astronauts have the job of mining the data so far without getting caught.

However, during one of the routine outdoor explorations, an explosion occurs, and the other station’s inhabitants die burning in the spaceship.

Thus the only survivors are the chief scientist and the two spy astronauts, who try to immediately contact the surface base to report the incident.

Unfortunately, every attempt is futile because a misty stratum suddenly envelops the Earth, making communication impossible.

When they later analyze the chemical composition of this impenetrable cloud, they discover that it is a highly lethal poisonous gas.

No one can therefore have survived on the planet, and they realize the three of them may be the last humans alive in the entire universe.

Relying on the experimental algae, they no longer fear starvation, able to hold out until the Earth is habitable again for their return.

But only some on the station have the same intentions, and the situation will only worsen over time.

A little warmth in the cold, empty space

Rubikon is the gateway for Magdalena Lauritsch to direct a movie in 2022 after gaining experience as a cinematic handler on other sets.

Having also written the screenplay, the overall point of view is strongly female through the character of Julia Franz Richter.

While relying on good technical skills in staging and special effects, fortunately, the story relies mainly on the evolution and interaction between the three main protagonists.

Moreover, through the space survival theme that we have already seen, for example, in movies such as Gravity or The Martian, the director touches on many other small and big issues of humankind.

Thus we have the ruthless greed of large corporations, heedless of the miseries of the earth’s people who have become resigned to the total dominance of money over their lives.

Indeed, although some groups try to resist and rebel, they can do nothing against a financial organization controlling every army and government in the world.

There are no more flags or national anthems, only lines in annual budgets where the account balance must always be positive, no matter how many people die to increase these numbers.

Each person values life by their debt points towards these corporations, like the main character wishing to be a simple girl and live together with her sister again.

Even more interesting is how these characters deal first with the loneliness of being isolated in space and then with the shocking knowledge of being the last humans still alive.

We see how easy it becomes to adjust to this absurd situation, where even love and a new friendship can be born because we are social animals who need contact with others.

Just as, one day, far away, will be our own love to fill the great, icy space void.

I admit to not knowing any actors in this 2022 Austrian production who were a discovery, such as what will happen on the Rubikon station in this movie.

The main character is the young Julia Franz Richter, an actress who may not have stunning model attractiveness but nevertheless holds her unique and special charm.

Starting with an aggressive attitude as a soldier on a mission at any cost, we see her become more romantic and motherly.

Perhaps it is a pity this story only unfolds into outer space, because this girl’s background has several exciting facets.

Equally interesting is how it grows her relationship with the colleague played by George Blagden, whom she constantly oscillates with between love, pity, and contempt.

We could say the young man is the most positive character and the only one honestly wanting to help others, although, unfortunately, he always lacks the strength to fulfill his purposes.

Between these two young astronauts is the older scientist with the tired and disillusioned face of Mark Ivanir, definitely the most ambiguous troop member.

Indeed, despite initially aiming to devote his special algae to the benefit of humanity, he later does not hesitate to be ruthless when his survival is at stake.

So don’t expect a space-set action drama, although there is no shortage of several spectacular high-adrenaline scenes; nevertheless, the tension comes mainly through storytelling and psychological insight.

We wait to see how Magdalena Lauritsch’s career will progress, for what we see in this movie appears to be a director with her own voice and style that I hope will find further production in the future.

The Innocents – Terror Can Come From A Baby’s Mind