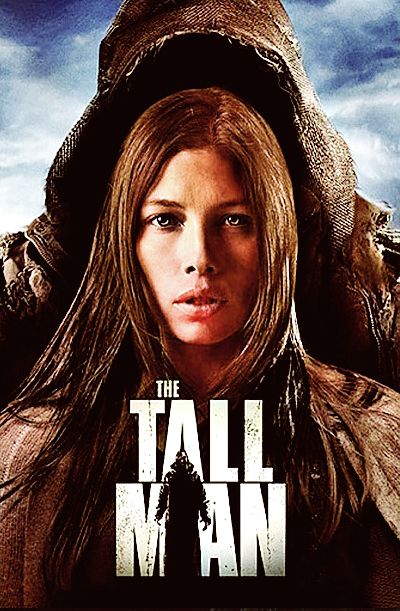 There is nothing a mother won’t do to protect her child, which is well known by the protagonist of The Tall Man, an intriguing horror movie from 2012.

It all takes place in Cold Rock, where families live in terror because of an endless series of abductions that have left very few children in town.

No one knows who is kidnapping the children, and the police can only rely on a few contradictory witness reports about a strange, hooded figure they all name The Tall Man.

The schools and playgrounds are silent and empty while parents’ hopes sink into coldness and loneliness, almost as if taking their children away has robbed them of their strength and will to keep living.

One of the few holding on is a woman, a young widow and the only local doctor, who lives with her sister in the middle of the woods, protecting her son at all costs from the same fate.

One day, on her way back from town after helping a young girl give birth, she finds her sister unconscious and sees this menacing figure take her son away.

Without a moment’s thought, she sets off after him in the middle of the woods, managing to get over the van carrying her child, only to end up falling painfully across the road.

Not knowing what else to do or where to go, the desperate mother takes refuge in the nearest restaurant, which is strangely full of people despite being late at night.

Unfortunately, no one there is on her side while the police finally put the pieces together and realize what is happening behind all those abductions.

To our surprise, even we watch this movie must reconsider everything we have seen in a different light.

A modern horror thriller with a classic soul

Pascal Laugier is one of the few current directors making pure horror, which doesn’t mean just repeating the same movie over and over again with slight variations.

Indeed, watching Saint Ange in 2004, he already proposed an unusual and intriguing pregnancy within a ghost story.

This debut prepared the ground for Martyrs in 2008, which, instead, is literally one of the most visually traumatizing experiences I have ever seen.

So we arrive in 2012 with The Tall Man, a movie returning to a story of high emotional tension without being overtly violent and bloody.

As an Italian, I also recognize many similarities with Lucio Fulci‘s 1970s masterpiece Don’t Torture a Duckling, another story about a series of missing children in old southern Italy.

Even in that case, the killer believed in doing the best for these children, preserving their innocence before the world inevitably corrupted their souls.

In today’s movie, the kidnapper follows the same logic, taking children away from families unable to support their potential, confident these babies should start a whole new life elsewhere.

Of course, this is a controversial topic that inevitably divides everyone’s opinion, as each thesis has logical points to support its validity.

Returning to the filmmaking style, the first half is a rush of the mother chasing the mysterious kidnapper without giving him a break.

At that point, there is a break where Pascal Laugier reshuffles everything we thought we knew, starting a new story with a completely different premise.

I noticed once again critics and audiences rated this movie as being almost insignificant, while it is a modern thriller with classical influences that today is more unique than rare.

The story offers constant surprises starting from a not-easy preamble, offering both cruelty and moments of human tenderness with a winning outcome.

Another side of Pascal Laugier‘s horror is how he always places women at the center of his stories without making them the usual screaming puppets running away from the ordinary killer trying to kill them.

Indeed as I have already mentioned, it is the stunning Jessica Biel running after the fugitive killer, playing an extremely ambiguous character about whom we will change our minds more than once.

With this performance, she delivers convincing suspense at every fringe of this thriller, carrying out many of the most critical scenes almost single-handedly.

The beautiful actress is also one of the executive producers, perhaps already laying the foundation for another career when she eventually stops acting.

Against her, we have Colleen Wheeler in the role of one of Cold Rock‘s many mothers who grieve over her son’s disappearance and will become the protagonist’s greatest enemy.

The sides of the narrative always hang between her and the younger Jodelle Ferland, paradoxically the only child in town who longs to be kidnapped to escape her awful family.

An important consideration is not to think about these characters within the usual trite stereotypes of good or bad; trust me, you will enjoy the story much more if you let it flow over you without preconceptions.

After all these women, let us finally talk about Stephen McHattie, an elderly and wise lieutenant who is not remotely ready to deal with what lies behind these kidnappings.

The actor was among the classic stars of the popular show The X-Files, playing a character perhaps needing more space and time to appreciate him fully.

Unfortunately, The Tall Man was a commercial failure in 2012, failing to recoup the moderate $20 million production budget for the movie.

Indeed word of mouth among those who despised it did not help, along with the fact it was also shown in a few theaters, where it dominated the latest chapter of Christopher Nolan‘s Batman trilogy and the first episode of the long-running Avengers saga.