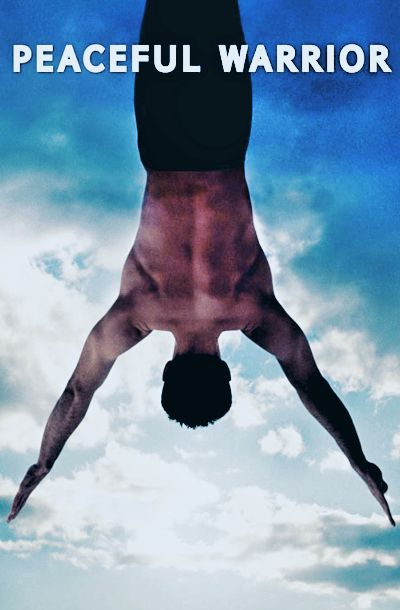 After the movies about some real-life women last week, today we look at Peaceful Warrior, another biopic of a great American athlete released in theaters in 2006.

Following his senior year of college, we might initially struggle to understand what is missing in this young man’s life.

Indeed, he comes from a wealthy family, gets good grades easily by being clever, and is attractive and charismatic, bringing a different girl into his bed every night.

What’s more, he is the best-endowed athlete on his college team, the one everyone looks up to with respect and envy, especially as the Olympics are now near and he has the gold medal pretty much guaranteed.

Despite all this, he cannot sleep, feeling as if something is missing, like all the winning pieces of his life are failing to complete the mysterious puzzle of himself.

So every night, he goes out for a walk in the dark until, by chance, he ends up in front of a mini-market/workshop led by a strange old man.

He starts some strange and exciting conversations with him about a life with meaning and the best preparation and physical condition to achieve any goal.

Intrigued by this man’s strange and exciting philosophy, the boy calls him Socrates, spending more and more time following his athletic and personal advice.

One day, sadly, he has a terrible motorcycle accident, shattering his right leg in several places and ending up in surgery, from which he emerges with a metal bar holding his bones together.

Of course, his teacher and classmates think his career is over and he will be lucky if he ever walks again.

Except the mysterious Socrates does not give up and instills courage and confidence in him, pushing his way toward an impossible human and athletic achievement.

A true story told in a surreal way

Looking at Victor Salva‘s previous filmography, I would never guess he would come out with a movie like Peaceful Warrior in 2006.

I don’t want to go back on the court problems that crushed his career, which I hinted at in my article where we looked at his excellent horror saga Jeepers Creepers.

It’s a real shame he threw away his future, despite being launched by none other than the great Francis Ford Coppola, the cinematic godfather we all know.

He immediately saw his extraordinary talent and visual style combined with a narrative ability of rare charm and effectiveness.

Indeed, his talent led him without effort to experiment with different cinematic genres such as horror, action, and even fantasy, for example, with the awesome Powder of 1995.

Here the director was venturing for the first time into a biopic about one of America’s most bizarre sports figures.

A man who is somewhere between a sports leader and a spiritual guru, who we still see here at first as an arrogant teenager with lots of talent but little control and self-discipline.

It is no coincidence that throwing away garbage is among the first pieces of advice of Socrates, the resounding character played by a magnificent Nick Nolte, whose real name we will never know.

Garbage is metaphorically the burden of all superfluous things in life, everything standing in the way of our human growth and attaining pure happiness.

Victor Salva does not forget his style and stages this strange story of fall and redemption with great virtuosity and imagination.

A surreal story, almost as if Socrates were an imaginary persona or perhaps a personification of the willpower and intuition of Dan Millman, a great American athlete and philosopher.

Just as it was not easy for the director to portray this story without deviating from his style, we must acknowledge the skill of Scott Mechlowicz in playing the unconventional Dan Millman.

The actor shows off an enviable physique, is credible in many athletic displays, and is a charming sexy guy to boost girls’ hormones.

It would have been easy to stage the usual teenage feelings of being angry at the world or talking about being oppressed by a hostile environment against him.

Otherwise, there is no excuse; the boy is the primary cause of the misfortune occurring to him, and he rises with courage and perseverance from the darkness, becoming a better person and more sympathetic toward people.

As much as I liked the main character, it is hard to surpass the outstanding Nick Nolte performance, a Zen warrior whose first purpose is serving others.

We know very little about this modern samurai, his story, and where he comes from; indeed, as I said at one point, we even doubt he is real.

Indeed in the more visionary sequences, it is hard to tell if it is not Dan Millman evoking his presence in order to have a friend and mentor in the worst difficult times.

Instead, I was very disappointed in Amy Smart, not because of her, who is always as beautiful, joyful, and sunny as the first spring morning.

However, her character shows up far too little, especially considering how important she would become the protagonist’s wife.

Nevertheless, the actress does her best in the few minutes she has, deserving her name on the poster.

Unfortunately, Peaceful Warrior had little success at the box office in 2006, not often present in movie discussions, even among Victor Salva fans.

Instead, I warmly recommend experiencing it, considering it will be difficult to see any more work by this director, now wholly obliterated from any cinematic or television production.