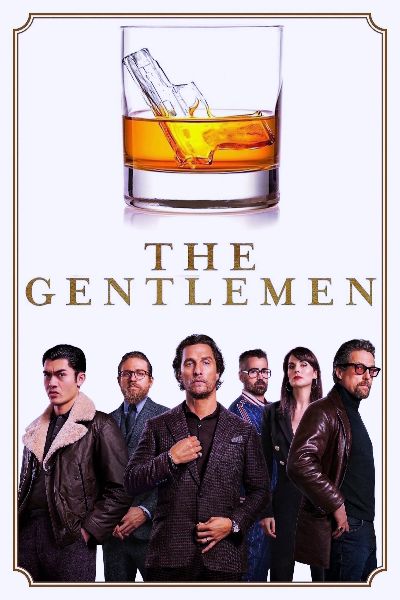 Even if we don’t like gangsters much in real life, we still can’t help but watch them in movies like 2019’s The Gentlemen.

In this case, we follow what supposedly is the last act of the criminal career of England’s biggest marijuana dealer.

His story comes to us in the shape of blackmail by a journalist negotiating with his most loyal henchman, setting the price of the valuable information he has uncovered.

Thus we see how the gangster started out as a poor and unfortunate farmer’s son, earning a scholarship and then discovering his talent by selling weed to wealthy college classmates.

However, be aware of his elegance: this little lord with grammatically impeccable speech, indeed, is also perfectly capable of single-handedly wiping out a rival gang with a machete.

Today he is one of England’s most feared criminals since he has contacts among prosperous aristocratic families who grant the space to cultivate drugs secretly.

Still, a good gambler knows when it’s time to get up from the table and enjoy the winnings, so the man only wishes to sell his production/distribution network to an old American friend and buyer.

Unfortunately, an aggressive young Chinese wannabe boss comes to ruin the party and declares war on his gang after unsuccessfully trying to fit into the deal.

Moreover, because of a mere rudeness, he gets the editor of a major London newspaper as an enemy, who begins a continuous and annoying indirect defamation propaganda campaign against his associates and friends.

The solution may come precisely from a journalist working for this newspaper who intends to blackmail him for some secrets, yet at the same time revealing some things he had missed and could solve all his problems at once.

Guy Ritchie is one of those directors I love and hate, as does Joe Carnahan, for example, who occasionally exalts me and, at other times, disappoints with his movies.

However, we can always acknowledge his great filmmaking ability to consistently deliver highly entertaining stories that, like it or not, we can never say are boring.

In this case, The Gentlemen is a deliberately over-the-top story in its criminal ecosystem and storytelling tone, making it one of the most pulp movies of 2019.

Looking at his career, this is the genre where Guy Ritchie has always delivered the best, except for the pleasant exception of the enjoyable espionage The Man from UNCLE.

Certainly, we must concede something to the infallible planning of Matthew McConaughey‘s gang, at times too perfect to believe.

In this sense, the movie is constantly back and forth between flashbacks and flashforwards. Yet, the effective alternating montage makes us understand the various scenarios’ evolution without too much trouble.

Indeed each scene complements the previous one, interchanging narratives of various characters always concatenating into a single larger sequence.

Although the story has pulp tones in the dialogues and costumes, the violence it displays is never excessive and unbearable.

Instead, the director relies on a script that, as usual, rests on blackmail and scheming of all kinds, light drugs, and an assortment of villains from all nationalities.

Undoubtedly many of the characters are straight clichés, though their cool and confident appearance does not detract from the aggressiveness and general amusement that is never lacking.

In general, Guy Ritchie repeats his successful recipe from the days of Snatch, tweaking a few ingredients just enough to make it always fresh and tasty.

Top recipe for marijuana and war

As we can tell from his central position on the cover, the main character is obviously Matthew McConaughey.

A dashing and aggressive criminal at the height of power, his sarcastic demeanor is a relief in the many scenes where he masculinely confronts his many rivals.

Thanks to his gorgeous wife, played by Michelle Dockery, who is as intelligent as she is sexy, his gang consistently stays one step ahead of their enemies plots.

Yet even though the woman is an excellent brain and trusty confidant, his army’s armed wing relies on strategist Charlie Hunnam‘s planning.

Despite his lawyerly appearance, the man is unafraid to get his hands dirty and take the field to fix the worst problems.

Right in his home is where the story opens, when he gets an unexpected visit from the journalist, an outrageous Hugh Grant, an inexhaustible source of information just as much as petty blackmail.

The hilarious British actor is a wonderful storyteller who joins the various characters over time into a single tale like an epic pulp crime fable.

In this war, on the opposite front, we have young Henry Golding, a rookie Chinese criminal looking to become a dragon-head as soon as possible, dominating every enemy and trafficking.

On the other hand, the American Jeremy Strong, the protagonist’s friend, is more ambiguous, even though we know how friendship matters less than money in this world.

Finally, in the middle of the story, we get the entrance of an unrecognizable Colin Farrell, a strange sensei whose life mission is to train young drifters to become honorable warriors.

The Gentlemen has everything I’ve come to expect from Guy Ritchie‘s finest movies, even being a solid performer in 2019 considering the not-exaggerated budget of only $20 million.

We certainly won’t remember it as a masterpiece that upsets the rules of cinema; however, it is ideal for an excellent entertaining evening leaving plenty of space for an eventual pleasant second viewing as well.

Crossroads – The Faith Way Of...