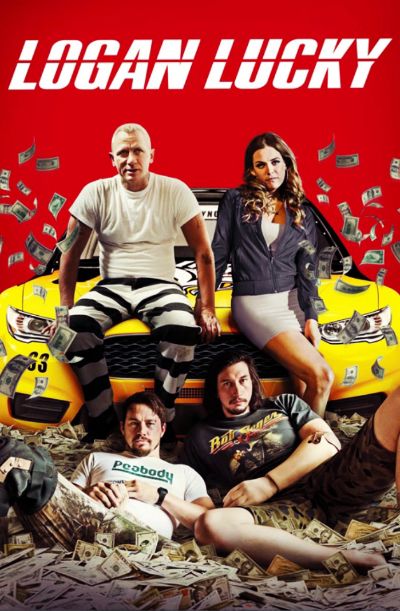 Already the director of a successful heist movie series such as the Ocean’s Eleven saga, Steven Soderbergh is back on the topic in 2017 with the hilarious Logan Lucky.

This time the story unfolds in Virginia, where a humble laborer is out of work and struggling to support his daughter, now living with the mother who has sole custody of her.

Obviously angry, the man plans to take revenge on the same workplace where they kicked him out, the Charlotte Motor Speedway.

Indeed, the construction site was right underneath the race track, fixing the asphalt spots that were caving in before official competitions began.

Behind those tunnel walls also run the pneumatic tubes connecting the cash registers to the armored vault where they store the track’s wealthy proceeds.

The former worker’s plot is to intercept the money and literally suck it out of the tubes and then escape before anyone notices the theft.

He first involves his brother, a former veteran who lost his forearm in war and now runs a small bar in town.

After that, the two men visit a criminal in prison, an expert in explosives and indispensable to achieving the loot.

He accepts their proposal on the condition of involving his two brothers, who, unfortunately, are less clever than him.

The last member of the team is finally their young sister, who will get the bomb guy out of prison and then bring him back after the heist, exploiting an internal riot they have organized with some inmates.

Although the plan suffers some annoying changes, the preparation proceeds smoothly, but they must choose between moving up the timetable or giving up for good.

Obviously, these lunatics will play all out by trying to rob the wealthiest racing event of the year on Memorial Day weekend.

Take me home… a lot of money

We already said Steven Soderbergh was abundantly familiar with heist movies with Ocean’s Eleven, yet Logan Lucky from 2017 deals with the same subject but is different in almost every aspect.

First, the characters, starting with protagonist Channing Tatum, are all raw, uneducated losers rather than brilliant cool thieves like George Clooney and Brad Pitt‘s gang.

Of course, this aspect brings us to the location, which shifts from the glittering city of never-sleeping Las Vegas to the sleepy streets of this small Virginia suburban town.

A detail that is not insignificant, considering the story opens and closes on the notes of John Denver‘s sweet song Take Me Home, an act of love for this American state.

Unfortunately, the car matter is not exploited much; despite everything taking place inside (and under) the Charlotte Motor Speedway, the director focuses more on other aspects of the story.

His heist plot may get too messy at one point (as with the various Ocean’s Eleven), defying any law of probability with a series of implausible coincidences.

However, this is not what matters because it is clear the prominent emotion goes toward these humans’ derelict revenge against a society that has always exploited and squeezed them to the point of exhaustion.

As usual, Soderbergh’s narrative talent is impeccable, choosing perfect timing in the montage of many events rushing in at the same time.

Moreover, the overall story flows away for almost two hours without us noticing due to the pleasant humor always there, which, however, does not detract from little dramas and family problems for the characters.

So critics and fans might call it a minor effort by this director; as far as me, I wish to have at least one movie a week of this quality and entertainment.

A great chorus of losers robbers

Besides the great style and cinematic wisdom in his direction, the excellent cast they feature each time always makes the difference in Steven Soderbergh‘s movies.

In this case, we have as the main character a lame and dim Channing Tatum, the older brother of the Logan family, known in town for bringing bad luck.

I have never found the actor to be a tremendous dramatic phenom, although we must admit he nonetheless has the charisma to be the lurching leader of this outcast gang.

By his side, we have the excellent Adam Driver, who is instead one of the best talents of this generation and whom we already admired elsewhere, such as Jim Jarmusch’s splendid Paterson.

In this case, he plays the least cunning member of the family, yet bravely follows his brother and sexy sister Riley Keough without hesitation, although he is never entirely convinced by their plan.

However, over the cast reigns the terrific performance of Daniel Craig, who leaves behind the sober elegance of James Bonds, becoming this mad bomber who blows up walls with a pack of gummy bears.

The actor truly amazed me with this hilarious and unpredictable role, so different from all the characters we were used to.

Finally, let’s mention Hilary Swank, an impeccable FBI agent who maybe deserved more space in the story instead of just the final part.

Anyway, the whole cast moves perfectly in harmony with Soderbergh‘s direction, always succeeding in creating that perfect environment where everyone knows their part and plays it to perfection.

So we applaud this family-oriented heist story that, with simplicity and elegance, successfully entertains and excites us.

I have noticed, however, this movie is flying under the radar of many who still need to learn of its existence, despite the director’s and actors’ reputation, so let’s get busy giving it some notoriety and the respect it deserves.