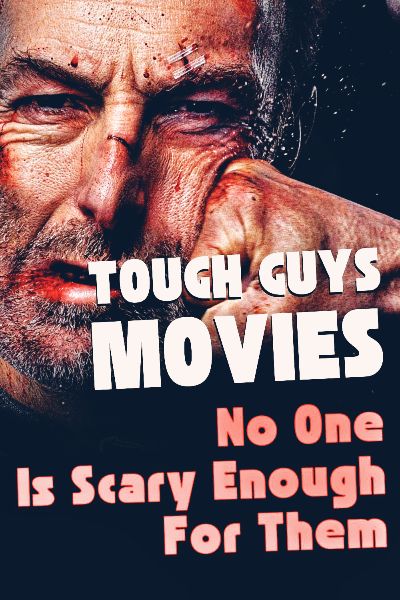 How tough is the life of tough guys in movies, chewing stones at breakfast in the morning and then pissing them into glowing metal before nightfall.

Joking aside, after last week’s article entirely focused on the female cinematic universe, I decided to up the testosterone dosage with a healthy charge of masculine aggressiveness.

It’s a Man’s World, sang James Brown back in the 1960s, although the situation has dramatically improved since then in gender equality.

However, some areas of the earth appear determined to remain in the cultural stone age, as we see from the shocking reports of women’s repression coming daily from Afghanistan.

Luckily, however, today we are only talking about cinema, something for better or worse is always capable of lifting our spirits and making us at least dream about the possibility of a better world.

Even if today’s movie protagonists are tough steel guys, at least they are not complete macho jerks. They are just democratically slaughtering anyone standing in their way without being too subtle about this or that political ideology.

Let us, therefore, expect fists flying and guns smoking in no-holds-barred duels without neglecting the story and characters that, as always, are the beating heart of any movie.

So let’s properly oil our muscles because we must fight shirtless, holding our breath to show off our abdominal side best as hard and polished as an ironing board.

Let’s cut to the chase then; it’s time to descend into the arena where our equally pissed-off enemies await us, already clenching their hands into fists, eager to knock all our teeth out.

Usually, the actor is banished to doing supporting roles in harmless comedies with Ben Stiller or Adam Sandler. Yet, in this movie, he plays a former boxer and former con guy instead, getting into trouble against a gang of tough South American criminals.

Indeed, right at the beginning, this man becomes unemployed and returns home to find his wife is sleeping with someone else, by whom she is also expecting a child.

Jobless but in dire need of money, he reunites with some of his old contacts and starts a risky but lucrative drug trade.

However, these associates are not exceptionally bright, forcing him to react by shooting to save his life and end up in jail again.

His wife seems willing to wait for him while he serves his sentence but soon disappears without a word.

At that point, the lawyer tells him the woman is in the hands of the gang, and if he wants to get her back in one piece, he must kill another inmate.

However, his target is in another maximum-security prison, with no regard for laws or human rights, where he must get himself transferred and then locked up in the most dangerous prisoners’ block.

S. Craig Zahler proves again to be a director and screenwriter with guts after the disturbing western/horror Bone Tomahawk.

His characters, staging, and dialogue is as hard as the asphalt he repeatedly slams our faces against amid the reality of an unforgiving world.

Vince Vaughn is at his peak of facial expressionlessness and physical might, becoming a Terminator against whom not even the worst tough guys in this movie can do anything.

Obviously, when it comes to stories about tough guys, we can’t omit from the list Walter Hill, the cult director of such unforgettable movies as The Warriors and The Driver.

The story’s protagonist is an incorruptible Texas Ranger, a far cry from the tacky TV series starring Chuck Norris, instead with the grim, coolly impassive face of the terrific Nick Nolte.

For years a gang of drug dealers has flooded the streets of his small town of El Paso, the last American stronghold before the Mexican border.

The reason for this crime wave is the resourcefulness of a new criminal who used to be his best friend before betraying the police and starting his own business.

Because of him, a special army squad arrives in town, composed of soldiers officially dead in action, tasked with wiping out the drug cartel at any cost.

Covering up the theft of some documents with a robbery, some of these soldiers end up arrested just by this Ranger, yet when their captain asks to release them, in return, he offers him the opportunity to join their mission.

Walter Hill crafts a modern crime story with lots of action and violence while featuring a romantic flair clearly reminiscent of the old westerns.

Nick Nolte is the steel hero who bends to no one, not even his friend/enemy Powers Boothe who, in his madness, has basically the same honor as the Ranger.

Finally, honorable mention for Michael Ironside and his dirty dozen, among whom we also find the great Clancy Brown, the vicious Kurgan of Highlander.

In short, we are talking about a movie where the actors compete to be the hardest tough guy with some memorable lines and amazing anthology action scenes. What more do you need?

Continuing to talk about action cinema, we certainly must recognize Hong Kong‘s hard-boiled king, namely the wondrous John Woo, who finally landed in Hollywood during the 1990s.

The tough guy of the story here is the bendy and muscular Jean-Claude Van Damme, who will accompany the beautiful Yancy Butler in this movie as she searches for her father through the streets of New Orleans.

Unfortunately, we know from the start that it will be a futile search, as we see the elderly gentleman dies for the fun of a bunch of rich men enjoying ruthless hunting sessions with tramps.

In addition, the police are on permanent strike, so there are very few officers on duty, and crime is rampant in the city without control.

So the hero and his beauty must do it all on their own, tracking down the mercenaries who organize these manhunts for hire and obviously ending up in their precision scopes as prey for their next game.

Hard Target has everything you would expect from a John Woo movie, which is crazy action scenes and over-the-top banter between the tough guys in town who measure their manhood by the length of their guns.

However, the Chinese cinematic style and elegance turn the violence into an ironic death dance where the hero stacks his enemies by twirling across the stage like a ballet dancer.

Besides the athletic prowess of Jean-Claude Van Damme, let us not forget the magnificent villain played by Lance Henriksen, an unscrupulous hunter for whom money always comes after personal satisfaction.

It was a dazzling debut for the American career of a director who, however, returned 10 years later to China disappointed by Hollywood’s production constraints, only to be free again to make that kind of cinema he most loved to narrate.

We come closer to the present day with a 2021 movie directed by Joe Carnahan, a director whose quality sometimes fluctuates yet always provides entertaining fun for his audiences.

It all takes place in a small police station in the middle of the desert, where two strange criminals are locked up for seemingly trivial charges on the same night.

Except one of them is an informant for the FBI, helping to break up his gang, while the other is a hitman with the task of taking him down.

Unable to escape from this killer, the criminal prefers getting arrested to feel safe, while the other obviously go after him without letting up.

However, with this movie, I am cheating you because the protagonist is a woman, Alexis Louder, who, however, is no less than the tough guys who will visit the station to take out the inconvenient witness.

Indeed, the situation degenerates ultimately when Toby Huss, a downright psychopathic henchman, unlike his colleague Gerard Butler, who is instead a sociopath, arrives on the scene.

A difference the killer is careful to emphasize as he tries to kill Frank Grillo, usually at ease in action roles even if, in this case, he has a rather ridiculous long-haired hairstyle.

Joe Carnahan punctuates the timing of a story that, okay, a bit improbable, nevertheless flies breathlessly by from beginning to end without hesitation.

The action scenes are few and mostly relegated to the final half-hour, although the madness escalation creates a fun playground of men (and women) armed to the teeth.

If you missed this movie, I suggest you fix it immediately because the actors’ performances and the director’s skills more than make up for a script with a few holes.

We conclude with a movie I started watching almost accidentally, yet I place it in the first rank of enjoyment in this muscular gallery of tough guys.

The main character is a man with a perfectly ordinary life, with two children, a wife with no particular enthusiasm for him, and a menial job with no great expectations in his father-in-law’s firm.

Until one night, some thieves break into his house, battering his son, who then protests because he did not even try to defend him.

The incident could have ended there for the man, but when he realizes the strangers also stole his daughter’s beloved bracelet, something he had long buried awakens in him.

As we discover very early on, he was once a CIA liquidator, meaning the last face seen by everyone who slipped up once too often with the government.

Along a path of destruction that takes him across the city, the man becomes the enemy of a powerful Russian underworld boss, forgetting even why he was so pissed off in the first place.

At that point, a no-holds-barred war is born between him and this gang of criminals where no prisoners are taken, but each simply wants to annihilate his opponent’s respective families and businesses.

Summing up this movie in one sentence, we could call it the amusing epic of what could very well be the uncle of John Wick.

Not surprisingly, among the producers, we find David Leitch, one of the directors of the first saga’s chapter with Keanu Reeves, and closely resembling action flicks such as Atomic Blonde or Bullet Train, the latter not surprisingly among this year’s best movies.

Although at the venerable age of 60, Bob Odenkirk proves to be a great leading man in some resounding fight and shoot-out scenes.

I can only conclude by advising you not to judge an action hero by the wrinkles on his face, which also applies to other protagonists in today’s movies who, though limping at times, are still tough guys you don’t want to mess with.

Christmas 1980 Movies – Holiday Classics We All...

Alone against the world – True stories of...