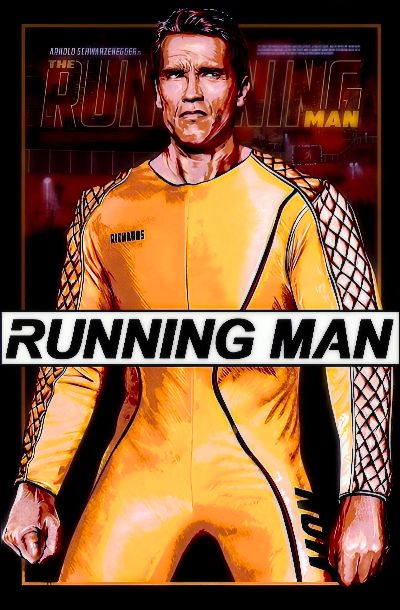 Before 1987 I would hardly have believed finding the names of Stephen King and Arnold Schwarzenegger in the same movie, yet it really happened when The Running Man came out in theaters.

The story unfolds in a hypothetical America of (at that time) future 2017, where the government every day distracts the public from the painful reality with extremely violent TV shows.

However, this does not prevent constant clashes and demonstrations against the police, during one of which a helicopter pilot mercilessly massacres a crowd of unarmed citizens.

At least, that is the official story the news broadcasts, as in reality, the man refused to open fire, eventually ending up being arrested and imprisoned by his colleagues.

In prison, he meets some members of the resistance trying to oppose the everyday lies of the big networks, cooperating with them to carry out a spectacular jailbreak.

The men ask him to join the anti-establishment fight, yet he prefers attempting to travel somewhere foreign country without extradition.

Unfortunately, his attempt fails miserably, and they arrest him again, although instead of going to jail, he has discussions with one of the television bigwigs.

The latter offers him a chance to win freedom and wealth by participating in their most successful show, which is precisely The Running Man.

It consists of traversing a series of decaying neighborhoods, now converted into fighting arenas, surviving attacks by the network’s deadly hunters.

Initially, he rejects the opportunity, but when he realizes the friends from his escape will also be involved in the game, he decides to help all of them by stepping onto the battlefield.

However, none of them can imagine that within the show’s arenas lies the network’s biggest secret that could fuel the flame of rebellion against the cruel dictatorial regime.

The dystopian future of the 1980s

To direct this little cult, we have Paul Michael Glaser, famous in the 1970s for his role as David Starsky in the TV series Starsky & Hutch.

Unfortunately, we have few more opportunities to see him again in the cinema industry since he will later work mainly for television.

I have little to complain about his direction, which effectively depicts this totalitarian America without much of a big budget available.

The pace of the narrative is fast, at times too short, yet the various plot steps flow convincingly in this entertaining critique/parody of the ruthless television show business.

Moreover, fun is ensured by ubiquitous exaggerated humor throughout the action unfolding and this dark dystopian future staging.

Not surprisingly, in the screenplay, we have the fabulous Steven E. de Souza, the great creator on paper of some hilarious 80s action like Commando and Die Hard.

So expect the classic over-the-top tough-guy lines and pure wrestling-style battles, as they also are the colorful costumes of sketchy gladiators/hunters.

To be fair, I will admit Stephen King‘s original play was much better, taking place all across America in a massive manhunt involving citizens, not just hunters.

The great writer signed the novel under the pseudonym Richard Bachman, the name under which he published his pure thriller works without those supernatural lore elements making him one of the supreme masters of horror.

However, I disagree with those dismissing The Running Man so quickly, merely describing it as the usual noisy action movie typical of that period in 1987.

While not rivaling the brilliance of Stephen King, the director and screenwriter succeed in stylishly mocking the establishment by covering up the truth with fake or exaggerated news.

Does it resemble today’s world enough?

Of course, the central star is Arnold Schwarzenegger, at the center of this horrible ancestor of the equally horrific modern reality shows.

I would like you to consider the great sacrifice of the actor who refused no less than an offer from Stanley Kubrick to conclude the filming of this movie.

The great director wanted him in the famous Full Metal Jacket, a war story where he would have been the brutal soldier Animal, a role later going to the funny Adam Baldwin.

However, old Arnold does not disappoint his fans by loading the whole story on his muscular shoulders in one of his usual performances with great delight and humor.

Running with him from TV gladiators are Marvin J. McIntyre and Yaphet Kotto, who may not be in great shape for a fight but prove to be loyal and reliable companions.

More unlikely is the survival of the beautiful Maria Conchita Alonso, a naive network employee he initially kidnaps and then unexpectedly finds as an ally on the battlefield.

However, every action movie needs a thick villain, and here we have the cynical Richard Dawson, who uses his real-life experience as an anchorman by bringing it to the stage as the supreme dictator of this ruthless live game show.

His character and Schwarzenegger’s are undoubtedly the two pillars on which the charm of the whole story rests.

Indeed, their vulgar and irresistible dialogues, though absurd, show us how truth actually works for those behind the colorful sets of TV shows.

In conclusion, we include the small cameo of Dweezil Zappa as an unlikely revolutionary rebel, the son of the widely daring rock musician Frank Zappa.

In 1987, perhaps The Running Man was funnier, as the future of this movie seems to become more and more real every day.

Maybe we have all underestimated some of its predictions about our world, from social isolation to Alexa/Siri/Cortana-like home technology or, finally, the embarrassingly modern reality shows, which, no matter how much they suck, are always hugely successful.