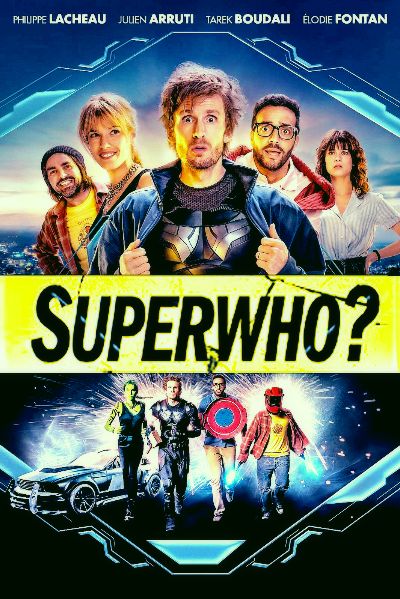 Let’s face it, we’ve all dreamed of being superheroes at least once in our lives, except for the protagonist of this hilarious 2021 movie, Superwho.

This guy is actually just a penniless actor yearning to land the part of a masked vigilante in a French blockbuster about to begin filming.

Having this role could be a chance to regain esteem and popularity after he made a commercial about a small/size condom brand embarrassing him with friends and family.

Especially at home, things are not going well, as his father is a police officer who sees him as a disappointment, unlike his sister, who was a brilliant soldier.

In addition, after the divorce, his mother stays with his best friend in a bizarre situation compounded by a new baby’s arrival.

Thanks to a lucky break (and a very unlucky break for a rival), the production chooses him to play this strange hero, Badman, obviously a shameless copy of the famous DC Comics hero.

Enthusiastic about this opportunity, he gets into great shape, preparing athletically for the many action scenes.

However, on the first day of filming, rushing to the hospital where his father lies shot, he smashes into a bank window driving the badass car modified particularly for the movie.

When he regains consciousness, he remembers nothing of his past, but still having the stage costume, he thinks to be really a vigilante whose wife and child have been kidnapped.

Thus begins his incredible journey to the enormous mansion at the other end of the city, where he believes there is the villain of the story, causing endless trouble along the way.

But when he saves a girl he just met from a robbery, then a cruel and ruthless gangster will become his true nemesis.

The undisputed star of this 2021 movie is Philippe Lacheau, being either the director, screenwriter and first lead actor of Superwho.

Putting aside all kinds of shame, he performs as the protagonist in many funny, awkward comic situations with great nonchalance and spontaneity.

Although in some scenes, we see he has an enviable muscular physique, he reduces his character to a magnet passively attracting all sorts of misfortunes.

Equally hilarious is how he manages to get out of trouble every time, often without even understanding how he did it, just by an amusing conjunction of coincidences.

All the other cast members are no different, starting with the sassy/tough sister played by the sexy and funny Élodie Fontan.

She is the first going looking for him, accompanied by the unlikely duo of his best friends, Tarek Boudali and Julien Arruti, who are quite simply irresistible in their inexhaustible idiocy.

One of the funniest aspects is the constant references to many movie superheroes, without the need for characters being the usual comic book-loving nerds.

Far from it, they are all total idiots who just happen to be repeating exactly the most famous scenes we’ve seen in Marvel or DC Comics movies.

From Batman‘s costume and car all the way to Thor‘s hammer summoned in the last battle, the quotes endlessly reach the absurd climax and Avengers-style deployment against the supervillain snapping his fingers like Thanos.

Taking random objects from the set, these unlikely heroes become, for a few moments, a parody of characters like Iron Man, Captain America, or the green and sexy Gamora from Guardians of the Galaxy.

Also, let’s not forget the ever-present romance in the background with the beautiful Alice Dufour; however, the one character who needed to be employed more to really appreciate it.

Ridiculous but not stupid

However, the plot is not only silliness and nonstop fun, but it is basically a homage to the cinema factory, showing us the process of how some of the movies we love so much come about.

For example, we have Jean-Hugues Anglade playing a famous old actor, the idol of the main character, trying to revive his career through something made for the younger generation, like the superhero genre.

His crazy clown character is another plagiarism of Gotham City‘s Joker, whom we will, unfortunately, admire only in the ultimate duel where the brand of a famous vacuum cleaner must be brought in at all costs.

It may sound silly, yet product placements happen even in high-budget movies such as Michael Bay‘s noisy Transformers or Robert Zemeckis‘s Cast Away, where the FedEx logo is virtually ubiquitous.

Equally hilarious is the highly random process, at times, of how an actor gets to be the star, in this case, thanks to the violent ( yet exhilarating) misfortune of a rival celebrating his victory too early.

Watching that scene reminds me of how I read that Paul Newman, for example, got his first film role: accompanying his friend for an audition, the casting guys eventually took him and left his friend at home.

As happens with all coincidences in this movie and the protagonist lives for a day the thrill of being a hero; likewise, in the real cinema, myths may be born for a pure accident.

Who knows if director/actor Philippe Lacheau is one of these lucky ones and may Superwho mark in 2021 the birth of a movie creator coming much further in the future.

For now, his debut fulfills the task of entertaining with great fun, so mission accomplished.

I watched this movie by purchasing it on Italian streaming but could not find the English version, so you will forgive for once if I do not include a link at the end of my recommendation. However, if you can find it, especially in theaters, don’t miss it!

Burn Out – Fighting For Life Along A Risky Way