Burn Out – Fighting For Life Along A Risky Way 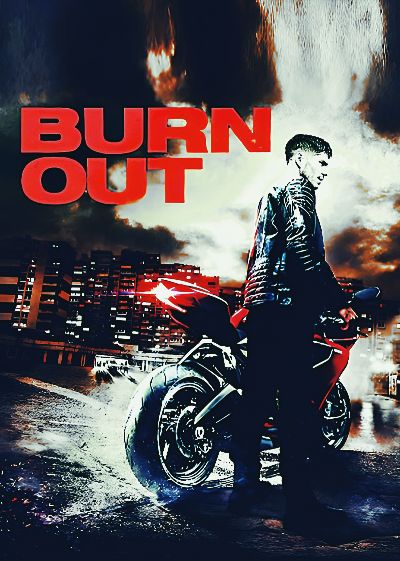 I usually agree with many criticisms about Netflix productions, yet it is not the case with this 2017 action crime movie, Burn Out.

Life is not easy for Tony, the protagonist of this story, a boy from the projects trying to support his ex-woman and the child born from their old relationship.

Not making a lot of money working in a humble warehouse, he exploits his motorcycling talent by showing off in official competitions.

His last race does not end well, although he gets to the first position quickly, but when the engine fails, he must retire and stop at the side of the track.

However, his performance catches the attention of a manager working for one of the Ducati racing teams, gaining to participate in an evaluation period along with other candidates.

Excited to finally have a great chance, his joy evaporates when he visits his former partner and finds her injured inside the devastated apartment.

Indeed, to make some money, the woman had agreed to move some drugs for a dangerous city gang.

However, her current partner disappeared, stealing her entire stash, so now the drug dealers demand payment for its worth of 50,000 euros.

Not knowing what else to do and having nowhere near that amount of money, the boy agrees to use his driving skills by serving as a courier for these criminals.

The deal is simple: he must work for them for two months, and then the debt will be written off.

At first, he can handle the situation, though soon, the fatigue of double work and the trials of being a professional pilot overwhelm him.

Moreover, the gang begins doing business with dangerous new partners, while their rivals are eager to get them out of the way for good.

The first outstanding thing about this 2017 movie is the excellent direction by Yann Gozlan, who places Burn Out on the saddle of the protagonist’s motorcycle.

Of course, escapes from the police are certainly nothing new in cinema, such as the titles I recommended in my article about The Best Pursuits Of A Lifetime.

In this case, the motorcycle guy is not a tough dude with a criminal past but an ordinary worker who ends up in this world indirectly because of his woman.

His fundamental weakness is one of the strengths of this story, brought to the stage with good talent by the young actor François Civil.

Of course, we must admit that equally weak seems the plan of these pushers to traffic the drugs, whizzing by at high speed on the highway when instead they could have gone by back roads or other less obvious means.

A different matter is the criminal environment, which has a simple but reasonably convincing construction involving few characters yet with solid and believable personalities.

However, we all want fast-paced sequences with adrenaline pumping through the veins and a constant sense of danger.

It will not disappoint you in this regard since the director makes good use of multiple angles from small cameras on the motorcycle’s fairing to make us feel close to the rider.

Equally dense is the plot’s suspense that, though with some logical gaps, has some good surprise twists without becoming ridiculous or exaggerated.

In short, this movie is an excellent debut for Yann Gozlan, followed by the even better Black Box, an excellent mystery, investigation, and conspiracy thriller.

Moreover, it may be a good entry into the so-called French Polars (police/noirs), such as, for example, those directed by the outstanding Olivier Marchal, just to mention one.

The many faces of French cinema

We have already mentioned François Civil, who initially did not convince me much, perhaps too good-looking to seem like an ordinary warehouse worker with no future.

However, as time goes on and after the many night rides for criminals, his performance improves, and the tiredness comes out of his eyes as he tries with difficulty to stay awake with pills.

The callback to Vanishing Point, where the driver nonstop drove the legendary white Dodge Challenger R/T constantly high on benzedrine pills, is amusing.

However, the pills topic is not much developed in the plot as an addiction or even a simple problem.

Much better are the two criminals played by Olivier Rabourdin and Samuel Jouy, the former older and reasonable while the latter younger and impulsive.

Although it seems that the older man is in charge, the younger man often does his own thing as well, and it will be a significant lapse in judgment by him that leads to the concluding climax.

Equally convincing is the beautiful Manon Azem, a drug-dealing mother who makes the mistake of working with the wrong people.

In just a few scenes, the actress builds a good relationship with the protagonist, who is strangely sweet and aggressive, although the reasons they broke up could be explained better.

Finally, let us also discuss young Narcisse Mame, a young black criminal who is a friend of the protagonist and a rival of the gang he works for.

Again this friendship is convincing with little dialogue or explanation, although it would have been nice to see how their relations became after the story’s frantic last act.

Despite these minor flaws, they do not obscure the solid narrative force of a simple yet highly staged and entertaining story.

Obviously, I do not expect to Burn Out to become a 2017 cult movie as Vanishing Point was; the comparison does not even exist; however, for those who like urban crime and crazy rides at full speed, it is a flavorful variation on the theme definitely worth watching.

The Good, The Bad, The Weird – Action And Korean Fun