Alone against the world – True stories of women 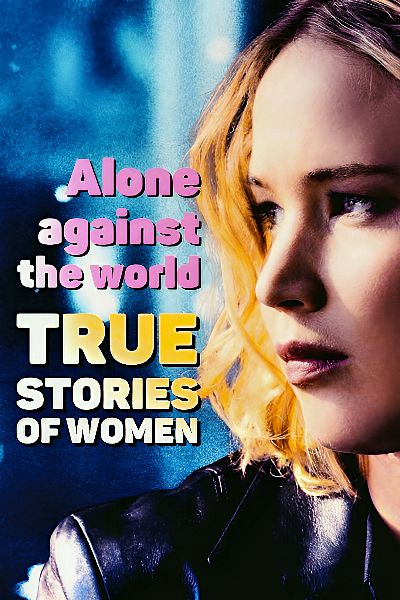 There are only women stars in today’s movies, inside some incredibly and sadly true stories.

It can be challenging to make a biopic when the starting subject is already famous, and everyone knows how it will end.

So what makes the difference is the style of the director in charge of the project and, of course, the catharsis that the actress in the primary role can provide.

Some of these women will emerge successfully from the myriad difficulties they face, while for others, unfortunately, there will remain only posthumous fame to their tragedy.

What unites them is the resilience and stubbornness of their determination to follow their path without compromise, despite being openly hindered by society or even their own families.

Many people don’t like people deviating from established patterns by choosing for themselves what to do in life, so they are always ready to cowardly place logs on the tracks to derail the train of destiny.

However, now let’s watch these women adventure and admire their bravery in some stories which are just true enough to land in our cinemas.

Lets begin with a woman who has achieved an important position as a political activist, despite starting from nothing as a poor unemployed and single mother with three young children.

Although intelligent and good-looking, even having won numerous beauty contests in her youth, this lady cannot find a job and lives hand-to-mouth in debt.

Until she finds a lawyer after being hit by a car and suing the other driver, unfortunately without getting a penny this time either.

Merciless (and intimidated) by her delicate family situation, the man hires her as a secretary in his small law firm.

One day by pure chance she begins to take an interest in a simple real estate transaction, which strangely contains all the personal medical records of the residents for the house in question.

Slowly digging her way to the truth, she uncovers a blatant case of corporate pollution that will come to involve as many as 600 other people.

Steven Soderbergh packs a intriguing legal comedy from the true story of Erin Brockovich, a strong, independent woman making a small cameo as a humble maid.

Playing her is the radiant Julia Roberts, as unstoppable, vulgar and aggressive as she is simply adorable and irresistible.

Simply hilarious are her verbal duets with Albert Finney, playing the small-time lawyer who because of her will find embroiled in court against one of America’s energy giants, Pacific Gas & Electric.

For many years, the company had been polluting the waters of this small California town, causing local families all sorts of cancers and other horrible, deadly diseases.

It was a huge blow to the industry, which had to comply to avoid penalties and settlements of more than $300 million, as was the case with PG&E.

An enlightening story where, for once, justice prevails.

The following story, unfortunately, doesn’t have a happy ending as well, leading to the ruthless killing of a woman who was a true pain in the ass for some of Ireland’s worst drug dealers in the 1990s.

This woman was a reporter for a small but respected Dublin magazine, stung by the many overdose cases rising among young teens.

Climbing the chain of power, she went from interviewing ordinary junkies to small-time local drug dealers, eventually coming to the bigwigs running the traffic throughout the city.

This drug baron obviously is not exactly happy about the meddling journalist’s too many questions, threatening her and her family and even going to savagely assault her in person.

However, this fails to make her give up, even when she is wounded in the leg by a gunshot.

The escalation then climaxes in June 1996, when two of the boss’s henchmen ambush her on the highway, shooting her six times in cold blood.

Joel Schumacher does a fine job of cinematic investigation, not failing, of course, to dramatize the story the American way sometimes, yet all in all, with a more than acceptable result.

Simply outstanding is Cate Blanchett‘s performance as this woman whose ultimate sacrifice changed the story for good in the struggle against crime in Ireland with a true revolution of legislative reforms.

After her death, numerous demonstrations and permanent patrols of ordinary citizens raised around the Dublin streets, sinking these drug traffickers’ businesses to the ground.

Another personal epic that teaches us how, sometimes, the right person in the right place can make all the difference in this world.

We must go back even further into the past to watch what happened to the next movie’s woman, the protagonist of a true story that shocked the American public in the late 1920s.

Once again, it is about a single mother who returns home on an ordinary day to find her son missing.

She immediately reports the fact to the police, who engage in an unsuccessful search for months, except finally getting the child home.

Yet, the surprise from all surprises, the child is not the woman’s child at all, and she vigorously protests the mistake.

Unwilling to admit any kind of error, the police captain not only does not accept the woman’s disapproval but even locks her up in a psychiatric institute.

Fortunately, a reverend and a famous Los Angeles lawyer take her side, succeeding in getting her released from the absurd medical detention.

However, the bad news for the woman is not over since another detective finally discovers what happened to her son, a victim like so many other children of a maniac in the middle of the desert.

Directing this biographical masterpiece, we have none other than Clint Eastwood, a guarantee of quality for the best American cinema.

Although a proud Republican, the director does not spare a scathing critique of institutions and the police, which are inefficient and obtusely closed to any kind of dissent.

Bringing the true story of this desperate woman to life is a magnificent Angelina Jolie, in what we can say without hesitation, is so far the best role of her career.

We cannot ask for better, then, for this dark American chronicle episode, told with the elegance of an old-fashioned fairy tale and the harshness of a punch in the stomach.

We stay in America to learn the true story of another woman with a difficult life, Joy Mangano, in a movie recounting the escalation of her career as an entrepreneur.

From an early age, she always enjoyed inventing all kinds of things, a passion unfortunately stifled by her cumbersome family situation.

Indeed, after her parent’s separation, the father switches from one woman to another. At the same time, the mother remains in her house doing nothing all day except watching one telenovela after another.

To make matters worse, her ex-husband, an aspiring Latin American singer waiting for success that will never come, also lives mooching in the basement.

Everything then seems to be against her, working endless shifts at the airport front desk while she dreams of a better life for herself and her daughter.

Until one day, by chance, she has a simple idea: to invent a more absorbent mop whose end is removable and conveniently cleanable in the washing machine.

However, realizing the idea will be an almost impossible feat, though it will help her understand her family’s true nature and how much it will cost to be truly free finally.

I cannot fault the direction of David O. Russell, creator of, for example, The Fighter, a little gem of boxing and dreams of glory.

The director sometimes uses narrative time too long, yet his message of social (and economic) retaliation from the bottom always comes through loud and clear.

Simply phenomenal is the beautiful Jennifer Lawrence as the protagonist, who suffers like a punchball every abuse throughout the story and then explodes against everything and everyone.

For once, we have an excellent fable about the American dream, where there is no shortage of shadows from the capitalist system that paradoxically hinders those who truly have talent.

For the grand finale, we go back even further in time, to the mid-18th century, for a biographical movie about the true story of Emily Dickinson, a woman of impossible temperament and one of the most sensitive and unusual poets of her generation.

From the beginning, we see her struggle against religious authority, a duel she will carry throughout her life, dropping out of college while still very young to return with her family.

Although he was a tough lawyer, her father was also an open-minded man with little tolerance for church pressure and the wrongness of the era, such as the horrible slavery that would soon lead to a War of Secession.

While her brother married and left for the front amid their protests, Emily and her sister remained alone to run the show after her father’s death and her mother’s worsening condition.

While not strikingly beautiful or pleasing in manner, because of her talent, she attracts several suitors, fascinated by her poems that the Springfield Republican publishes weekly.

However, she decides to stay single to the end, unable to accept the marriage noose and the usual conventions of those times.

Terence Davies‘ direction is without infamy or praise, showing no particular flashes of brilliance yet wisely choosing to let Dickinson’s poems speak directly, accompanying us from scene to scene through the various transitions of her life.

Lending a face to the poetess, we have Cynthia Nixon, the television star for the celebrated Sex and the City series, here in a definitively more complex and multifaceted role.

A woman as intransigent toward others as herself, living lonely just as she writes in her poems, which unfortunately will only be truly appreciated after her death.

Therefore, as for the other women we have discussed today, we have a true admiration for her but not much envy, as I don’t know how many of us would try to go through the suffering we have seen in these stories.

The Good, The Bad, The Weird – Action And Korean Fun