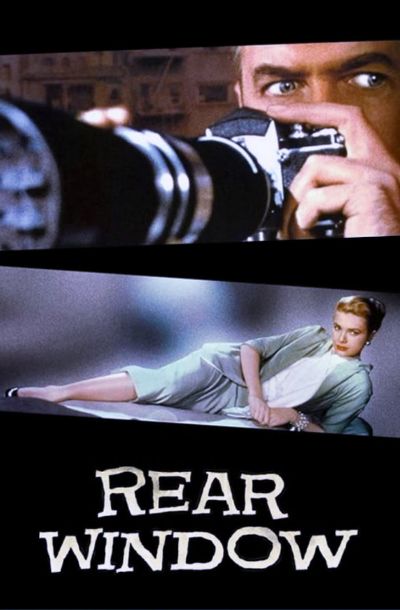 Comedy, romance, and suspense; we can say there’s almost everything in Rear Window, a 1954 masterpiece and by far every voyeur’s favorite movie.

There is not much to do when you are housebound, as this story’s protagonist knows well, being in the last week of convalescence after a leg fracture.

From time to time, he is visited by his nurse, who takes care of and helps him out in the apartment, and a beautiful young rich, and elegant girl who wishes to persuade him to marry her.

However, he always attempts to avoid the subject, being a free-soul photographer who loves to travel the world, so he believes they could never work as a couple.

Immobile in a wheelchair, the man cannot do much besides spend time looking out the window facing the courtyard in the back of his building.

Thus he watches his neighbors’ lives go by, whether they are the beautiful dancer exercising every day, the young piano composer, or the mature single lady struggling with her many suitors.

One night some noises wake him up, and when he looks out, he spots the gentleman who lives opposite him leaving the house numerous times carrying away some suitcases.

From that moment, the man’s wife, a lady bedridden by illness, seems to have disappeared into thin air.

With his suspicions, he succeeds in involving his nurse friend and the girl who would like to marry him in the investigation, yet does not convince a former comrade-in-arms who is now a policeman.

Therefore, the small group decides to break into the apartment of the possible murderer to either find the smoking gun with which to convict him or find nothing and be finally persuaded of his innocence.

The inimitable creativity of a cinematic genius

Whether you are an Alfred Hitchcock fan or not, you must admit Rear Window is a brilliant and ingenious 1954 movie.

Admiring every idea the director puts into a screenplay with minimal ingredients, we can understand why many regard him as the supreme master of suspense.

Despite staying inside an apartment throughout the story without ever leaving, this movie has the most camera movements in his career.

Unlike the total immobility of the protagonist, old Alfred does not stand still for even a second, constantly driving from window to window in this apartment building.

In addition to the inevitable murder and investigation thriller plot, the director employs this system to narrate the countless lives inhabiting this block of flats with almost no dialogue or soundtrack.

However, do not think there is no music; on the contrary, it is practically omnipresent and comes directly on the scene from the apartment where a piano composer lives, in which, in the beginning, we also see Hitchcock himself in an amusing cameo.

Similarly, this courtyard becomes a huge Cluedo game, where every movement and whisper becomes a hint to speculate in a thousand different hypotheses.

Did the man kill his wife? What did he do with the body? What’s in all those suitcases he’s constantly handling? How come he wraps a saw and a knife in a piece of paper and then gets rid of them?

Surprisingly, the only one not surprised by all these oddities is the policeman friend of the protagonist, who seems able to find plausible explanations for everything.

Hitchcock wisely chooses every shot to narrate this amusing crime comedy, sprinkling the story with impeccable British humor and an underlying dash of romance that can never be lacking in his movies.

So many stars in just one apartment

Leading this masterpiece’s cast, we have the excellent star James Stewart, who returns to work for Alfred Hitchcock following 1948’s Rope, another cinematic prodigy of suspense edited as one extended sequence plan.

The actor gives a smooth, light-hearted performance, playing a man who is anything but brave or an icy-souled detective.

However, even this unrepentant bachelor has a sweet damsel trying to hook him, the gorgeous Grace Kelly, who, at the height of her 25-year-old beauty, is something to love at first sight.

At first, she may seem like the typical spoiled rich girl thinking only about having fun and nice clothes.

Yet, we soon discover her adventurous side as well when, recklessly of danger, she unhesitatingly breaks into the murderer’s house.

Assisting the protagonist in the funny side of the story is the amusing Thelma Ritter, a somewhat grouchy and overbearing nurse and handyman who constantly tries to convince the man to settle down and marry the girl.

Midway through the story then comes Wendell Corey, a cynical cop who listens to his friend’s conspiracy hypotheses more because he thinks he is getting bored.

Finally, we should remark on the outstanding performance of Raymond Burr, a strange man we see through the window for the entire movie and who may have committed the perfect crime.

The actor succeeds in being creepy just by his presence since, given the distance, we never hear his voice except in the frightening climax face-to-face with the protagonist.

Despite being from 1954, Rear Window is still a movie with a complex and modern construction for what is practically an instruction handbook for any aspiring director wishing to try his hand at a thriller.

I will conclude by recommending, if you love this kind of suspense, to try watching What Lies Beneath by the great Robert Zemeckis or even Body Double by Brian De Palma, both blatant homages to this immortal masterpiece.

Alone against the world – True stories of women

The Vanishing Of Sidney Hall – A Life...