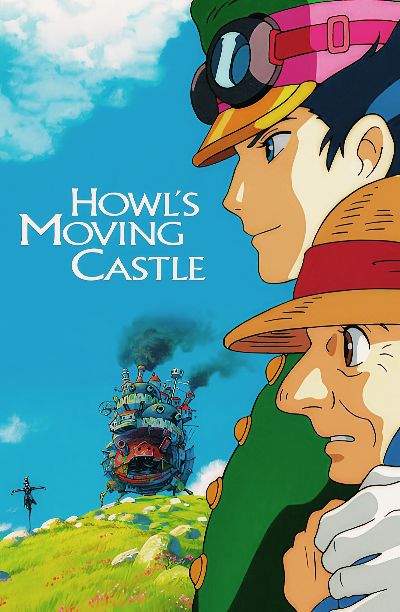 There has always been plenty of magic in Hayao Miyazaki‘s animated movies, yet in 2004 the brilliant Japanese director pushed the envelope with the fantastic Howl’s Moving Castle.

The story begins in a beautiful valley with a big city full of color, people, and lots of life going back and forth through the ever-crowded streets.

Yet over everyone’s head hangs the threat of a terrible war waging for years with the neighboring kingdom and the army’s heavy planes/dirigibles constantly leaving to bombard the enemy.

Unaware of all that is happening around her, a young girl welcomes an old woman into the store where she works, who imposes a curse on her out of irritation and spite.

Indeed, the girl instantly ages into an elderly lady, fleeing into the meadows in shame.

There she meets a strange living scarecrow who takes her to a place where she will be safe, meaning the vast moving castle of a powerful wizard named Howl.

At their first meeting, she cannot tell if he knows about the curse or is just pretending otherwise; nevertheless, he welcomes her into the house as a cleaning lady.

In time she gets to know the strange tenants of the castle, a child who is the wizard’s little helper and a talking flame who is the actual magic essence holding that place together.

When she becomes friends (and something more) with Howl, he asks her to talk to the kingdom’s sorceress, who had once been his teacher.

Surprisingly, at the meeting, she finds the witch who made her old, but she becomes helpless when the sorceress of the kingdom strips her of all power.

Miraculously managing to escape this trap, the girl and Howl must discover how to break their curses together.

A dream-filled fairy tale for the whole family

Hayao Miyazaki crafts a world of spectacular, dreamlike fantasy from the foundation of Diana Wynne Jones‘ novel of the same name.

I have read some criticism about the many differences with the original work, but having never read it, I will only judge the movie.

In my opinion, it is almost unnecessary to remark again on the talent of each Studio Ghibli artist, from where countless masterpieces of Japanese animation come from, such as Porco Rosso, my favorite since I am Italian.

Each drawing is a perfect blend of colors bringing to life a mixture of contrasting feelings, such as joie de vivre and childlike cheerfulness, along with an always romantic and optimistic undertone.

However, numerous dark flashes visually shock our minds, such as Howl’s demon transformations or the cruel curses these wizards and witches throw at each other.

Combining these elements, we get a fairy tale with constant tension, yet the director skillfully never dramatically burdens the narrative.

Each scene has an idea or invention to delight our eyes while also dealing with adult topics in a direct and naively intelligent approach.

In front of this entertainment, adults become children again, a time when we used to play for hours with our friends simply with a ball or a small stick, letting our imagination do the rest.

At the same time, children discover tiny facts about the adult world, constantly searching for happiness amidst a thousand difficulties, and how we need to overcome one small problem at a time, holding on even when we see only darkness around us.

Therefore, this is the perfect movie to watch together with the whole family, unifying everybody while admiring the wondrous adventures of these eccentric characters.

Love and imagination against the foolishness of war

What themes does Hayao Miyazaki deal with in this story?

Surely we can put in front of everything the growth from youth to maturity in old age, something that, for the unfortunate protagonist, happens instantly.

Yet while she sleeps or in the most romantic moments, her appearance returns to normal, almost like the curse is powerless before the serenity of dreams or the miracle of love.

Regarding Howl, the matter is more complex since he has betrayed his master to obtain the imposing power that will forever bind him to Calcifer, the living flame origin of his magic.

However, this change does not stem from a mad dream of conquest by the wizard but rather a desire to be free and untethered from the kingdom’s laws forcing him to war, night after night.

Of course, this is the second main topic, war and how it turns men into something horrible.

Not surprisingly, Howl’s curse becomes stronger after each clash with enemies as he returns home to his beautiful lover, struggling to return to his human form.

We don’t know the motivations for this war, but it doesn’t matter because, after all, all wars are equally stupid in the same way, as the kingdom sorceress says at the conclusion of the story.

It is easy to see why it was so successful. It is a story that invigorates the soul and succeeds in reaching everyone in its simplicity, albeit narratively becoming more absurd by the minute.

The quality of the drawings and animation is nothing short of majestic, squeezing every ounce of Studio Ghibli’s talent and imagination into a magical fluid that reaches straight to our hearts through our eyes.

Halloween Movies – How to spend...

Memento – Remember Not To Forget...