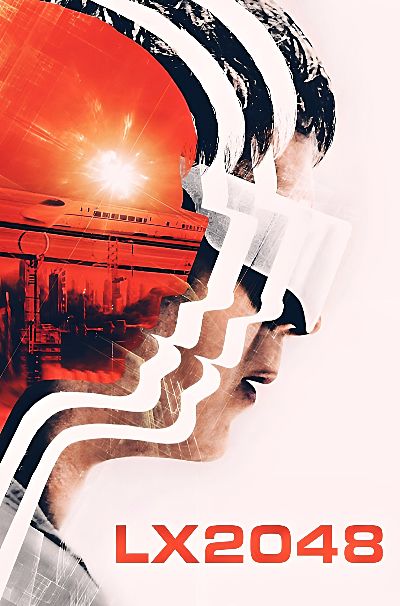 Quite often, movies unfolding in the future are not optimistic about what lies ahead, and in this sense, LX 2048 is a sci-fi thriller from 2020, which is no exception to the rule.

Indeed in this world, the ozone layer is entirely nonexistent, destroyed by indifferent humanity that can no longer get out due to the scorching heat of sunlight.

The population could not adapt well to this enforced isolation, so the government imposed regular consumption of tranquilizing psychotropic drugs for everyone.

Against this background, we follow the protagonist’s life, a broker for a software company leading the virtual reality industry.

Once his job was highly prestigious and wealthy, yet now this technology is fading away for the benefit of a revolutionary new set of microchips.

Very soon, people no longer need to use visors and peripherals to interact in the virtual world; instead, they will have a chip in their brain to experience anything physically.

However, his bosses do not want to accept reality, refusing to abandon the market in which they are leaders to invest in the inevitable collective paradigm shift.

Thus the man is the only one who realizes their business is doomed to failure, potentially running out of work and money with a family to support.

Finally, completely destroying his happiness comes the news that he is gravely heart ill and has not long to live.

Fortunately, he and his wife took out a particular policy according to which, in case of one of them’s death, the other would receive an identical clone of the deceased consort.

Except that, at the peak of desperation, he succeeds in finding the scientist who created this cloning procedure, who could bring his dreams to life by creating a clone of his imaginary virtual lover.

The terrible fable of global warming

I admit to not knowing director Guy Moshe before seeing LX 2048 from 2020, but I will surely catch up with all his other movies soon.

Indeed his futuristic style greatly amazed me, as did his excellent writing of an exciting, terrible, and ironic script at the same time.

Obviously, we are talking about a low-budget production, which we can see especially in the opening titles with awful animations and special effects.

However, after this intro and entering the actual movie, things definitely change for the better with excellent staging, credible and fascinating costumes, and technologies that create a living and exciting world.

On this future sunlight-ravaged planet, people live high on tranquilizers locked in their homes, working and meeting only within the virtual constructs they cannot separate from.

The plot changes quickly from near-apocalyptic to family and sentimental drama, veering toward the last half hour into a fabulous thriller full of twists and turns.

Fortunately, the director/screenwriter wisely chooses not to make everything overly dark and dramatic, frequently relieving the cruelest situations and scenes with relentless black humor.

Equally cleverly, he makes all the characters different and ambiguous, never stuck in stereotypes of who is simply good or bad.

Each has something charming and funny about them, just as they also have awkward moments that blend perfectly with this cyberpunk science fiction genre.

Indeed, the ambiance provides considerable satisfaction for sci-fi lovers in this big world where we see only through several small interiors, always brightened by wonderful purple and blue lights enhancing the isolation from the outside world.

However, we shouldn’t worry at all since, according to many people, climate change and global warming are just fairy tales…. right?

The future no one will see coming

Leaving aside global problems and returning to the tiny universe narrated in this movie, who are the protagonists of this tragicomic sci-fi dystopia?

Indeed the main character is played by James D’Arcy, a sad man at the end of his life, unable to exist in a chemically cheerful society through medication.

Refusing to take psychotropic drugs, he cannot join the eternal happy-love party of the rest of humanity, blissfully adrift in a world where all personal interactions are replaced by technology.

His marriage to the beautiful Anna Brewster sadly ends before this story even begins when she catches him cheating on her with the sexy entertainment AI in the guise of Gabrielle Cassi.

After this incident, the woman shows no mercy toward her husband, coldly welcoming the knowledge of his disease and worrying only about her financial interests and when the clone will arrive to replace him.

When it finally arrives, we can see a much different acting of James D’Arcy, confidant and charismatic in the role of his copy leading to an exhilarating closing epilogue.

Another character certainly deserves mention is the scientist Delroy Lindo, the paranoid inventor of human cloning and the microchip about to turn the whole world upside down again.

It’s a shame that he disappears without ever returning at one point because I would like to see him in a few more scenes before the end.

As a last one, I want to talk about Juliet Aubrey, the psychologist who supposedly treats the protagonist’s social anxiety, although she will later turn out to be even crazier than him, as we will see in a brief but terrifying flashback.

We cannot say that LX 2048 is a perfect masterpiece, but certainly, it is one of the most intriguing independent sci-fi movies of 2020.

The director establishes the fundamental basis for a fascinating narrative and brings it to life with solid direction and some original ideas, coming to a climax mercilessly closing a story that explores some terrifying possibilities of our future.