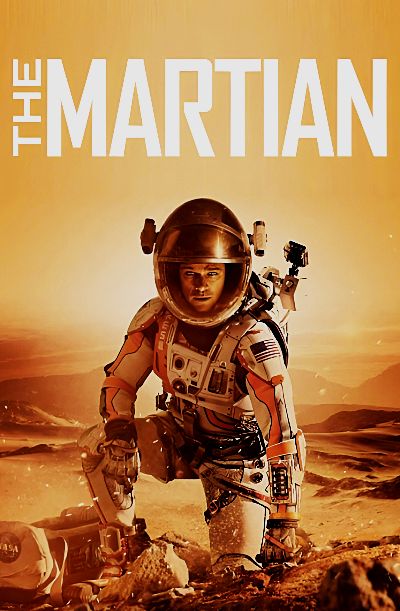 After several stories about aliens arriving on Earth for one reason or another, in this 2015 movie, a human is The Martian on a faraway planet extremely hostile to life.

Indeed it all begins with a NASA exploratory mission on Mars, where the crew must rush off when a sudden storm threatens to destroy their way-back rocket.

Amid the confusion, one astronaut is left behind, pierced by an antenna cable that damages his suit’s instruments for monitoring vital signals.

So his comrades, believing him dead, launch without him, beginning their long journey back to Earth.

The man wakes up alone in front of their now-abandoned shelter/habitat, nursing his wounds and beginning to think about what to do, relying only on himself.

Of course, his first long-term concern is food, as it is inevitable that, despite the many rations left, he will starve sooner or later.

To his luck, he is a botanist, so cleverly, he builds a small potato plantation inside the shelter.

Next, he must find a way to communicate with NASA, even though the agency has already discovered he is still alive through satellite images.

In the vast desert, he finds the small Pathfinder rover sent in 1996, which fortunately still works and allows him to send some photographs back to Earth.

To gain time, NASA arranges an expedition to send him supplies for survival until the next Mars mission arrives.

Unfortunately, the supply shipment fails during the launch just when, at the same time, a shelter door explodes due to a malfunction, destroying the survivor’s plantation.

At that point, rescuing the astronaut becomes a race against time while his comrades, still returning to Earth, prepare for a mutiny to reverse their route and go back.

Despite some criticism regarding the believability of particular narrative turns, The Martian was a remarkable success, ranking among the best movies of 2015 and grossing over $600 million worldwide.

I lack the adequate scientific background to know whether the story is believable, yet what matters is that it has enough plausibility for a science fiction movie.

In comparison with other space survival, such as Gravity, for example, I found a less monotonous pace and many better-described characters.

There is little to criticize the staging and skill behind the camera of Ridley Scott, whose talent is always glaring, even in his less successful movies.

In this case, the director can count on Drew Goddard‘s excellent screenplay, which fits very well in the cinematic times of the homonymous novel by Andy Weir.

The story is compelling, without unnecessary characters or sub-stories, while keeping up the concern about the protagonist’s survival.

Because for this reason, the narrative flows smoothly, alternating between the moments when the protagonist Matt Damon is alone and all the other sequences on earth where they try to find a way to save him.

Scott chooses a montage with several fantastic classic disco songs in the soundtrack in favor of entertainment, building a fast-paced and enjoyable movie without ever being boring or pretentious.

However, this choice does not ignore the drama, lightly describing the alienation of a man entirely alone for a year and a half on Mars.

In addition, it was fascinating to learn some trivia about NASA‘s background and policy in handling communications with the public.

Unlike other occasions, I join the crowd by awarding a suspenseful and entertaining sci-fi movie, where for once, we also see China and the U.S. working together for a common goal.

How many stars are among the stars?

Without a doubt, the main character is Matt Damon, practically alone for the entire first half hour of the story.

It is only easy to hold the stage with proper charisma, and the formerly Will Hunting delivers a convincing and exciting performance.

Although with a few dramatic moments, the actor keeps an ironic and playful nuance in line with Ridley Scott’s narrative style.

After everyone discovers he is still alive, the various NASA characters enter the scene, with at first-place director played by the ever-reliable Jeff Daniels.

As the NASA female faces, we have Kristen Wiig (spectacularly funny in Bridesmaids) and the young Mackenzie Davis, who we later see as a stoic half-robot warrior in Terminator Dark Fate.

The fellow astronauts return n the story’s second half, led by the convincing Jessica Chastain, consumed by guilt at having abandoned a colleague on Mars.

I am also impressed by the friendly Michael Peña, seen in charge of writing to his lonely friend once communications are re-established, acting as spokesman for the entire crew.

Unfortunately, these astronauts are described a little too quickly; otherwise, they would have been more multifaceted and fascinating, although the actors are all doing an excellent job of making them at least enjoyable.

For example, I was intrigued by Kate Mara, an excellent actress I already recommended in 2016’s Morgan, a debut feature by Luke Scott, son of today’s director.

Whatever the case, these characters form an inspiring group, the true essence of 2015’s The Martian, working as a team to rescue one man in this movie.

Could this be forever Matt Damon’s destiny, given Saving Private Ryan’s incredible success?

Time Bandits – The Many Comic Periods Of...