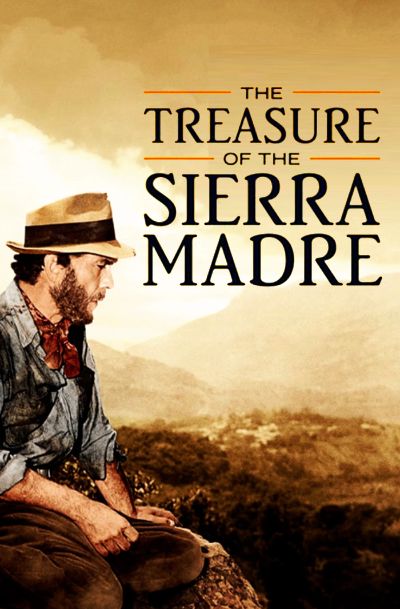 We all dream about wealth, although no one can know how far they would go for it, just as happens to these 1948 movie protagonists, The Treasure of the Sierra Madre.

This adventure begins with Humphrey Bogart wandering penniless through the streets of a desolate Mexican town.

Reduced to begging for food, he eagerly accepts a proposal to work hard on a construction site along with other poor people like himself.

Except his employer turns out to be a crook, fleeing before paying them as soon as they return to town.

With a defrauded coworker, they find this phony contractor and beat the crap out of him to get paid.

Both are more relaxed with some money pocketed, but they are still concerned about running out of nothing within a few weeks.

So they follow the example of an old miner they met the night before, arranging a trip to the heart of the mountains to look for gold.

Neither of them has experience in the business, so they invite the old man to join and guide them in their quest and suggest the equipment to buy.

The journey is extremely long and dangerous; Mexican bandits attack them before they even get off the train.

After a long wander in the desolate hinterland, just when they are exhausted and on the verge of giving up, they find a rich vein of gold coming down the valley from the top of the rocks.

So they laboriously begin digging and collecting the dust, which, when sold to refiners of this precious metal, will earn them many thousands of dollars.

Sadly, it also begins the suspicions, and each hides his loot share, fearing that others might steal it and escape.

Like always in human history, money always divides everything that unites men.

What really is a treasure?

Although the premise suggests classical Western adventure, The Treasure of the Sierra Madre is a 1948 movie much more dramatic and dark than it may seem.

The Mexico of the early 1900s, portrayed by John Huston, has very little romantic about it.

It is a no man’s land where encountering the police can be as dangerous as clashing with a criminal gang.

Even more pessimistic is the issue of friendship crumbling before greed and paranoia, perfectly carried by a superb Humphrey Bogart in one of the complex roles of his career.

In a resounding performance, the actor plays out a frightening metamorphosis, placing the questions we would never want to face before us.

The question on the table is simple: what would we do if we could become immeasurably rich, even at the cost of losing our goodness and honor?

All of us would like to be sure of the answer; just as Bogart’s character is confident at the beginning, he is honest and sincere toward his companions.

However, it is only when all of them are facing a mountain of gold that their true natures come out, unfortunately, in the most violent and unthinkable ways.

John Huston is a master in handling the plot by alternating the dramatic parts with action and adventure sequences with a pleasant irony that never strains the narrative.

The treasure hunt then becomes a pretext for analyzing these three different figures and their personalities, as well as the actual concept of a treasure.

What does it profit man to gain a fortune if he then loses himself?

This is a not trivial question because, in the end, the difference is between those who would do anything for money, against who accept having lost everything even with a resounding laugh.

The hilarious wit of god and nature

I have already mentioned Humphrey Bogart‘s outstanding performance; being a great admirer of this actor, I must emphasize his remarkable acting depth again.

In part, this is no doubt due to the excellent direction and screenplay of John Huston, making another masterpiece in his long and prolific filmography.

Still, we also recognize Bogart’s courage in stepping out from his comfort zone as the charming noir detective and getting into the skin of a kind-hearted beggar upon whom the prospect of wealth devours his mind and conscience.

On the other hand, Tim Holt plays a simpler character, although this does not mean his evolution is trivial; indeed, in the surprising ending, he somehow succeeds in being positive beyond any misfortune.

The two actors above are an unusual pair of friends slowly becoming antagonists, albeit after struggling and fighting side by side to defend their treasure.

Walter Huston‘s character is a mediator between these characters, so when he ends up elsewhere, the situation escalates violently.

From the beginning, this old prospector tells us what happens to men blinded by greed, reaching the point of doing things unthinkable just a short time before.

Concerning the supporting cast, we prize the brief but intense appearance of Bruce Bennett as a negative and meddlesome character toward whom; however, we feel empathy knowing the sad personal background.

Equally good is Barton MacLane‘s role as a hustler with an endless gab who is also good at fighting, almost overpowering the two main characters by his own strength alone.

All this and more make The Treasure of the Sierra Madre one of the immortal western masterpieces, a 1948 movie still strong today because of its visual and narrative power.

It is a decidedly different glance at precisely what the rush for gold in the Mexican Eldorado really was, where men become snakes ready to slither through the dust and betray all that they are and know.