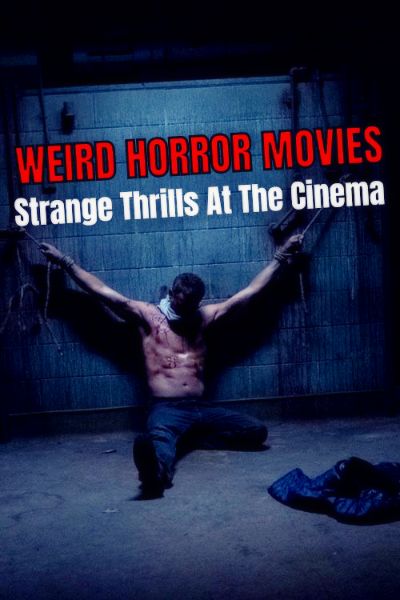 Today I want to propose something different to all horror movie lovers, always looking for the thrills and tension that give us weird excitement.

Nearly always, what makes the difference in this cinematic genre is the skill and creativity of the director since these stories rarely shine with extraordinary originality.

Indeed, frequently they recycle things already seen, such as haunted ghosts, demonic possessions, or various serial killers, as a source of inspiration.

Even the idea behind movies like Stanley Kubrick‘s The Shining, to name one of the more famous, is another tale about a haunted house we have seen a thousand times.

It is another matter, though, how the director chooses to remix these overused narrative ingredients in his movie, as we shall see in the bizarre horror we are about to discuss.

So put your precious silver bullets in the magazine, fill your canteen with holy water, and polish your crucifixes; because now the monsters have arrived on the scene.

The first thrills are given to us by a little-known Italian filmmaker, Lorenzo Bianchini, a talented and original author who, unfortunately, is always ignored by large-scale distribution.

It begins with a wildlife naturalist in a small forest in northern Italy, tracking the movements and behavior of nocturnal animals by placing hidden cameras.

When he reaches a river on the edge of an abandoned village, he finds an unusual number of dead animals and strange markings on tree bark.

Deciding to investigate further, he crosses the ford in his car and reaches the half-destroyed remains of buildings in that ancient village.

At night, he spots suspicious activity from the monitors and ventures outside, hearing strange noises behind those walls where no one should be.

The next day he discovers he cannot go back, as rain raises the river level making it impossible to cross.

Increasingly alone, tired, and afraid, the man will have to face a frightening menace slumbering since World War II.

Lorenzo Bianchini crafts a bizarre horror movie with little more than three actors, a forest, and some houses almost on the verge of collapse.

Still, the cinema’s essence lies in the dark, natural photography of the locations and the choice to tell this story through images and a grim isolation atmosphere.

In the editing, a few dialogues alternate between a couple of old men, functioning as a link between this gloomy little town’s past and present times.

My only criticism goes to the main character Marco Marchese, who is good at playing his role but with an unbearable voice that, fortunately, we hear little or nothing during the movie.

In short, we are talking about an authentic cult to take as an example and inspiration for those who may aspire to direct an extremely low-budget horror movie.

I am more than sure nobody knows this movie since it is one of the most weird horror thrillers I have ever seen.

Indeed the protagonist is an ordinary clerk, married and having a quiet life, who one day discovers a perverse pleasure in stuffing the most disparate household objects inside his butt.

Supernaturally, there seems to be endless space in his rear end to accommodate anything, even going far to put in his neighbor’s small dog.

This secret pleasure becomes an obsession, reaching the point of kidnapping into his secret lair a child visiting with his class at the office where he works.

From the start, he becomes friends with the detective investigating these strange disappearances, who is suspicious of him because of some small clues leading back to his home.

When the cop survives by sheer luck from being sucked into the maniac’s sphincter, a no-holds-barred struggle begins between them, culminating in a literally explosive climax.

Butt Boy is an insane horror that springs from the weird mind of Tyler Cornack, who writes, directs, and stars in a movie entirely outside the box.

As crazy as it may seem to even conceive such an idea, the story succeeds in being intriguing and engaging right up to the last minute.

In the final part, we veer almost into fantasy, with the protagonist’s captives prowling the gutless depths like a fetid circle of hell.

Of course, it takes stomach (to say the least) to watch such a movie, yet if you venture to start it you may discover a once-in-a-lifetime adventure of strange entertainment.

Despite the holidays being over, we face a spooky Christmas vacation in the next movie for a horror of weird abandonment and desolation.

The protagonists are young lovers willing to spend the weekend snowboarding at an isolated resort in the Caucasus Mountains.

It was supposed to be the vacation of a lifetime for two extreme sports lovers like them, and he also wishes to make the crucial marriage proposal.

Right from the start, however, there is a strange vibe in the ambiguous attitude of the hotel staff, seemingly spying on them, making the girl uncomfortable.

Once outside in the open, the pair stop thinking about it, enchanted by the landscape of the long-awaited pristine snow on which they can’t wait to sprint like mad.

But suddenly, amid all that white nothingness, the dream becomes a nightmare when a madman in a snowmobile attacks them.

Trying to escape, the couple gets separated in a storm, and the girl begins an endless ordeal as, minute after minute, she grows weaker from cold and despair.

Director Stanislav Kapralov creates a dark atmosphere paradoxically succeeding in being almost claustrophobic, albeit bathed in the vast spaces of dazzling white of the Caucasian mountains.

This strange horror film is not one with rivers of blood or demonic beings emerging from the depths of hell; instead, a movie that brings a bizarre bleakness to the beat of Frank Sinatra‘s eponymous Let it Snow.

I love these black fairy tales where a few characters’ dramas come on a collision course, set in the wilderness as beautiful to behold as cold and indifferent to miserable human suffering.

In the tremendous cinematic circus of tension and fear, we can say this little gem satisfyingly finds its particular niche.

After I almost didn’t believe in it anymore, Demonic marks the comeback of a director I’ve been waiting for, Neill Blomkamp, unfortunately at rest since 2015 after the underrated and mistreated Chappie.

Although it is a horror, the director does not forsake his usual sci-fi style by forging a weird exorcism and high-tech movie.

Indeed, the protagonist is the daughter of a homicidal maniac who has been in prison for years after carrying out a massacre in the hospice where she worked.

When her mother finally falls into a catatonic state, a mysterious scientific organization offers to try an experimental therapy to talk to her.

Using a computerized construct, the two women will finally be able to meet inside a virtual reality built upon their memories and dreams.

However, after the first touching encounter, the protagonist realizes she has also brought something back with her.

Strange signs and visions haunt her, fearing she will go mad like her mother and believing an actual demon wishes to take over her body.

Except the mysterious organization is secretly a modern circle of expert exorcists resolved to send the evil entity back to hell at any cost.

Although it has been 50 years since William Friedkin‘s celebrated The Exorcist, demonic possessions in cinema are not about to go out of fashion.

Neill Blomkamp remixes all the typical ingredients of the genre by adding his personal touch to the pacing and sci-fi mystery staging.

The result has failed to be successful in theaters due to poor distribution and marketing, unable to capitalize on the director’s name, who still has a devoted following.

However, being a small independent production, it probably did not need the box office of a blockbuster, so let us hope that our mistreated director can return to work soon.

We conclude by attempting to lift our spirits with a story amusingly combining classic Christmas stereotypes with old Die Hard-style action.

However, I wanted to place it among the most weird horror movies of recent times, warning you in advance about the many bloody splatter scenes in case you ever want to see this movie with your kids.

It is New Year’s Eve, and we are in the large mansion of a rich and powerful family, where the children in need of money pay homage to the mistress of the house for her favors.

Suddenly, this fair of human squalor is interrupted by a pack of criminals who storm in with guns blazing, slaughtering the security guards and taking everyone hostage.

The handful of robbers aims to open the family’s wealthy private vault, where the sullen grandmother keeps a pile of millions of dollars.

None of them came to terms with Santa Claus, who just then was coming down the chimney to leave the usual presents under the tree.

Except in this story, the nice fat man was formerly a fierce Viking warrior, turning to light and devoting himself to good deeds after meeting his wife.

To save the only good little girl in the house, the man must go back to his roots by once again wielding his relentless war hammer.

At the helm of this atypical Christmas movie, we have Tommy Wirkola, whose bizarre horror Dead Snow we had already widely recommended.

Serving as Santa is the amusing David Harbour, one of the most beloved protagonists of the popular series Stranger Things.

The actor fights with a violent, ironic splatter ripping apart the bad guys led by the excellent John Leguizamo, a former star in some of Brian De Palma and Spike Lee‘s best movies.

As mentioned, it is certainly not a kids’ movie, as none of the titles recommended today are, but even kids will grow up someday, and you can enjoy watching it with them.