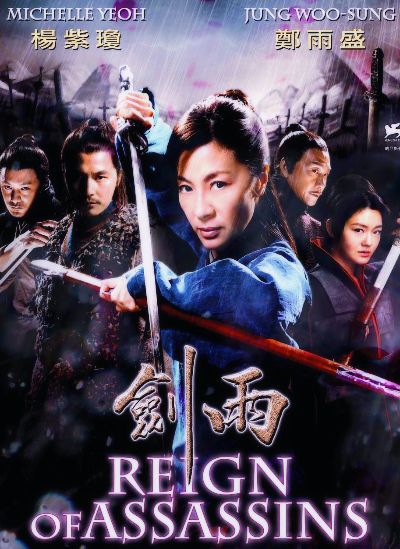 If you love costume movies, epic characters, and plenty of fighting, you certainly cannot miss 2010’s Reign of Assassins.

This strange mix of historical and fantasy genres has many characters and sub-stories, all revolving around a sect called the Black Stone for one reason or another.

The members of this sect are assassins with powerful and unique combat skills whose goal is to find the remains of an ancient warrior monk named Bodhi.

When they discover half of the corpse is in the hands of an influential Chinese politician, they invade his home and mercilessly slaughter his family.

Only then, however, their best assassin betrays the sect, hiding the precious loot and starting a new life under a false identity after a long and painful process to change her appearance.

She takes a house in Beijing, meets a humble merchant with whom she falls in love, and then decides to marry.

Unfortunately, one day, while they are at the bank for their ordinary business, a group of robbers breaks in, and the woman must deploy her exceptional warrior skills to save her husband.

So the cult discovers her location, and three assassins arrive in town to hunt down the traitor and make her confess where she is hiding the body half she stole.

Indeed, their leader is still obsessed with finding Bodhi and reassembling the corpse because, according to legend, this ritual would lead to being the absolute master of martial arts.

Moreover, he will be able, just like Bodhi, to heal from any wounds and illnesses, even regrowing limbs and body parts lost in battle.

Of course, the leader will also meet within the sect other enemies ready to betray against whom he must fight to obtain this immeasurable power.

From Hollywood to China along the line of a sword

His comeback kicks off with the two-episode movie Red Cliff, followed in 2010 by this sensational Reign of Assassins, which he co-directs with colleague Su Chao-pin.

The latter is also in charge of writing the screenplay, which succeeds in being simple and easy to follow despite the multiple characters involved.

In addition, the repeated theme of facial changing and dual identity is obviously a callback from Face/Off, the most successful blockbuster of John Woo’s American period.

The pacing of this adventure is what I love in this action genre, detailing the background of each situation and then suddenly exploding into spectacular fight sequences.

If you have an audio sound system, the clash of blades and the blows involving these warriors’ differing abilities is a delight for the ears.

However, this is not mere action just for entertainment, as each duel comes with a soul and personal emotional drama lying underneath.

It is needless to point out the elegance of the costumes and the remarkable stagecraft, a domain where Eastern productions always distinguish without fear to confront comparisons with the West.

This realistic construction of the cities and the assets of the time blends perfectly with the character’s fantasy exaggeration and their hyper-human skills, creating a world of exquisite entertainment.

Unfortunately, in Europe and America, this movie had very little distribution, something I need help understanding given the immense success of Crouching Tiger, Hidden Dragon in 2000.

I can only imagine that, perhaps, someone was still angry with John Woo for leaving the gilded cage of Hollywood, owing him one last release tax.

So much love and so much revenge

As mentioned, the movie opens playing on the shifting identity motif, with the protagonist initially being the beautiful and skillful Kelly Lin.

The actress makes the most of the story’s initial introduction, eventually giving way to the more famous Michelle Yeoh after the medical procedure by which she changes her face.

As usual, the Oriental star is excellent in all acting fields, from dramatic tension to romantic passion, and her skill in physical action scenes.

Equally good is Jung Woo-sung, who initially seems only a comic complement and romance ingredient within the cast.

Later, however, he also demonstrates his power and reason for existing within the large plot, revealing him to be a character who is anything but trivial.

Even among the villains in Black Stone, there are several worthy opponents; above all, we place the evil boss Wang Xueqi.

However, his motivations are not just the simple desire for power and conquest, claiming Bodhi‘s corpse for something much more intimate and personal.

In this sense, the relationship with his sexy pupil Barbie Hsu is quite intriguing (and also terrifying), between complicity and an unexpressed love despite both being ruthless murderers.

The others are equally capable and resolute, such as Shawn Yue and his deadly poison darts, who nonetheless dreams of a peaceful life with his wife and child.

Much more ambitious is the magician/warrior played by Leon Dai, who helps the boss to betray him and use Bodhi‘s power for his own interest.

Although this rich cast of wandering assassins stems from the usual Wuxia genre stereotypes, the filmmakers’ ability to handle small details makes the mixture fresh and exciting.

For all these reasons, Reign of Assassins is one of the most exciting yet resoundingly ignored movies of 2010.

Everyone will be able to find something they love in this story, from fast-paced action to romance and epic drama, packaged in an elegant wrapper with the magical colors and feel of the far east.

Midnighters – The New Year Begins At Its Worst