Midnighters – The New Year Begins At Its Worst 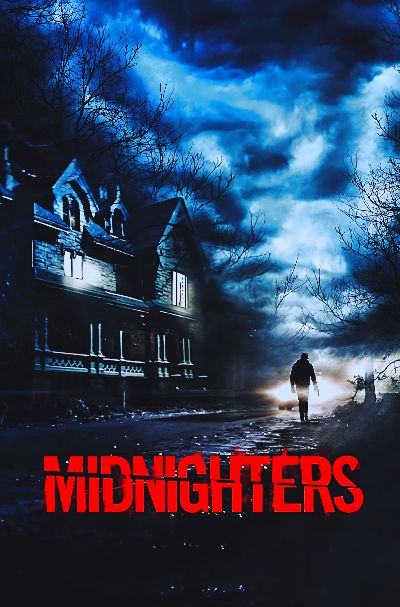 This article comes out on New Year’s first day, when many of you may be returning from the night-before party as the characters in this 2017 movie, Midnighters.

On the way to their beautiful home, still under construction, this couple has an accident just during their first moment of intimacy after a long time of unhappiness.

Both had been drinking heavily at the party they were returning from, so they selfishly decided to go home and sober up before taking the victim to the hospital.

His condition, however, is more severe than it seemed, and as soon as they park the car in the garage, he dies in the back seat.

Fearing being charged with vehicular homicide, they agree to dispose of the body and clean up all incident traces.

Not being an experienced criminal couple, they realize their car’s license plate has detached too late, remaining at the accident location.

So the next day, the police show up at their house demanding an explanation, listening to their bogus story of how they ran over an animal.

The two officers at the door do not fully believe their words, yet they leave without accusing them of anything.

Likewise, someone else is on the trail of the man they killed, who they later discover was headed right for their house.

Indeed, the wife’s sister, who recently moved in with them, has gotten into trouble with some dangerous criminals, stealing something valuable without even realizing it.

At that point, the house becomes the focal spot where these characters’ destinies intersect as they fight for their lives and their greed, including both wife and husband ending up against each other.

The promising first effort of a new filmmaker

I read everywhere highly hostile critics’ and audiences’ opinions about this cinematic debut of Julius Ramsay.

Instead, I highly appreciated Midnighters and consider it among the most exciting thrillers of 2017, revealing many intriguing facets and some flaws as is typical for his career’s first movie.

Until then, the director only worked on shooting and editing series such as, for example, The Walking Dead or the TV adaptation of The Purge.

Supporting him was his brother Alston Ramsay, writer of the screenplay with an excellent underlying tension constantly and ominously hovering above the entire narrative.

Despite having a clearly derivative inspiration from similar movies such as I Know What You Did Last Summer, the plot soon veers in directions we do not expect.

Moreover, the ambiguous characters are far from trivial, and indeed their personal dynamics get irrecoverably worse by the minute.

So don’t expect the magical catharsis of the couple in marital crisis or a happy reconciliation with the lurching sister who had run away from home.

Several times the victim and offender roles flip, changing the rules of a story we thought to have figured out, surprising again with an unexpected twist.

Alexander Alexandrov’s exquisite cinematography gives an ice-cold feel to each scene, emphasizing the total absence of passion and happiness in all these characters’ lives.

For the more impressionable, we emphasize the presence of some violent scenes, only in a few moments, which, however, have a powerful visual shock effect.

This movie has all it needs to be a more than a decent psychological thriller with small horror peaks, marking the debut of a director whom I am curious to see the growth.

I can’t understand the criticism of this low-budget production for a non-banal entertainment story better than many similar ones during the same period.

Never trust anyone you are closest to

Since this story relies upon the various protagonists’ psychology, we must praise these actors’ excellent performances as they face each other constantly.

The main characters are the unhappy couple Alex Essoe and Dylan McTee, fresh from a bleak New Year’s Eve party where neither seems to have had much fun.

She has a good job and a promising career in a bank, while he is an unemployed man doing little besides renovating the house.

Although they seem complicit in covering up their crime at first, they become increasingly estranged as the danger mounts and the prospect of a rich haul grows.

Adding more chaos to the drama is the character of the young Perla Haney-Jardine, an actress I had already admired for her role as Steve Jobs‘ daughter in Danny Boyle‘s movie of the same name.

She will be the one to unwittingly bring tragedy into her sister’s quiet life, with whom she has a delightfully conflictual and loving relationship at the same time.

However, don’t be fooled by her innocent appearance because she has something to hide and will make unexpected decisions in the most challenging moments.

Finally, let’s talk about the excellent Ward Horton, who plays the craziest and best-written character in the story, even though we know almost nothing about his past.

Although he shows up in a friendly manner, we immediately realize from the mad sparkle in his eyes there is something seriously wrong with him, as the other protagonists will later painfully discover.

I can’t talk about this movie without spoiling something fundamental, except to conclude by praising the excellent (never intrusive) music by Chris Westlake, creating a fantastic atmosphere.

Like any movie in this genre, Midnighters‘ plot sometimes defies credibility, yet it stands as one of the 2017 best thrillers.

So let’s wait and see if Julius Ramsay will return to theatres one day or if it was just an interlude, enjoying this excellent family drama with tasty horror nuances.

Romance Adventure Movies – Action And Love On The Run Together