Tracks – A Lonely Journey Through The Beautiful Deserts Of Australia 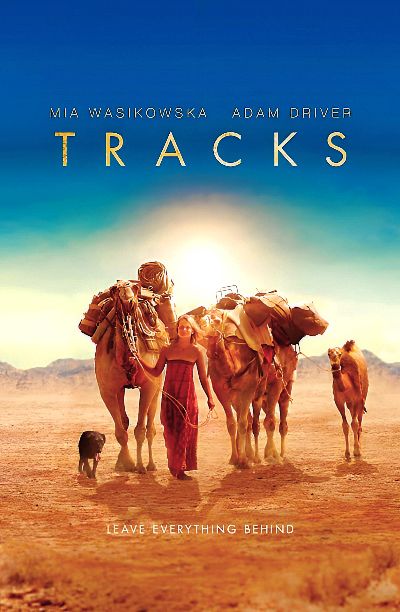 Some journeys where what matters most is the road we travel instead of the destination we must reach, as happens in this 2013 movie about a real-life event, Tracks.

Indeed the story follows the eponymous book by Robyn Davidson, a writer/traveler who began her successful career with an epic 1700-mile trek across the desert to the Ocean at the other end of the continent.

When she was 25, she first sought work in northern Australia, humbly accepting a job as a maid in a small hotel and then moving into employment for a camel breeder.

On the promise that she would receive what was necessary for the long journey, she made the most of the experience in that place by learning everything possible about the animals with which she would cross the desert.

However, after two grueling years of hard work, the owner disavows his promise and kicks her out without giving anything to her at all.

Disappointed, she moves to another ranch, learning how to survive and navigate the desert from the kinder, more helpful local men.

Returning to where she had been banished, she finds a new owner agreeing to give her the camels she is entitled to in exchange for help and experience in ranching.

At that point, all it lacks is money to buy supplies, yet with the help of a young National Geographic photographer, she receives a valuable check for $4,000.

The agreement is to have him follow her on the journey, meeting along the steps and documenting everything with his trusty camera.

Initially, she can’t bear him, finding the man irritating and disrespectful of the traditions of the local culture.

But ultimately, he will be the one to wait for her, keeping the rest of the annoying and noisy international press away.

In the great nothing of the desert we can find everything

To sum up, in a few words, a movie like Tracks from 2013 is an experience of peace and spirituality; however, walking together with a lonely soul who cannot find peace.

Indeed, many characters ask this girl why this journey is without her ever giving an answer.

Through some flashbacks, however, we understand some facts about her difficult childhood and how she is constantly searching for something.

What is she searching for? The answer lies in the actual journey itself, where each step in total loneliness will confront herself.

But this solitude may not be the kind she seeks, as it is broken by the constant interventions of the photographer with whom she has a wonderfully complex relationship.

First, she can’t stand him, then she feels him close and even makes love, only returning to despise him again but still changing her mind and eventually accepting his friendship and helpfulness.

Like the long journey in the desert, this girl’s mind and heart are never simple, as her solitary nature leads to isolation from the hustle and bustle of so many people.

For us viewers also, this movie is a long love postcard from Australia, where there is scarcely a presence of human society in the beautiful landscapes of this wilderness.

Along the way, we meet the local Aborigines, learning about some of their traditions and their poor yet honest and honorable way of life.

One of these men, for example, will accompany her along the route among the sacred lands, where women are not allowed to travel alone.

However, there will also be plenty of pesky tourists, always with cameras in hand, too busy capturing fake moments of happiness instead of bothering to actually experience them.

Director John Curran gives the proper slow pace to this movie, using natural photography and minimal yet very pleasant music to accompany it.

Perhaps some flashbacks are unnecessary, basically telling the same episodes over and over again, such as the problematic relationship with the father and the affection between this woman and her dog.

Obviously, the major work lies on the shoulders of the protagonist Mia Wasikowska, who is ever-present in every scene with her innocent appearance; however, she has already suffered too much despite her young age.

Her desire for solitude leads her to walk naked through the desert, careless of the heat that even camels struggle to endure.

Nothing can stop what she sees as atonement for the guilt we do not recognize, along with a desire for total merging with nature.

Half the director’s work consists of constantly filming this strange but talented actress, while the rest of the time framing unforgettable snippets of the Australian lands’ splendor.

Adam Driver occasionally interrupts this catharsis with nature, whose presence brings back the civilization from which she so longs to get away.

The actor is, as usual, perfect in this role, though he is intermittently there, bringing some genuine sympathy and human misunderstanding to a story that would otherwise be overly serious.

Several times the girl admits that she is ashamed to accept money from National Geographic. Yet, this paradox may help her later return to society, beginning a new career as a writer on each of her journeys.

It is precisely through Robyn Davidson’s diaries we can remember the annoying noise of so-called civilized culture, where every voice wants to overpower others in a show of stupid ambition and selfishness.

Tracks is a movie that only some were ready for in 2013, but whose message is both ancient and modern, namely a timeless desire to know ourselves and our limitations.