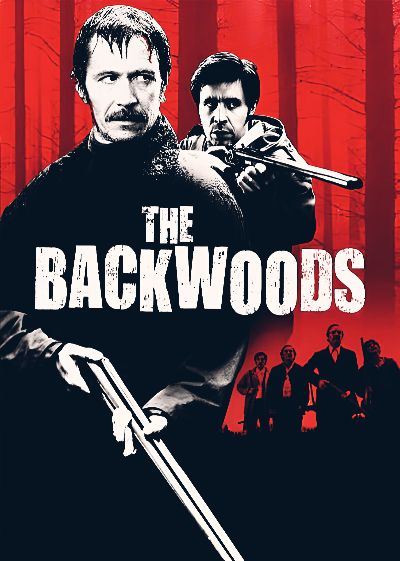 How many times have we seen movies like 2006’s The Backwoods before, where some tourists on vacation suddenly must fight against a group of strangers to survive?

Yet, you can still tell this kind of story excitingly and originally, as that recipe we cooked so many times tastes different with an extra ingredient or another preparation.

The main characters are two married couples, one renovating an old farm with a barn in the middle of the North Spanish woods.

Instead, the other couple is facing a tough period after the death of their child, with the wife becoming increasingly shut off from her husband.

As they arrive at the edge of the woods, they briefly stop at a small pub to rest, remarking the immediate hostility among the locals.

In addition, some stare creepily at the two women, especially the younger, more attractive ones who enter the pub, silencing everyone.

However, they drop this strange situation, traveling down the long path to the isolated house.

The husband tries to make peace with his wife, wishing to have another baby, but it is complex since she refuses any kind of intimacy.

To get his mind off it, his friend takes with him the next day to hunt some rabbits in the forest.

However, deviating on the way back, they find another road leading to a shack in terrible condition, inside which a door is locked with a chain.

From behind the door seems to come someone’s whimpering, so they break the lock and find a child captive in a straw-covered room.

Not knowing what else to do, they flee away intending to report her to the town police, unfortunately not knowing there is someone just coming from the town in search of the little girl.

A flavorful thriller in Spanish sauce

I admit to only recently having seen The Backwoods, although it came out in 2006, being intrigued by the movie’s cover starring Gary Oldman.

As young as I was, I have always adored him in Francis Ford Coppola‘s splendid Dracula, up to the more recent The Laundromat and Tinker Tailor Soldier Spy, which I also recommended.

Although he is preponderant on the cover, he plays a secondary role since the main characters are the couple Paddy Considine and Virginie Ledoyen.

Being a movie with a Spanish soul, I warn you immediately to expect a very European thriller aiming above all at the psychological introspection of the various characters.

If you are sensitive about violence, you can rest assured that, although the killings and tension are not lacking, there are no excessive gory or splatter scenes.

Even the most negative characters are not the usual maniacal, murderous monsters in The Texas Chainsaw Massacre style; instead, as minutes go on, we understand their motivations, however crazy they may be.

Despite, as we said in the opening, it may seem a story already seen, what I appreciated most are precisely the unexpected twists and turns in the plot.

In addition, even the characters’ behavior strays from the usual stereotypical situations, with no victims already destined for certain death or awkward pursuits by killers stumbling at the crucial moment.

Director Koldo Serra captures with natural light and cinematography a location that needs no tricks to be beautiful and even eerie.

I would have appreciated more references to the period where the story is set, 1978, not coincidentally my date of birth but which I saw poorly exploited in the dialogues and situations.

We also note how the dialogue alternates between English and Spanish, keeping us viewers as to what is going on.

Quiet lives in the forest

Although I greatly admired Koldo Serra‘s directing and screenplay work, he could expand the portrayal of the couple Gary Oldman and Aitana Sánchez-Gijón‘s relationship, in my opinion.

We understand from some of the woman’s brusque attitudes and phrases that even their marriage is not as blissful as it seems, yet unfortunately, at some point, their paths split forever.

Indeed, she doesn’t seem very happy living in that forest; although the scenery and the house are lovely, the isolation is too much for city people like them.

The couple with Paddy Considine and Virginie Ledoyen is much more interesting, starting with a problematic situation and then seeming to settle down with a violent act he commits to defending her.

Toward the end, we again see the tension that may lead to their separation, especially in the final standoff/duel with an opposite stance despite being on the same side.

I loved the distinctive narration style of this story, without even explaining the issue’s root genesis, such as the origin of this little girl or the strange behavior of all the villagers.

In addition, the editing flows smoothly to follow, and the music is almost absent, letting nature’s shifty nature speak through the woods and, of course, the characters’ dialogues.

Many of these characters are actually less cruel than they seem and what they think to be, upon which is the villagers’ leader, played by the excellent Lluís Homar.

Nevertheless, the story remains ruthless, and it is no coincidence that the line that immediately catches our attention comes from Gary Oldman:

There are hunters, and there are prey, Norman. That’s the only fucking truth in this world.

I only want to tell you a little about The Backwoods to avoid spoiling its surprises, except to conclude by passionately recommending this 2006 movie to those who enjoy different-than-usual thrillers and European cinema.

Tracks – A Lonely Journey Through The Beautiful Deserts Of Australia