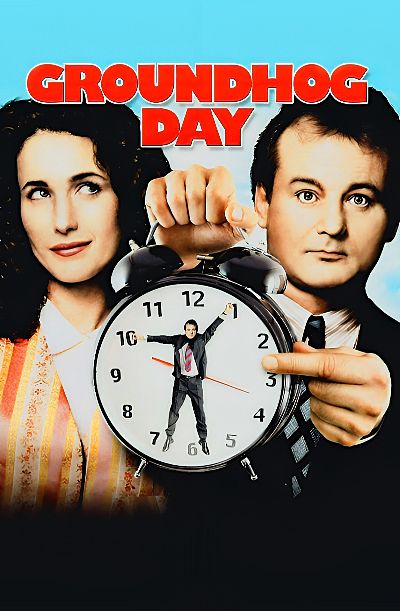 Beneath the holidays, some days seem endless, yet never so much as in this unforgettable 1993 movie, Groundhog Day.

The Groundhog in question is the iconic idol of a small town in Pennsylvania, where a television crew stops by for the day when the entire population celebrates it.

In charge of the crew is a gruff weather guru who is as smiling and seemingly lovely as he is actually selfish and sour in attitude.

Helping him is an awkward cameraman and a pretty, kind young producer who despises the protagonist at first sight.

Once they have finished recording the shoot, the man wishes they could return to the city immediately, but harsh weather forces them to stay, so he shelters in the hotel waiting for the following day.

However, the following day magically turns into the previous one, so he finds his colleagues waiting for him again to interview the famous Groundhog.

Initially, he believes to be mad or has a brain disease, even going so far as to commit suicide when he can’t take it anymore of reliving the same day repeatedly.

Even death does not break this endless loop, and he cannot escape the city because every road is blocked by stormy weather.

Having no way out, he decides to fully enjoy this strange phenomenon by indulging in all kinds of excesses, including relentlessly courting his beautiful producer.

The girl, however, is immune to his charms, despite him memorizing everything she pleases, ditching him each time alone without giving the love he craves.

At that point, something awakens in his consciousness, beginning to really help all the people in this strange little town he had never bothered to get to know.

Slowly, he will become a better person by trying to make the town a better place.

And who are you going to call?

From 1993 to the present, Groundhog Day still remains one of the best romantic comedies in all of movie history.

Its strength lies in the simplicity of the comic gags within a fantasy story directed and performed by two of the famous old Ghostbusters.

Thanks to Bill Murray‘s brilliance, every joke becomes a moment to learn and remember, capable of making us laugh even the hundredth time we watch this movie.

He turns the whole story into a one-man show that lives through the facial expressions of the neurotic grumpy protagonist.

There is nothing we can do; whether this actor plays the good guy or the unrepentant bastard, he is equally irresistible and funny.

However, let’s also remember the talent of Harold Ramis, who always manages how to frame or come up with every comic moment in this movie.

For the more nostalgic, we can see him again in CGI towards the end of Ghostbusters Afterlife, a reboot of the saga directed by his son Jason Reitman.

Thanks to his perfect direction and screenplay (starting from a subject by Danny Rubin), the pace travels unstoppable, literally flying until the end credits.

I cannot say whether this is the first movie with a time loop in cinema history, but certainly, it is the one I saw first in my life.

From there on, the same formula becomes a true movie genre replicated many other times in many different stories.

For example, we can mention the excellent alien invasion sci-fi of Edge of Tomorrow or the fun horror Happy Death Day, not to mention TV series such as Day Break; unfortunately canceled after the first season.

The infinite day theme has also arrived in video games, with two original titles such as Deathloop and Returnal, just to name a few.

An endless and timeless comedy

As mentioned, the whole movie relies upon the great humor and facial mimicry of Bill Murray, dominating the remaining cast and being omnipresent in every scene of this movie.

However, we must also pay tribute to the soft serenity of Andie MacDowell, especially in the story’s second half, as the perfect sidekick to the protagonist.

The beautiful former model and actress add her sunny charm and a magical touch of romance without making the comedy any duller.

Indeed, although the ending obviously directs toward goodness and redemption catharsis, the story always becomes exciting as Disney’s Christmas story.

Instead, this kind of comedy holds its original sparkle even 30 years later because the writing is so simple and brilliant, and there are simply no flaws to underline.

If in everyone’s lives, the main problem is never having plenty of time to do whatever we wish, we start from the exact opposite principle in this case.

God, fate, or we don’t know what decides to punish this presumptuous man by placing him at the center of eternity in a city he considers dreary and insignificant.

We do not know precisely how many years, decades, or centuries he will spend in this place before finally changing, realizing it is people who matter instead of a successful television career.

Watching this cynical armor shatter is the funniest side, which we could reduce to an endless Scrooge-style night where the only ghost is the protagonist until deciding to really start living.

Just as time does in this tale, Groundhog Day will continue through the years well beyond 1993, becoming an immortal movie carved in stone.

If you should be among the few who still don’t know about it, then run to see it; otherwise, see it anyway because it is always time well spent.

Because 30 years from now, your children or grandchildren may ask you if you know a good comedy to watch, you can recommend this movie that will still be as good today as it was 30 years ago.