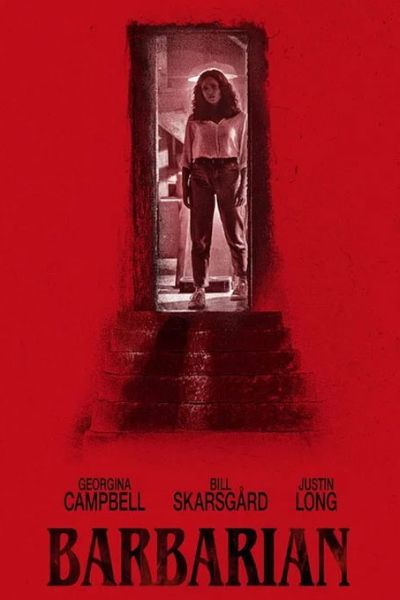 Finding a good home in a distant city can be difficult, as happens for the protagonists of this 2022 horror movie, Barbarian.

Indeed, it all begins with a young girl arriving in a rural area of Detroit, where the only house still in one piece seems to be her rented one.

Unfortunately, the house is already inhabited by another tenant, who claims to have approached the same agency, where they probably made a mistake.

Since it is raining heavily outside late at night, he invites her to rest inside and try resolving the misunderstanding together the following day.

Not knowing him, of course, she is hesitant at first, except then starting to feel sympathy and even something else toward this guy.

He convinces her to be a good fellow, claiming to be one of the personalities in the city’s underground music scene.

Since it is relevant to her research for a documentary she hopes to participate in, she is increasingly excited to have met him.

The next morning, after returning from the job interview she came to Detroit for, she gets trapped in the house’s basement while searching for a trivial roll of toilet paper.

That’s when she discovers a secret room leading to a hallway, where lies the awful secret of why that neighborhood fell into disrepair years earlier.

At the same time, a young California actor is in trouble over rape allegations by a fellow actress, so he decides to sell his properties and raise the money to pay legal fees.

Of course, among these properties is precisely the house where the girl is imprisoned, just as the actor will discover with horror upon seeing it firsthand.

Together they must face a monster born of violence and suffering to leave that world-forsaken place alive.

A good horror… that could actually be more horror

While the subject of the strange house with a hidden monster is undoubtedly not new among horror movies, Barbarian still succeeds in making it attractive in 2022.

Even more than the plot, which is still quite good, what is even better is the fragmented yet effective way the director describes it.

Zach Cregger has a short filmography to speak of in terms of experience and style, except for 2009’s Miss March, which was a reasonably entertaining debut.

In this case, the director changes genres, although, unfortunately, he does not fully embrace horror, which would boost this movie.

We remain in the realm of a mystery thriller with lots of tension but little visual shock, although the construction of the various scary moments thankfully uses very few jumpscares.

I usually can’t stand jump scares, especially from other filmmakers who abuse them because they probably don’t know how to do anything else. However, I found them enjoyable and placed them at the right moments.

The thing which works most is the parts the script divides the story into, narrating three characters whose fates will come together in the tragic fourth ending act.

These three characters are simple but feature solid writing, with no cringy moments weakening, and their motivations fit perfectly into the narrative environment.

Cinematography and natural scene lighting greatly aid in creating the tension I mentioned earlier, maintaining credibility even in extreme situations.

In summary, we have an impressive second effort for a director still searching for his voice yet looking promising for a good future.

A good cast that provides the right thrills

As we said before, the story is in four parts: the first three need to know better the characters, who will then meet/clash in the climax.

It all begins with Georgina Campbell, a young black actress knocking on the wrong door, even though it is the only one still intact in a destroyed neighborhood.

Upon opening it, she finds the equally young Bill Skarsgård, whose obviously we try to figure out whether he is the monster or another victim of the movie.

This first part is the best, effectively relating these two characters’ encounters and all the doubts arising in an unusual situation.

Next comes Justin Long, coming in singing at the top of his lungs like a teenager in his car, only to discover later that he is potentially a rapist.

The actor gives the most convincing performance of the entire cast, having an ambiguous role with many facets suspended in doubt until the final part, where we understand what this man really is.

Finally, we have Richard Brake, who has the right face but whose role is too short and not enough horror to be as effective as the director intended.

However, the actor makes the most of his few minutes to portray a lonely, deranged man with no conscience, who will obviously become the trigger for the whole horrific story hidden in the house’s bowels.

Although the story has a flavor we have already experienced, these characters’ interactions blend these lives’ timelines into separate pieces joining into a horror ending.

Although this second cinematic work by Zach Cregger is intriguing, I have read many opinions around the Internet savaging it mercilessly.

However, today you need to aim for silly stories like the Annabelle saga or The Curse of La Llorona to be sure of success.

So if you love horror flicks trying to be different, even if maybe only partially succeeding, Barbarian is definitely one of the 2022 movies for you.