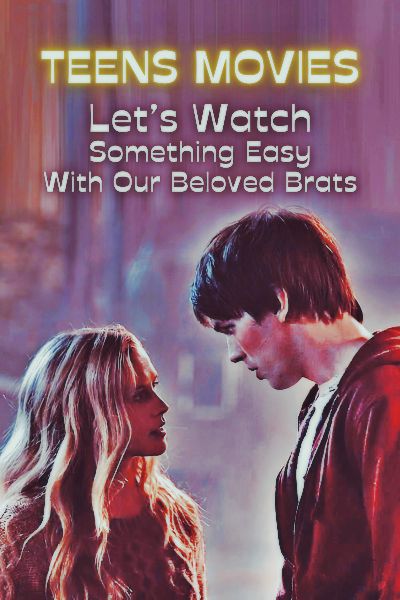 The holidays are a great time to spend with teens since they are often either joyfully busy with many activities or closed off and silent like one of those gloomy characters in some strange movie.

Whether they are your children, cousins, grandchildren, or just the brats of some friend, you will inevitably find them in your way during the holidays.

So it can be helpful to think back to when we were the brats of the situation, something that, as we grow up, fades into the fog of our memory.

What could be better than a good movie to relive those days when we walked around like oddly-haired and dressed teens, looking grumpy and confused as we tried to figure out how the world works?

Today we have something for everyone, from sci-fi to horror with comedy and romance influences, as well as the classic alcohol-, drug- and ass- and boob-filled mega-party we all love but can’t tell in polite society.

So let’s turn up the lapels of our leather jackets from when we used to like to be badasses, or wear the tiniest mini skirt you can find if you want to get back to being party girls once upon a time.

Because now is the moment when the show starts, and the hands of time turn back to the beat of the songs you still think about and hum under your breath when no one is watching.

We begin with a teenager, briefly the most famous star in the cinema world, although I doubt any teen today has even heard of this movie.

This boy lives in poor American suburbia with no grand ambitions or hopes for the future.

His only entertainment is playing a game cabinet called Starfighter, of which he finally breaks any scoring records one night.

As a reward, he receives a visit from the game’s creator, who takes him for a ride in his strange and futuristic car.

Indeed, the car is actually a spaceship the mysterious visitor directs to the distant galaxy under the rule of the Rylan Star League.

As the only Earthling ever completed Starfighter, they entrust him with a spaceship and a co-pilot to begin training and join the fleet.

In that part of the universe, war is underway against the evil Ko-Dan Empire, which has been trying for years to penetrate the immense shield protecting the Star League.

When a traitor allows the enemy to carry out this invasion, the boy has no choice but to defeat the enemy before they inevitably reach Earth as well.

The Last Starfighter remains the best movie from Nick Castle, a director accustomed to entertaining but not particularly memorable movies for teens and surroundings.

Even for the likable protagonist Lance Guest it will be the highest peak of his not-very extensive career.

However, we are at the highest point of digital effects in the 1980s, with almost half an hour entirely computer-generated for the spectacular space fights.

Of course, the story is quite silly ( like all the characters), yet it drips with passion and humor in every scene, making it an unfortunately forgotten cult classic today.

Let us continue with a masterpiece that is not only an excellent movie, it even gave a name to one of the most beloved video game genres of all teenagers in the world.

In a near hypothetical future, crime is rampant, and out of control among Japanese boys, to the point the government establishes a particular program called Battle Royale to contain the problem.

Each year the military forcibly takes a group of students from their classrooms, confining them to an island where they must survive for three days.

None of them have any choice except to fight to the death against their fellow classmates, each having an explosive collar that the ruthless professor will not hesitate to blow up if they disobey.

This professor is none other than Takeshi Kitano, a legendary Japanese actor, and director serving his colleague Kinji Fukasaku and his brother Kenta Fukasaku‘s splendid screenplay.

Of course, the director has been slaughtered by critics and censors around the world, who have cut and re-edited his work into countless versions, uselessly trying to moderate the violence and the provocative underlying social dilemma.

Unlike other similar movies, such as the Hunger Games saga, here we see humankind’s pure and unadulterated evil on display.

Indeed, these students mercilessly slaughter each other in a slasher fashion flavored with all-pervading grotesque humor.

Every theme dealt with in these snippets of life are annoyingly and brutally honest, as youthful discomfort, in reality, is often adult discomfort toward young people who fail to understand.

Battle Royale, on the other hand, is a movie that should be screened in schools worldwide, accepting debate even on all those topics we don’t like to deal with.

As we see in this movie, sometimes it is challenging to be a teenager when you do not really have much popularity and others ignore you.

So three friends decide to organize something exceptional for the birthday of one of them, taking advantage of his parents being out of town and leaving their massive mansion at their disposal.

While trying to get the word out and organize by stocking up on drugs and alcohol, they worry no one will show up at their party.

However, concerns are unfounded because, with the help of a well-known actor, people crowd to their house step door.

At that point, the problem is keeping down the mess and damage the guests are causing, invading every single room in the mansion like an unstoppable river in flood.

When they find a figurine that hides an endless supply of ecstasy inside it, the party degenerates into chaos and then into a full-blown urban guerrilla war against the police SWAT team.

I have read mixed opinions about this movie between those calling it the shameful degeneration of today’s teenagers and others idolizing it as the spiritual heir to the famous Animal House.

Frankly, both positions make me laugh, as it is simply a harmless teen comedy that hurts no one; yet equally, please do not mimically compare it to John Landis‘ 70s masterpiece.

Furthermore, if, unfortunately, copycats were throwing Project X-like parties where kids died, I would blame the stupidity of the latter rather than this comedy.

For instance, I don’t see everyone who likes to watch Superman coming out of a movie theater, diving off a balcony and trying to fly.

After the above-mentioned high-party excesses, we move on to a bizarre horror movie featuring a love story between an unlikely teen couple.

He is a zombie, and she, on the other hand, is the daughter of the anti-zombie resistance leader years after a George Romero-like apocalypse devastated the entire world.

After their first meeting, however, the boy seems reverting to his human behaviors and helps her escape from a pack of even worse monsters.

Indeed, for quite some time, the Boney has been roaming the city, undead reduced to skeletons, even feeding on the same zombies.

Having to hide from the common enemy, their relationship goes from initial terror to shy friendship and confidence, eventually, of course, leading to romantic love.

However, her father is less than enthusiastic about the new boyfriend, so the horror-version Romeo and Juliet must convince the resistance soldiers and the other zombies ( also returning to being human) to stand united in the face of the Boney.

Among the many post-apocalyptic stories, it is nice to see something shyly optimistic, unlike something else that is often heavy-handed and dramatic in its approach to the subject.

Besides being boring, this The Walking Dead-style stuff shows little understanding of the late Romero‘s cinema, dripping with irreverent irony toward modern society.

In this zombie movie, the atmosphere is much lighter and lighthearted, mainly because of the choice of putting two naive teenagers as protagonists.

Of course, the horror is present, yet with humor; such as when the zombie falls in love (even more) with the girl because he eats her boyfriend’s brains.

As I said about the previous movie, at least in theaters, we can laugh about any subject without apologizing to anyone.

We end on a high note switching from horror to sci-fi while staying on topic with a post-apocalyptic movie in which the protagonists are a fierce teen group.

In this case, the apocalypse has brought to earth an alien race unwilling to destroy or enslave humanity, although they do not hesitate to replace everyone resisting their new leadership.

Indeed, the most stubborn humans receive one of these aliens in their necks, resembling luminous jellyfish, which take control of our bodies and memories against our own will.

This symbiotic fusion is only sometimes perfect, as happens to the young girl protagonist, who stays as a voice in the head of the alien who replaces her.

Convincing to betray her species, they find their old friends’ refugees in the mountains, including the human’s ex-boyfriend.

The affair gets complicated when the alien falls in love with another guy, becoming an amusing four-way ménage where the lovers exchange awkward moments of passion and jealousy.

Except a cruel alien hunter is on the trail of her fellow defector, becoming humanly ruthless and cold as she relentlessly hunts her down.

I admit to being among those who formerly felt unbearable about the Twilight horror/romance saga. Yet, in this case, writer Stephenie Meyer creates a much more fun and exciting world to discover.

Moreover, at the direction, we have an expert such as Andrew Niccol perfectly handling the movie’s rhythm, wisely alternating between dramatic tension moments and the lighter teens comedy.

The result can please everyone, from lovers of science fiction to romance enthusiasts, putting everyone on the same page in front of the television for an evening.

So whether you are an alien, human, or other sort of species, just be quiet for once and enjoy the show.

I hope I have made young and old happy with today’s headlines, wishing you happy holidays with or without family and saying goodbye to this long and challenging 2022.

Tough Guys Movies – No One Is Scary...

Director Vs Producer – The Never-Ending...