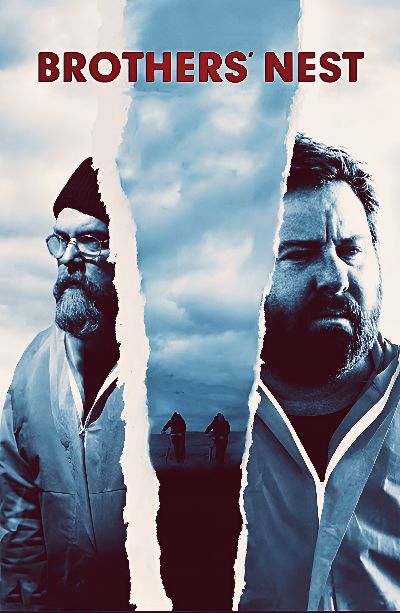 How much trouble family brings into our lives, and how well the protagonists of this quirky 2018 crime comedy movie, Brothers Nest, know it.

It all begins in the cold countryside of a remote county in Australia, where two brothers ride their bicycles along the road side by side.

Their destination is the house where they grew up and where their mother currently lives, although, unfortunately, only for a bit longer.

Indeed, the elderly woman is seriously ill and does not have much time left, busy with another painful chemotherapy session just that day.

Although the brothers appear to be two pleasant and peaceful men at first glance, they are actually about to commit a crime.

Sowing false phone calls, they pretend they are traveling to Sidney while sneaking into the house and waiting for their stepfather to return.

Especially the older brother deeply hates this man, whom he believes is guilty of taking the place of their natural father after he committed suicide when they were still young.

To make matters worse, their mother has already made it clear she changed her will, inheriting everything she owns and even the house to her husband.

Since they both need money, having lost their jobs and facing separation from wife and children, they have no choice about what they should do with their stepfather.

So they decide to kill him, staging a fake suicide to avoid investigation and for a kind of poetic revenge for their real father.

However, the youngest is not entirely sure, feeling a sense of horror at taking the life of someone, even a man he so deeply despises.

While these brothers prepare the crime scene according to their predetermined scheme, something suddenly messes up all their careful planning.

Like in the 2018 story of Brothers Nest, this movie’s principal actors, Clayton Jacobson and Shane Jacobson, are actually brothers.

Although the physical resemblance is unmistakable, their performance brings to life two roles that grow more distinct as the minutes go by.

Jaime Browne‘s excellent script depicts their lives with dialogue and twists, both comic and dramatic, always balanced between believability and humor.

Although the central theme is gloomy and the murderous mood is palpable, the first half is relatively light and funny in the absurdity of the cleaning company-style criminal planning.

We see these men up to something without understanding exactly what it is or why they are doing it.

At some point, however, the story takes a considerably more violent and sinister turn coming to a full pulp in the frantic final act without hope or redemption for anyone.

The relationship between these brothers is indirectly implied rather than explicitly unfolded, suggesting that although they love each other, they have not been seeing for quite some time.

Indeed, both are unaware of the personal and financial problems the other is going through, which is precisely part of why their plan will fail.

Behind the façade of serene and peaceful men are miserable lives, both at work and in the family.

This problem stems from the family in which they grew up, at least if we listen carefully to what they recount while talking about their mother and stepfather.

When we meet these other two characters, they do not seem like the selfish, insensitive monsters the brothers apparently describe.

Because, as one of the brothers says at the conclusion of the story, basically, all we see is just family shit.

Australian cinema to discover and re-evaluate

Besides being a leading character in Brothers Nest, Clayton Jacobson is also the director of this splendid little 2018 movie.

I would frame this comedy in the strange genre of sinisterly funny drama, although actually, looking at what happens, there is nothing to laugh about.

Brotherly love soon becomes a dead-end escalation of despair, especially when the father character, excellently (and briefly) played by Kym Gyngell, comes into the stage.

That’s when we realize something about this family beyond what the siblings told us, such as the drama of the natural father’s suicide they both never got over.

Even more terrifying is the mother’s entrance, a glacial Lynette Curran, who definitively brings all the protagonists to face their real nature and obsession.

This dying, limp woman proves she is anything but weak and helpless, though she definitely chooses the worst time to walk through her home’s front door.

Shane Jacobson, the other cast brother, performs even better in a role hanging between weakness/stupidity and revenge/determination wonderfully until the end.

It is precisely his indecision that keeps up the tension from the earliest moments, as we understand immediately he will have something to protest when the crucial killing moment comes.

Finally, albeit in a brief appearance in the last few minutes, I want to mention the always beautiful and talented Sarah Snook, an excellent actress who was the protagonist in the gorgeous Predestination I recommended some time ago.

It is up to her to bring down the curtain on this tragic family comedy as the black screen of the ending credits arrives on the wonderful song Prison Bound by Richard Pleasance and Jo Jo Rainwater.

I admit to having accidentally discovered this movie while researching to write my article on The Nest.

However, I am so glad it came across one way in the other, just as I hope you also will give this little Australian gem a fair chance.