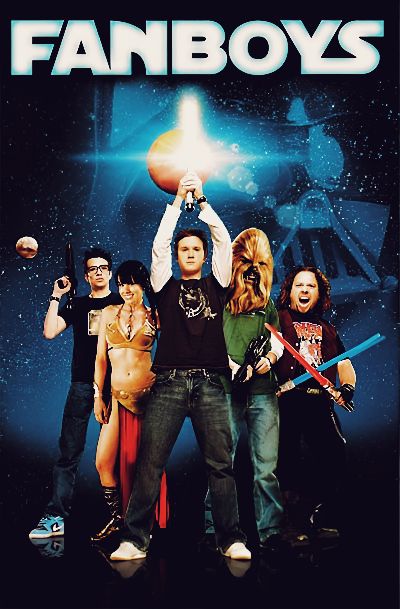 Whether or not you are among Star Wars fanboys like the protagonists of this 2009 movie, you certainly cannot deny its importance in cinematic science fiction.

This story takes place in 1998, when the first episode of the new trilogy, The Phantom Menace, is six months away.

Lovers of this famous saga quivering with impatience to see this movie, such as a group of friends once going to high school together.

When they meet at a party, one proposes traveling to California and breaking into George Lucas‘ home, the famous Skywalker Ranch.

Once inside, they will try to steal a copy of the upcoming movie to be the first to preview it and witness whether The Force is still powerful in their favorite story.

Everyone eagerly accepts, except for one who is at a critical juncture in his job at his father’s car dealership.

But the others inform him that his oldest and dearest friend does not have long to live, so he agrees to accomplish this last quest together.

The first step is reaching a chat friend of one of them to finally meet her in person and obtain the map with the Skywalker Ranch details.

It would seem an easy trip, at least at first, except that the group gets arrested almost immediately when they flee in front of a police car.

At that point, a close friend and Star Wars fanatic girl comes to rescue them by paying their bail.

The girl then decides to follow them to the end to protect them from their naive, childish nature and habit of always getting into trouble.

Unfortunately, trouble will still come along the way, but at least these friends’ relationships return as solid as in their school days.

A long time ago, on a highway far, far away…

Fanboys is a movie coming to theaters in 2009 after running through several directors’ hands, ending up being directed by Kyle Newman.

Not surprisingly, the same year, they released a version adding numerous hilarious Deleted Scenes, attesting to this production’s many problems.

Nevertheless, the final result is an exhilarating journey into the teenage geek world, unfailing to all Star Wars cult worshippers.

The plot places as protagonists an exciting group of no-longer-young friends, now entering the adult world yet unwilling to leave behind their childish and playful egos.

Indeed, despite 26 years since Return of the Jedi in this movie, these friends are still left with that period’s mindset, showing no hint of wanting to grow up.

Is this fair or unfair?

Of course, we all have to give something up when the daily grind of the work pace begins or starting our families.

Star Wars still brings together millions of fanboys worldwide with countless media, from movies to television series, or even video games such as the outstanding Jedi Fallen Order.

It is easy to see how everyone can find something to love in this saga, from the magnificent starship duels to space travel up to the awesome magical warriors loyal to the light or the dark side as the Jedi or the Sith.

Over the years, this franchise has lost whatever b-movie feel it had initially, imprisoning behind billion-dollar budgets the fantasy that made the first trilogy so magnificent.

Yet even as we complain, we still fill theaters to see it every time, so George Lucas‘s magic recipe still works, and you can be sure they will keep serving it for long years.

So don’t worry since we can continue traveling to these galaxies far, far away… many, many other times.

So many stars in this movie!

The most important characters among all protagonists are obviously Sam Huntington and Chris Marquette, respectively, the boy who has grown into a working man and the dreamer on the last journey of his life.

However, I loved the other friends’ craziness more, such as the irrepressible Dan Fogler, who dominates every scene, and the more shy but equally amusing Jay Baruchel.

The group becomes perfect when we add the sexy, aggressive Kristen Bell, unforgettable, especially after we see her in the ending with Princess Leia‘s famous gold bikini.

We could not miss the cameos of historical Star Wars heroes such as Billy Dee Williams and Carrie Fisher, in brief moments but with famous iconic quotes from the saga.

Although the legendary Mark Hamill and Harrison Ford are absent, at least we have their direct competitor William Shatner in an equally brief but essential role to enter the Skywalker Ranch.

Not coincidentally, we continuously find the rivalry with the Star Trek sci-fi saga fanboys throughout the movie, culminating in a demented all-out showdown near the end.

We then appreciate other minor roles by famous directors and comic actors Kevin Smith and Seth Rogen, although the best cameo award goes to the terrific Danny Trejo.

The tough action actor from Machete here plays a mechanic/guru who drugs the main characters in a meadow, coming to hallucinations in imitation of the famous intro moving text against the backdrop of the stars.

Fanboys, unfortunately, performed poorly at the box office in 2009, yet the movie gained popularity in the following years, creating a small but loyal fan base.

As far as I am concerned, it is a story of friendship and fun that has so much love for Star Wars to be even better than most recent Star Wars movies.

As I said earlier, it probably happens because it picks up that mood of the trashy but lovely B-Movies that George Lucas and every other director could no longer recreate afterward.

The Innocents – Terror Can Come From A...

Laura – The Most Beautiful Among...