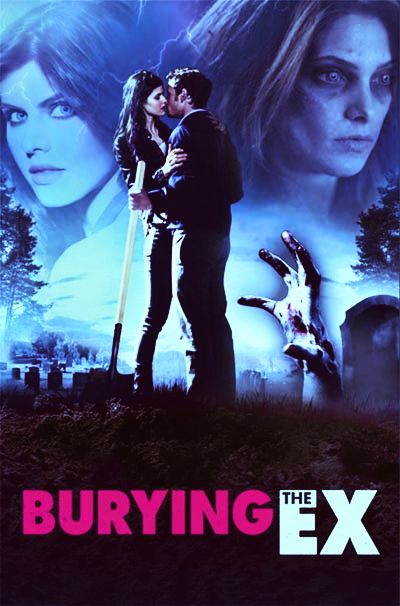 When love becomes merely a desire to possess, it becomes a curse, as it does to the unlucky players in Burying the Ex, Joe Dante‘s welcome comeback with a horror movie in 2014.

The story begins with a seemingly happy young couple, although his half-brother occasionally exploits their home for his sexual rampages.

As the minutes go by, however, we discover how this boy and this girl, despite their affection and mutual desire, are as far apart and incompatible as temperament and personal interests.

He is a humble horror-loving clerk working in a store filled with merchandise and novelty curiosities of this cinematic genre.

Instead, she is an aggressive and unyielding ecological vegan, engaged 24/7 in a blog about this topic.

Although some of her opinions are fair, the total intolerance for different ideas does not allow them to have friends outside of the relationship.

After another argument over stupid ice cream, the boyfriend can’t take it anymore and decides to break up, except a truck drives over her just as he is about to tell her.

So he spends the following days stuck in the house, feeling guilty about her death. However, the beautiful girl from the ice cream store starts courting him, and he begins to think about a new and different life.

Unfortunately, because of an oath they made as a joke in front of a Satan statue, the ex-girlfriend rises from the grave, returning home.

As a zombie, she is even more possessive than before, willing to continue her romance even though she is only a rotting corpse at that point.

When she finally discovers his affair with the beautiful ice cream girl, jealousy becomes a raging and deadly obsession, turning her into a hellish being.

An amusing fair for horror enthusiasts

I will always wonder why a director as talented as Joe Dante could only make a handful of movies in the last 20 years.

What goes through the minds of the producers?

I can understand that maybe there were arguments we don’t possibly know, and they don’t want to give him multibillion-dollar budgets.

However, getting so far as leaving him almost completely unemployed isn’t that excessive?

Fortunately, our beloved Gremlins creator (whom I recently recommended for a fun 1980s Christmas) hasn’t lost his brilliant creativity or even his skill behind the camera.

Indeed, a movie like Burying the Ex in 2014 feels watching horror with the carefree spirit and enjoyment proper to the 1980s.

The characters and story don’t even pretend for a minute to be serious, entertaining genre lovers with an endless series of quotes and references.

To my Italian delight, there are many scenes from the great Italian productions of that era.

Above all, I fondly remember some movies by the immortal Mario Bava, such as Planet Of The Vampires or The Whip and the Flesh, a little-known S&M horror starring an extraordinary young Christopher Lee.

Therefore, Joe Dante‘s movie is a means of talking about the kind of cinema he grew up with and loves from the bottom of his heart.

There is no attempt here to frighten the viewer in any way with blood and murder, aiming only to amuse with pleasant lightness like a breeze of cool air on a scorching hot day.

For example, there are constant sex jokes that become hilarious when the hot girl returns as a rotting, unstoppable zombie.

The story’s pace is always just right, flowing easily for virtually any audience, who will not even notice the time going by in the meantime.

Never piss off your zombie girlfriend

Basically, Burying the Ex is a tale of a love and jealousy triangle embedded in a hilarious 2014 horror movie.

Anton Yelchin is the pinnacle of this bizarre three-way relationship in a role practically a young version of the director himself.

A humble, downtrodden worker in a store where he cannot do (even say) what he wants, as well as having a mother-like girlfriend to dictate how he should live, dress, or even eat.

In this role, Ashley Greene starts out as a bombshell we would all want in our bed at first glance, yet throw out of the house after ten minutes of her irritating and tedious speeches.

It is evident how immensely the actress enjoys playing the moody lunatic, later acting with solar energy, even the part in which she is a zombie literally falling apart.

On the other side of this affair comes Alexandra Daddario, practically a female version of the protagonist working in an ice cream shop with the ironic name of I Scream.

Unfortunately, this talented and beautiful actress never gets a chance to star, except perhaps in the intriguing Lost Girls and Love Hotels, a bizarre romance movie that is sadly unknown to the general public.

Finally, outside this triangle is the hilarious Oliver Cooper as the (not very clear) brother/stepbrother and inexhaustible womanizer and partier.

His role is the most amusing of the whole cast, offering a solid fun alternative to the romance/comedy moments of the other main characters.

Plus, it is on him that finally closes the movie, turning into a zombie much friendlier than the devilish girlfriend.

I do not understand how this movie can be disliked, even though I have read opinions and reviews that even hope this is the last time they see anything by Joe Dante.

Instead, I prefer to admire the work of a great director still with the grit of yesteryear, in a clever parody of the typical insanely jealous ex-boy/girlfriend everyone encounters at some point in life.