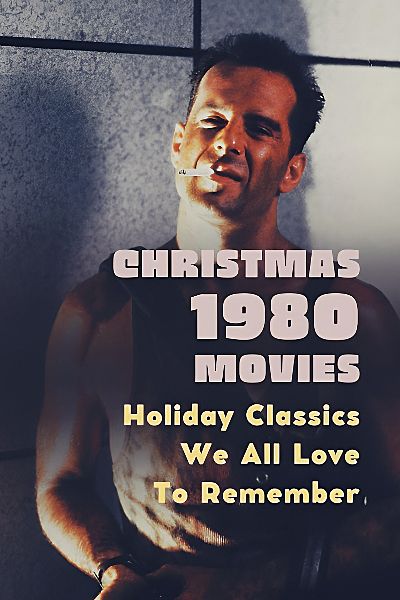 Maybe our tree lights are lower this Christmas because of the current energy crisis, yet there’s nothing to stop us from going back to the more cheerful 1980 by watching some yummy movies with the family.

Of course, keeping within the spirit of that era, don’t expect little stories with Santa Claus coming down the chimney on Christmas Eve.

I’m being clever today since the 80s movies I recommend are widely known and popular, although some may not remember that they are set on Christmas days.

But we do, after all, like to talk about the things we know best and love most, reiterating our passion by repeating the same compliments again and again as if it were the first time.

Let’s start with a milestone of 80s action movies, which not surprisingly begins in a Christmas tree store.

However, the place is actually a drug dealers’ nest, cheerfully kicked around by the hallucinated narcotics cop Mel Gibson before the actor actually became too crazy to play this role or even Mad Max.

Because of his unpredictable behavior, the bosses pair him with the quiet and peaceful Danny Glover, an elderly detective approaching retirement.

In a hilarious escalation of twists and turns, cinema’s most legendary action couple will come to stand against an international trafficking cartel consisting of a handful of exalted former U.S. soldiers.

At the helm of this unforgettable buddy movie, we have the incredible Richard Donner, fresh from the worldwide success of The Goonies, Ladyhawke, or Superman with the sadly departed Christopher Reeve and Marlon Brando.

The director knows well when to press the accelerator on the humor or the spectacular fights and shootouts, equally handling the personal drama of a fundamentally insane figure.

From the very beginning, Mel Gibson‘s character grieves over his wife’s death, caressing the idea of suicide every day by putting a gun in his mouth.

Paradoxically, this is precisely what makes the mixture even funnier, of course, placing this kamikaze cop side by side with the wise old black cop now on the tail end of his career.

This quirky Christmas movie generated no less than three sequels from the 1980s to the present, as well as a TV series with its own circle of fans, although it could have been avoided.

Because, just as Danny Glover‘s character always says, maybe we’re too old for this shit.

The next Christmas movie is even more famous than its predecessor, having been a real cinematic earthquake in the 1980s generating countless attempts at imitation.

We are talking, of course, about the beginning of a saga launching Bruce Willis into the Hollywood star Olympus as the hero-for-a-night John McClane.

A hero without superpowers or a genesis from a sad past, being simply a New York cop that flies to Los Angeles only to see his children and wife from whom he is divorcing.

However, their failing marriage becomes the least of their problems when a terrorist commando invades the skyscraper where they are celebrating Christmas Eve.

His wife and her full colleagues become hostages to deal with on their own terms, while McClane takes refuge on the upper floors, seeking help from fellow cops.

He soon realizes, however, that he will have to fend for himself against these supposed terrorists who are really just robbers looking for the heist of a lifetime.

Die Hard comes at the golden moment of John McTiernan‘s career, straddling two other blockbusters such as Predator and The Hunt for Red October.

Personally it is the one I am most fond of of these big three 80s movies, being the first VHS I bought in my life just under the Christmas season.

Even this classic had no fewer than four sequels, of which only the third chapter still lives up to the hype, while the second remains watchable.

A perfect holiday movie that concludes with the epic line: If this is their idea of Christmas, I gotta be here for New Year’s!

Indeed, a father brings home an extraordinary pet to make it up to his son for being away for work ( at least, looking for work) all the time.

The boy and his friends immediately love this fluffy, furry doll, in whose eyes there is very human intelligence and sensitivity.

However, the mysterious Oriental shopkeeper who sold it warns them never to get it wet or feed it after midnight under any circumstances.

Of course, the careless boy violates these rules, and some little furballs are born and become exact copies of his pet.

Yet, the resemblance is only superficial since the copies soon mutate into evil, messy, and even murderous little monsters.

After his excellent beginnings with Piraña and The Howling, Joe Dante veers into Christmas-set children’s cinema, yet without abandoning any horror streak in his filmmaking.

Gremlins is a movie suitable for children and adults alike, which followed the flop of the crazy and surreal Gremlins 2 that unfortunately marked the end of big budgets for the director.

A real shame for a saga whose rumors have been circulating for years that Chris Columbus is eager to make a third chapter avoiding the intrusive use of unnecessary digital special effects.

These little monsters work well as they are, representing the spasmodic pursuit of pleasure at any cost (they drink, smoke, mess around, and nothing else in life), even going so far as to kill those who try to stop them.

Like Evil Dead, we are at the perfect comedy and horror sum, in a perfectly balanced recipe where one never surpasses or overshadows the other.

Surely everyone knows this 1980s movie, even those who never saw it, yet how many remember it was set during the Christmas holidays?

Indeed, while everyone is decorating the tree and preparing dinner for Christmas Eve, this quiet soldier arrives in town looking for his old comrade-in-arms.

Unfortunately, his friend is dead, and he is getting ready to leave, but first, he wants to eat something.

However, the local sheriff disagrees, annoyed by his filthy hobo appearance, and rudely chases him out of town.

The boy reacts to the abuse and ends up in jail, where other police officers mistreat him, setting off an uncontrollable rampage.

Escaping from the police station and sheltering in the woods, the ex-soldier wages a no-holds-barred war against the entire society guilty of forgetting him after all his sacrifices at the battlefront.

Rambo marks the consecration but also the end of Sylvester Stallone, at that time, already in the third chapter of the Rocky saga, which sanctions the only two roles he will play from here on in his career: the sports and the action hero.

An escalation that we will see more of precisely in this character, who goes from a rebellion icon against the police and the establishment to a man-slaughtering machine exporting American-style democracy in later movies.

Observe how in the first chapter of this saga, Rambo kills no one: except the policeman at whom he throws a rock by dropping him from a helicopter, more in self-defense than out of true murderous intent.

The character regained some humanity by becoming older and more jaded in the 2008 sequel, collapsing into the banality of the macho avenging Mexican killer with 2019’s Last Blood.

But that’s okay, dear old Sly; we know you at least try, and we love you anyway.

Since I always have to be unique, as my last Christmas movie, I want to talk about an 80s Italian gem unknown to probably 99% of movie lovers.

Again we are on Christmas Eve when three old friends reunite after a long time for a risky Poker game.

Indeed, at the fourth place of the table sits a wealthy lawyer whose money they hope to squeeze out as much as possible.

Realistically, none of them has any illusions of having the skill or finances to counter this opponent, so they invite another friend with whom they had violently quarreled many years earlier.

Initially hesitant, the latter accepts the challenge hoping to bail himself out of all his financial problems in one shot.

The game gets off to a good start, with the lawyer immediately beginning to lose. However, the constant tensions and old grudges between the friends will inevitably lead to a tragic-comic ending.

Without dragging it out too long, this all-Italian Christmas evening, along with the famous Texas Holdem with James Bond in 2006’s Casino Royale, are my favorite poker games in the entire history of cinema.

There is nothing sanctified about this eve of the sacred holiday, no mercy between friends and enemies in this psychological battle where winning is imperative over anything else.

The duel to the last card and look between the star performers of the evening, Diego Abatantuono and Carlo Delle Piane, the latter especially in top form in the role of this impenetrable man, is simply phenomenal.

Equally important are the other characters, Gianni Cavina, Alessandro Haber, and George Eastman, each bringing his own contribution of drama and comedy to an absolutely perfect story.

I do not want to tell you more except recommending passionately to find this movie and enjoy it.

I hope you will love it as I have loved these milestones of 1980s cinema, and if you would like to recommend some of them to me, I await suggestions in the comments.

Tough Guys Movies – No One Is Scary...