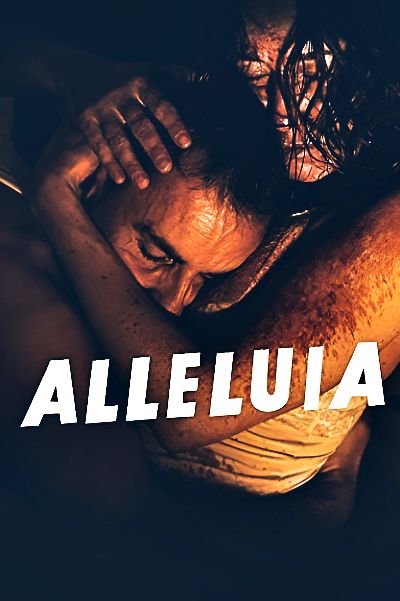 We cannot know how far we would go out of love for someone before being already beyond the point of no return, as happens to the protagonists of this hallucinating 2014 movie, Alleluia.

Everything starts with a simple blind date, where his manners and mysterious charisma immediately enchant her, a single mother with a disastrous marriage behind her.

The next day, he disappears after asking her for some money for an urgent business he claims to have pending.

After that one night of passion, she falls into depression, returning to her unsatisfying life and the dull job with corpses in a hospital morgue.

However, she decides not to give up, searching at various clubs in the city until she finds him intent on courting other girls from whom he could squeeze money, just as he had done with her.

Initially, she confronts the man in anger, insulting and attacking him, yet he manages to soften her up, and they make love together again.

By now, it is impossible to break off this relationship that has rekindled her life, so she tells him that he can safely continue to con other women as long as he stays with her.

Intrigued by this strange proposal, he agrees and involves her in the criminal seduction routine that, as he says, is something he has been doing since his childhood.

Apparently, she helps him and even enjoys what he does, although when she spots him making love to another woman, she has a murderous rapture and brutally kills her.

Initially shocked by this sudden outburst of violence, the man soon becomes accustomed to this new kind of even more perverse routine.

Thus, from this strange romance comes a serial killer duo who solves their problems and finds happiness only in other people’s blood.

The unmanageable madness of love

Although we wish people as in this movie did not exist, 2014’s Alleluia was inspired by the feats of two vicious serial killers from the 1940s, Raymond Fernandez and Martha Beck.

These lovers and killers lured their many victims through sentimental ads, posing as brother and sister looking for opportunity, finally ending up sentenced to death in the early 1950s.

Building on this foundation, Fabrice du Welz constructs an atypical horror romance without bothering to sugarcoat the story’s violence for the viewer, shoving reality in our faces like a bucket of ice water.

These modern-day Bonnie and Clyde, while clearly psychopaths, are depicted in all their human weakness and loneliness.

She is a woman unable to overcome a miserably failed marriage, smoldering under the ashes the flames of uncontrollable rage.

On the other hand, he is a charming womanizer with an insane (perhaps even incestuous) childhood with a mother from whom he learned the subtle art of pleasing and seducing women.

These two worlds merge into a single universe of madness, murder, and wild sex; alternating love and hate in a relationship that always seems on the verge of breaking tragically.

However, the director skillfully makes the most of the low budget, alternating different styles of direction, photography, and lighting in a merry-go-round of realism and surrealism bordering between dream and horrific reality.

Therefore, this movie’s shape is as shifting as these characters’ moods, rising and falling in tension until an epilogue which, despite being cruel, is almost as sweet as a musical.

I certainly don’t expect everyone to like this movie; it will shock some people’s sensibilities, although they will also admit that it differs wildly from the usual serial killer thrillers we are used to.

Acting and catharsis at the highest level

Besides the excellent and original directing and screenplay work, Fabrice du Welz wisely chooses the two leads for this bizarre love story.

Lola Dueñas delivers a performance of total catharsis, a fearful rainbow of mental and physical emotions; we see changes on her face and body.

Depending on the situation, sometimes she appears to be a beautiful and happy woman. Yet, within seconds her eyes become distant and fierce like a monster emerging from the darkness of hell.

However, from the first seconds in the morgue, we feel something strange about her in how she stares macabrely at a corpse lying on her table.

Laurent Lucas is equally good in this women’s charmer role, who, however, is not really dangerous until he meets the unsuspecting soul mate.

At that point, we see how this man completely abandons his last remnants of conscience and morality, releasing that dark inner side he did not yet know.

As mentioned, the relationship between these two characters is absolutely dysfunctional, going from total complicity and romantic intimacy to the impossibility of communication and understanding.

Among all their victims, I want to name Héléna Noguerra, a beautiful young widow who creates the first real problem in the murderous routine of these serial killers.

Indeed, the protagonist revises herself into this single mother, suffering from how she sometimes scolds her daughter for no reason.

I want to keep the ending, although I have already mentioned that it is a fascinating and scary sequence at the same time, edited slowly to the beat of wonderful music like a hallucinated music clip.

Alleluia is a catalog of mediocre and depressing human situations, split into chapters with women’s names making it a 2014 novel movie to flip through scene after scene.

It is definitely a story not for everyone because it needs the viewer’s sense of the grotesque and a hint of perversion to truly appreciate it.

Tracks – A Lonely Journey Through...