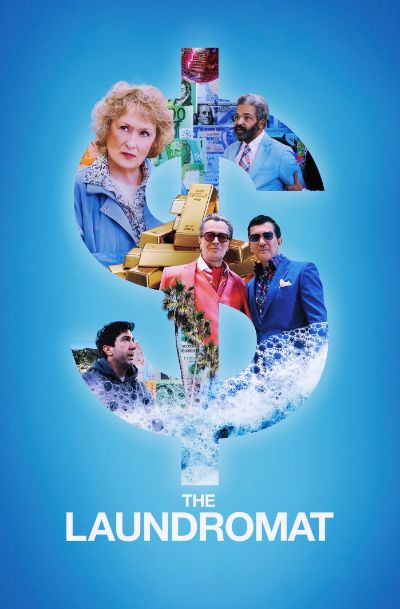 Money makes the world go round, needless to tease us about that, and this 2019 movie, The Laundromat, will not try to change our minds.

Where does come from the immense capital with which banks, corporations, and even entire cities or nations merge?

Inspired by a series of actual scandals, Steven Soderbergh crafts a financial fable perpetually hovering between comedy and tragedy.

It all begins in New York after a dramatic accident in Lake George, where many tourists drown when a ferry capsizes.

Lawyers promise their loved ones a million-dollar settlement. Yet, everything falls apart when it turns out the insurance company has been bought out by another corporation based in the Caribbean.

Unfortunately, this company is under investigation by the government for fraud, so none of the victim’s relatives or friends will ever see a penny.

However, an elderly widow has no intention of giving up and wants to find out who is behind these scams.

Similarly, we see other random incidents around the world, such as a British banker killed by the wife of a corrupt Chinese politician before a resounding arrest in front of the party.

We also follow the young daughter of a wealthy African American who discovers how the companies her father owned, on paper multimillion dollars, are worth barely a hundred dollars.

From these tiny stones, indeed, comes a landslide that will eventually reach the creators of these shell companies, a German banker and a South American lawyer.

Along the trail of this destruction, all their lies end, buried by vales of false documents and empty financial boxes, one inside the other.

However, after these awful truths come out of the closet, we discover with discouragement that these scammers beyond redemption will get away with only a few months in jail.

The amusing tragedy of life

As I mentioned, The Laundromat is a 2019 Steven Soderbergh movie somewhere between comedy and tragedy.

Indeed, the director deals with these delicate topics by presenting various situations with humor and intelligence, making us smile bitterly rather than laugh openly.

Others might approach these scandals with a legal thriller; however, tackling these financial sharks head-on less severely is more effective.

Alongside the financial wizardry, of course, revolves the political world, which out of convenience, often aids the fraudsters with contradictory and ineffective laws.

As always, the director’s style is graceful and sophisticated, rhythmically paced by the peaceful flow of impeccable editing that holds the many situations and characters together.

This tragicomic epic’s focus is the Panama law firm behind all these companies, run by the cunning and greedy Gary Oldman and Antonio Banderas.

Indeed, this firm is a back-and-forth of employees seemingly oblivious to their work, even signing documents placing them in charge of bogus companies to guard their clients’ money.

Such is the real end goal of these conspiracies, hiding huge sums from the fiscal authorities to avoid paying taxes or laundering it from illicit activities such as drug and weapons trafficking.

As always happens after big scams, honest citizens are paying the price with no fault except being part of a system rotten to the core.

I admit to not knowing the extent of these scandals and arrests in the financial world, yet it is always helpful to refresh the memory of how this business actually works.

It is a world divided into thousands of small firms in nations like the Caribbean Islands. Even then, citizens live in poverty without knowing the billions of dollars traveling over their heads.

So many faces and so many stories behind so much money

Besides the excellent direction by Steven Soderbergh, we also have the solid screenplay written by Scott Z. Burns, already the author behind his other movies such as The Informant, Contagion, and Side Effects.

The story flows smoothly on the faces of the great cast players, with inspiring performances that frequently break through the fourth wall by speaking directly to us viewers.

In this vein, we must name Meryl Streep in the role of an honest, straightforward woman who just wants the truth behind the money-spinning about her husband’s death.

As we can see everywhere around, a mother and wife for an actress brings drama to the screen with talent without excessive tears or exaggerated acting.

After her, I would put the pair of financial villains Gary Oldman and Antonio Banderas, working hand in hand with great chemistry and experience.

We often see them in scenes hanging above reality to understand better some economic gears, practically fictional tutorials on the recycling business, and dummy corporations.

These moments are the most hilarious in the movie, such as the intro, where they explain how money is born and runs.

Likewise, many other characters revolve in the numerous scenes throughout the world of this story, yet I like to mention the two ferrymen who survive the initial massacre.

How can you not love former Terminator Robert Patrick, along with the star of the TV show Friends, David Schwimmer?

To save a few bucks on an insurance policy, these two men get into a sea (actually a lake) of trouble from which the big mess will begin.

The Laundromat is a movie that, in 2019, shows us how the gap between the few multimillionaires and ordinary people today is even broader than ever and does not seem willing to diminish.

Will what Meryl Streep prays for toward the end be true, that eventually, the lowly and the poor will inherit the earth? I would love to believe that; let me know what you think.

Reign Of Assassins – Love And Revenge Into...