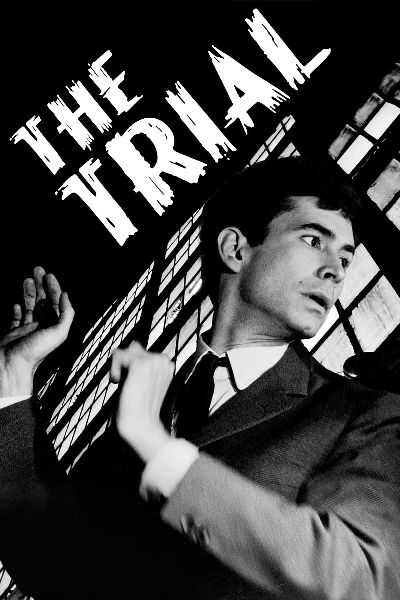 Sometimes I doubt whether the movies I recommend are actually good or only appeal to me, but today I’m playing it safe by suggesting 1962’s The Trial.

The great actor, fresh from his memorable performance in Alfred Hitchcock‘s Psycho, plays here Josef K, an ordinary man with nothing unique or different from everyone else.

Yet one morning, he finds a policeman knocking on his door as he wakes up, beginning to make strange allusions that he does not understand.

Increasingly confused by the nonsensical questions, Josef discovers, stunned he is under arrest and must appear at the supreme court for the first hearing of his trial.

No one bothers to explain what is going on, and indeed the police do not even tell him what charges are being brought against him.

Back at work, he finds his boss and colleagues treating him as if he were already guilty, already resigned to his inevitable conviction.

The evening should be a quiet participation in a theatrical spectacle, but the policeman suddenly reappears, dragging him backstage into the courtroom where everyone is already waiting for him.

Once again, no one tells him what the charges are; instead, the judge and the audience mock his attempts to defend himself and ask for explanations.

Increasingly upset by the rushing course of events, he consults an experienced lawyer, who, however, spends all his time at home in his bed.

The lawyer stalls without actually doing anything, seeming indeed to enjoy his power over his clients’ despair.

So Josef finally resolves to defend himself in a final tragic act that will bring to light the madness of an entire system against him.

The form and style of injustice

Orson Welles certainly needs no introduction, being one of cinematic history’s most adored, bizarre, and talented figures.

Just as the story begins by recounting the anonymous life of an ordinary man, the pace becomes increasingly restless as the insanity rages against the protagonist.

Within this absurd world, we move as in a dark tunnel inside a labyrinth with no way out, crowded with characters resembling the masks of a perverse Carnival.

In this labyrinth, we get lost in fascination and terror as the beautiful scenery flows by each other without any logical consequence.

Indeed, the glamour of the frames’ geometry and environments combines with the terror of seeing the sick mirror of our society again in Josef K’s tragedy.

It has happened to all of us at one time or another to end up in the black hole of bureaucracy, a world of incomprehensible rules seemingly constructed only to confuse and make citizens surrender to its inextricable complexity.

As a matter of fact, the plot becomes so surreal at one point that we almost wonder whether we are witnessing the mere delirium of a man gone mad.

Alongside the dark and pessimistic description of institutions, there is then a strange sexual obsession of the female characters toward the protagonist, instead mocked and abused by all the men.

There are no guarantees in this world of justice choked by the stubborn denial of all rights, as we have often witnessed the government violating the citizens’ privacy in the name of some supposedly higher ideal.

Orson Welles succeeds in bringing on screen a book that is hardly interpretable, deliberately ambiguous, and devoid of narrative references without easy cinematic tricks.

The faces of expressionist cinema

Putting aside any analysis of each shot’s expressionistic baroque, worthy of a painting to hang in a museum, who plays this movie?

Although there is a busy bustle of numerous characters who arrive, disappear and reappear again and again, I choose to talk about only four of them.

Undoubtedly we begin with the protagonist, who, as mentioned, is the superb Anthony Perkins in the second-best performance of his career after Psycho.

The actor gives life to a different Josef K. from the book, more neurotic and unlikeable, whom we do not always feel empathy toward, despite his situation.

This character is virtually omnipresent in every scene from beginning to end, with the camera following him on this hellish journey into the depths of bureaucracy.

We must also mention Orson Welles as the lawyer Hastler, a smiling law executioner lying in his bed motionless as Star Wars Jabba the Hutt.

Just like the famous trafficking monster, he also has a princess, the beautiful nurse Romy Schneider, who we understand he has a relationship with far beyond medical care.

Indeed, this woman has an irresistible attraction to defendants seeking help for their trials, such as the longtime client played by Akim Tamiroff.

The latter is a pathetic figure living in a tiny room at the lawyer’s office, hoping he will sooner or later grant the privilege of reviewing their case.

However, he is actually nothing more than the ghost of the protagonist’s future Christmas or what he would become if he fell into the hands of this profiteer who enjoys humiliating others.

Of course, not only are these the characters, there are many others, yet these are the ones around which revolve the most critical points for understanding this story.

If you have never seen this distant 1962 movie, hurry to enjoy this indescribable black-and-white experience because there is no such thing as The Trial.

Stalker – The Best Future Movie Comes From The Past

Jamaica Inn – A Fascinating Story In The...