Stalker – The Best Future Movie Comes From The Past 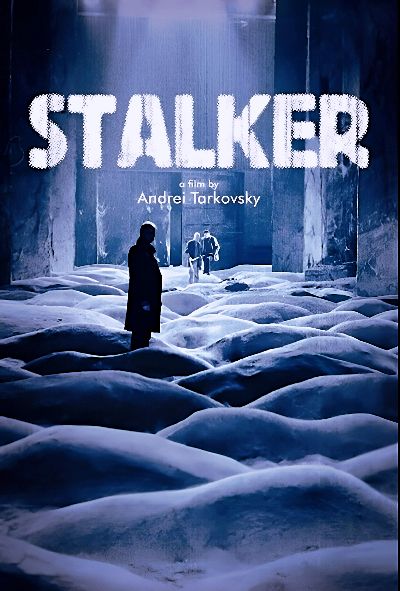 There is a kind of science fiction that does not just consist of special effects or adventurous pacing but instead aims to seep into your brain and soul, as Stalker, a distant 1979 movie, tries to do.

It is up to you to get into the story and let it get inside you, just as there should be no shame or arrogance in admitting if the movie bores you.

There are no definite reference points, and we know neither where we are nor what year it is exactly.

We do know in this poor and forsaken environment, heavily under the control of the army and the police, there is a no-go zone for all ordinary citizens.

For some unknowable event within this zone, different rules apply from the rest of the world; walking forward may mean going backward, and reality itself is an elusive and unreliable concept.

The story begins with three men walking past military checkpoints into this no man’s land of rotting buildings and pure wilderness.

One of them is a writer seeking inspiration, another a seemingly harmless scientist yet with a hazardous plan in mind, while the last is precisely a Stalker.

Stalkers are the few people who can guide others through this mysterious zone, one of the few who can foresee the deadly traps and ever-changing paths of this uncontrollable world.

However, why would anyone want to go to such a place?

That is quite simple: hidden in one of the many buildings half-destroyed by years of weathering, there is a secret room where one’s every wish can be fulfilled.

However, this room does not work like Aladdin’s Lamp and does not respond to your requests; instead, it reads the most buried inner part of your soul, transforming the most unmentionable dreams into reality.

So beautiful at being boring?

Around the Internet, I read many bitter debates about 1979’s Stalker, with violent arguments between those considering it an absolute masterpiece and others an incredibly dull movie.

I think both statements are actually factual: Stalker is a magical fragment of the kind of cinema which provides no answers and indeed leaves you, in the end, with more questions than when you first started watching it.

Equally valid for those looking for simple entertainment to pass the time with their brains off, it is definitely the wrong choice you can make.

Nothing is wrong with admitting you want an explosive and spectacular kind of cinema, such as a romantic comedy or horror thriller, more agreeable to your inclinations.

For example, I am only sometimes in the proper mood to watch it.

It doesn’t make Stalker a presumptuous failure suitable for pseudo-intellectuals (as I’ve read around); instead, it simply draws a line between those who enjoy accessible cinema and others striving for a more challenging one.

The most hilarious thing I find with the most arrogant ignoramuses who criticize this movie is that if they had stuck around for an extra half hour to watch it, they would have discovered these three characters are precisely about them.

There is no strong hero as well as weak or villain in this story, yet each has his moment where he shines above the others, likewise other times where he is a miserable, pathetic coward.

Those involved in this magical journey are just human beings confronted with physical, moral, and spiritual limitations.

In this context, culture and wisdom become stupid ignorance, and courage is a mask for our most profound, unmentionable, selfish narcissism.

If this movie can ponder every little choice without even knowing us, how can it be worth nothing?

The sci-fi names of the past, now lost?

I realized only now that I have yet to name this unique and inimitable masterpiece’s director: Andrei Tarkovsky.

Unfortunately, this name may mean nothing for younger audiences, yet we are talking about a universal-level director such as Stanley Kubrick, Akira Kurosawa, or Orson Welles.

By universal level, I mean that he can speak to any culture and generation, assuming, of course, that you give him a chance to do so.

If you are part of the audience who doesn’t know him, even less will you know the various actors in this movie.

In the role of the Stalker, we have Aleksandr Kajdanovsky, a man unable to live with his family, whom he wants to abandon to always go to the Zone where he feels valuable and necessary.

Anatolij Solonicyn, instead, is the arrogant and presumptuous Writer, a man consumed by experience and convinced the world could no longer surprise him in any way.

What I love most are the hilarious and philosophical verbal duels between him and the Professor, played by the wiser and quieter Mykola Hryn’ko.

However, being wise does not mean being good; it is no coincidence that this mad scientist carried around a 20-kiloton bomb to destroy the wishing room.

Finally, we mention the sweet and sad Alisa Frejndlich, wife of the Stalker, leading an existence of unhappiness with a daughter condemned from birth to a deformed life.

It is precisely the daughter, played by the perfectly catatonic face of Nataša Abramova, who concludes the story in a final emblematic sequence of telekinetic power.

I doubt you can understand a movie like Stalker on the first try; for example, I have seen it so much from 1979 to the present, and each time I discover something new or experience a different emotion in each scene.

So, we may not yet be able to handle this story’s visual and narrative power, just as the protagonists will never be able to exploit the incredible power hidden in the Zone.

Movies Around The World – Stories For 12 Different Countries

Paterson – The Ordinary Life Of...