The Wife – The Suffering Shadow Of A Successful Man 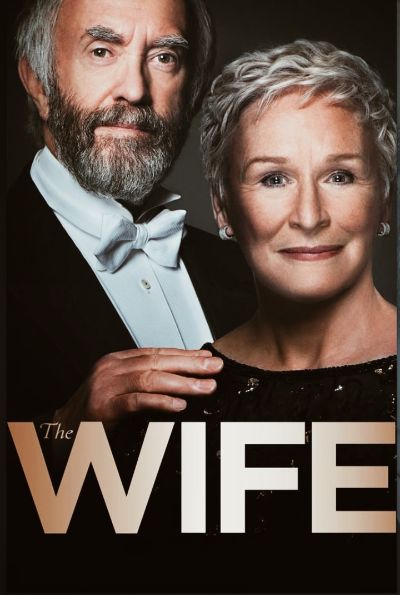 Behind a successful man stands a woman, so they say, and it is perfectly appropriate for the movie we are talking about today, 2017’s The Wife.

At first glance, the married couple starring in this story would seem to be the portrait of happiness, living in luxury since the husband is a famous writer idolized worldwide.

Indeed, in the middle of the night, a phone call even arrives from Stockholm, announcing that he has just won the Nobel Prize in Literature.

However, on the plane that is taking them to Sweden to collect the award, they meet a journalist researching for years to produce a writer’s biography.

This seductive and aggressive fellow firmly believes that his career is a charade and, actually, the real genius in the family is his wife.

The woman firmly denies it; however, from that moment, we begin to relive her memories and early relationship with her husband.

He was an already married professor, and she was a brilliant student that fell in love causing a scandal and the following divorce and dismissal of the man.

The following years are very hard, getting by with difficulty while he tries to write a novel, and she works as a secretary in a publishing house.

We then discover the journalist’s accusations were true, and she is the one who breathes life into her husband’s dull fiction, rewriting every word in the first major best seller of his career.

The man shamelessly takes advantage of her talent, even cheating on her whenever the opportunity presents itself, while two children arrive in the marriage.

Once they arrive in Stockholm, just before the award ceremony, the woman realizes she can no longer carry on that way and confronts the husband in a final tragic quarrel with an unpredictable outcome.

Being false for convenient bliss

There may be many ways to describe a movie like 2017’s The Wife, yet I believe it is a simple story of abuse and exploitation.

Mind you; there is nothing violent about the husband’s behavior, played by Jonathan Pryce; on the contrary, the man cleverly exploits his wife’s weaknesses and devotion.

When he is still young (played by the convincing Harry Lloyd), he owns charisma and seems self-confident, but everything changes realizing his skills are not as great as he thought.

At that moment, we witness him becoming childish toward his young wife (the beautiful Annie Starke), and his attitude worsens as he realizes the woman possesses genuine talent.

Subsequently, we see fragments of the years between this episode and the crowning of this fake career with the Nobel Prize.

However, all that is missing we can deduce from the composed yet suffering lineaments of the magnificent Glenn Close, unquestionably the brightest star in this movie.

Every glance and word (spoken and unspoken) of hers open a crack in the frame of the apparent fairy-tale marriage, rekindling the burning flame in the buried ashes.

Indeed the woman sees herself and her frustrated husband in the complex character of her son, a moving and easily irritable Max Irons.

The boy wishes to write but believes he cannot live up to his father’s standards, constantly asking him for advice that he cannot give him since he is an even worse writer.

In the middle of all these characters stands the funny and annoying journalist Christian Slater, playing here the famous straw that breaks the camel’s back.

I would have given more space to his character, making him confront the hypocritical successful writer longer and even harder.

Still, the message of exploitation and psychological violence, despite this, comes through loud and clear.

Björn Runge brings Meg Wolitzer‘s novel The Wife from the pages to the screen in a 2017 movie about the tragedy of a marriage shamelessly narrated.

The man is as dominant as pathetic, while the woman is as brilliant as submissive in a humiliating no-win situation.

Even the son is a weak junkie who cannot impose his personality, while the daughter lives her life oblivious to her family’s real problems.

Indeed, it is precisely the moment when the granddaughter is born, delaying the inevitable tragedy, and buying time for a final confrontation that can no longer be avoided.

I want to emphasize more the performance of Jonathan Pryce, perhaps too quickly discussed earlier, perfectly playing the sick and parasitic half of this dysfunctional relationship.

The actor equals Glenn Close‘s stolid silence with his stubborn haughtiness, creating an argumentative cue in every dialogue because he cannot admit even to himself to be a man and a writer worth nothing.

However, the Nobel’s final humiliation is his condescending speech to his wife, toward whom he shows a loyalty as fake as his successful career.

The drama of this woman living in the shadows is an increasingly heavy burden crushing an artist’s personality who is denied what is rightfully hers.

How much can a person with so much talent endure before she explodes while the marriage implodes toward inevitable failure?

Building on the book’s excellent foundation, Jane Anderson adapts a screenplay compressing the highlights of a story of sharp feminism and modernity into just over an hour and a half.

A chronicle of everyday abuse in which we can all find something in our lives when we bow our heads and surrender to injustice.

What do you guys think? Is it right to nullify yourself for the supreme good of family peace? Let me know your opinion in the comments, although these questions are difficult to answer.

Movies Around The World – Stories For 12 Different Countries

White Oleander – When A Mother’s...