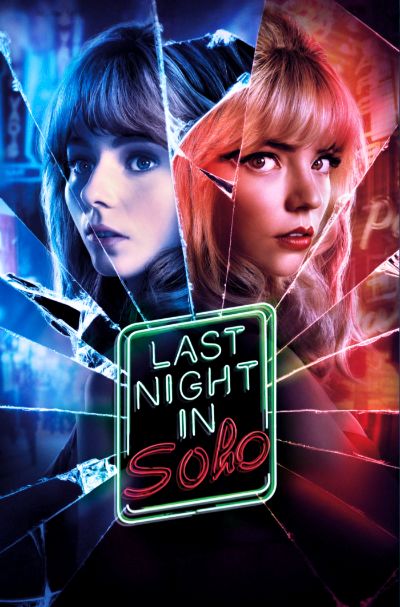 Every country girl dream of moving to the city; what if the dream becomes a nightmare, as in this 2021 movie, Last Night in Soho?

Indeed, it is precisely how the story begins, with a shy, fashion-loving teenager on her way to London hoping to become a professional fashion designer.

The college she is to attend offers many opportunities, and the teachers are inspiring toward the creativity and imagination of the students.

Later, however, she discovers that the dormitory is full of noisy and annoying classmates for her, who is used to the peaceful countryside, so she decides to find an apartment only for herself.

Unfortunately, the costs of the big city are beyond her means, so she turns to an old woman offering her a room on the upper floor of her house.

On the first night, an unexplained phenomenon happens as soon as she lies in bed. Suddenly she sees in the mirror a girl her own age who lived in the same place many years earlier.

This beautiful blonde had just arrived in town, exactly like her, dreaming of a career as a singer.

Unfortunately, as mentioned, her dream became a nightmare when a charming club owner offered to work in exchange for being gracious with his customers.

The occasional favor becomes a proper job from which she cannot break away, ending up as a prostitute for dozens of men.

Night after night, the fates of these two girls, divided by time, become closer and more indivisible.

Seeking information about the past, which keeps haunting her, she finds a former policeman who tells her the sad story of the blonde she sees every night.

However, even the man is unaware of what happened to the singer, who waits for the girl for one last tragic confrontation.

Until not so long ago, Edgar Wright was one of the few directors to unite all audiences with his fast-paced, exhilarating movies.

This perfect magic began to crack with Baby Driver, which divided opinions between those who loved and detested it.

Indeed, this strange musical example that I adored in the wake of classic car movies such as Walter Hill‘s The Driver or Nicolas Winding Refn‘s Drive, unfortunately, did not convince everyone.

However, the significant box office receipts made the producers happy, and they left total freedom for his next movie, namely Last Night in Soho of 2021.

We know that it marks a big change in the director’s style, abandoning his usual humor for a dramatic story of broken hopes and dreams.

Even those who did not like this movie will admit the excellent technical level in constructing this world suspended between past and present.

Costume colors and beautiful furnishings combine perfectly with the music that glides in perfect editing.

This visual magnificence contrasts against all the characters’ ambiguity, immersed in a sinful life without redemption, except for the naive country girl.

However, this is not the case with this old-school horror film in a modern style, with some astounding sequences, such as the protagonist’s transition between reality and dreams.

Although the plot has several unexpected twists and turns, the director holds our hands in a way that never loses us, gently leading us to an ending that left me stunned.

So let yourself be carried away on the wave of nostalgia and enjoy the most glamorous horror film released in theaters in recent years.

Here we have the revelation of Thomasin McKenzie, a beautiful and delicate psychic unaware of her power to see and talk with ghosts.

Her young face, dreaming of a better future, finds her magically stuck in the past, searching for a truth no one ever wanted to discover.

Anya Taylor-Joy confirms the talent we have already come to know over the years, beginning with the excellent lead role in Robert Eggers‘ The Witch.

Here it is painful to witness the distortion of her character’s happiness as she loses her trust in others and the will to live, ending up a prisoner of a nightmare.

It is the pimp/matron Matt Smith casting her in the pit of despair, yet the actor almost succeeds in being likable even in a totally evil role.

However, avoid getting caught up in a frenzy to discover where the real evil lies in this story because several surprising twists and turns might change your mind.

Among many things I liked, the character of the policeman played by Terence Stamp appears too little time.

I would have allowed more scope for romance between him and the blond singer, yet there was probably a risk of spoiling the surprise ending.

Although Last Night in Soho was a box office flop, I had already decided to put it among the best movies of 2021, and I reiterate my opinion today.

The story alternates with an elegant rhythm, the brilliant sequences of joy and fun with a completely different soul, much dirtier and darker.

Yet the energy permeating the characters and the narrative always remains unaffected and suspended in dreaminess until the splendid conclusion.

What is your opinion about this Edgar Wright movie? Would you like it to return to the funnier style it had before, or do you appreciate the change? Let me know what you think; I look forward to your response.

The Wife – The Suffering Shadow Of A Successful Man