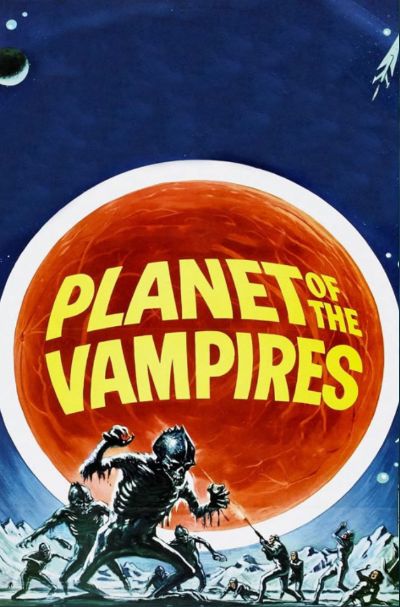 Long ago, in 1965, a low-budget Italian-made small movie, Planet of the vampires, was released in theaters.

It would greatly influence the horror and sci-fi worlds, uniting both in a unique style that many others would emulate, such as Ridley Scott‘s 1979 Alien.

Not coincidentally, the story begins with two spaceships traveling to a small planet lost in space, from where a mysterious distress communication has originated.

One of these spaceships crashes during the approach, while the other must engage in a dangerous emergency landing.

As soon as they hit the ground, moreover, the crew members lose their minds and start attacking each other.

When they regain their sanity, they cannot explain the violent episode that just happened, instead deciding to go out looking for any potential survivors from the other spaceship.

Around them is nothing but a barren expanse of rocks and glowing lava with no life forms, except for some strange lights and a thick fog appearing to move by its own will.

When they find their colleagues, they discover that unfortunately all of them are dead, having killed each other just as they were going to do shortly before.

Therefore, they decide to explore more about the planet, discovering another spaceship of a type entirely unknown to them, not far away.

Inside are the corpses of some giant aliens, long dead with apparent signs of a fight on their corpses.

At that point, they realize that the fog and strange lights are life forms capable of possessing the bodies of other species, like the corpses of their friends that return to attack them.

Being incorporeal, these aliens cannot build anything and therefore wish to steal their spaceship to leave that dying planet and start a new civilization by infecting all humanity.

The old Italian way of filmmaking

I am trying to understand who came up with the idea in 1965 to distribute this movie in U.S. theaters under the title Planet of the vampires since not a single vampire is in sight.

The original Italian title was Terrore Nello Spazio (Terror in space), which was much more apt to expect any story.

Obviously, if you are not used to watching movies from the 1970s or earlier, you will have to concede something to special effects that certainly could not be at the level of modern CGI.

In many cases, CGI becomes a trap or a shield behind which incompetent directors and screenwriters hide their incompetence.

In this case, budget limitations become propulsion for the visionary and creative flair of the great Mario Bava, one of the best (if not the best) Italian horror/thriller directors.

However, what makes the difference is how he uses the camera, lighting, editing, and music, being a talent on par with other filmmaking legends like Alfred Hitchcock or Orson Welles.

Of course, we rely on the stunning and suggestive script, which marks a twist every five minutes, astonishing whenever the characters turn a corner and discover something unexpected.

Every moment is perfectly embodied in the marvelous sequence plans and effect shots of a true master in the classic gothic style, turning this alien planet into an old haunted castle from a dark fairy tale.

I can only imagine how this movie was a breakthrough for all sci-fi and horror lovers in the 1960s, envying all those who have yet to experience it for the first time.

The myth of cinema crystallized in time

At this point, I usually tell you a little about the cast and their performances, but honestly, this is the weakest aspect of this extraordinary masterpiece.

I need help finding an actor or actress who particularly impressed me, perhaps not even because of them, due to a script focusing more on the story’s pathos than the characters.

However, Barry Sullivan fares well in the action hero role, a bit of a scientist and a bit warrior, being a good leader for his companions.

Equally good is the beautiful Norma Bengell as his sidekick and partner right up to the very last minute in a stunning conclusion ending the story like a final nail in a coffin.

The remainder of the cast performs their job fine, consisting mainly of being fodder for the slaughter, ending up murdered only to be resurrected, possessed by these space vampires (that’s what I now call them, too), and being killed again and for good.

Seeing a movie of this level, I can only blame the Italian producers of those days for never giving Mario Bava a real chance, making him work all his life on miserable budgets.

Who knows what this then-unrecognized genius could have accomplished if he had the billions of a blockbuster at his disposal?

However, if nothing else, others idolize him as he deserves, such as Ridley Scott and Dan O’Bannon, who paid homage to this masterpiece by directing and screenwriting the first chapter of the long Alien saga.

Still, the great Nicolas Winding Refn even financed a re-edition of 1965’s Planet Of The Vampires, declaring all his love for this movie.

Because watching this great avant-garde, we go back to the example of one of the forerunners like George Melies and the first exciting cinematic trip to the moon.

So if you have yet to have the chance or the desire to see it, find the time and the will to experience one of the highest peaks in the history of sci-fi horror in the seventh art.