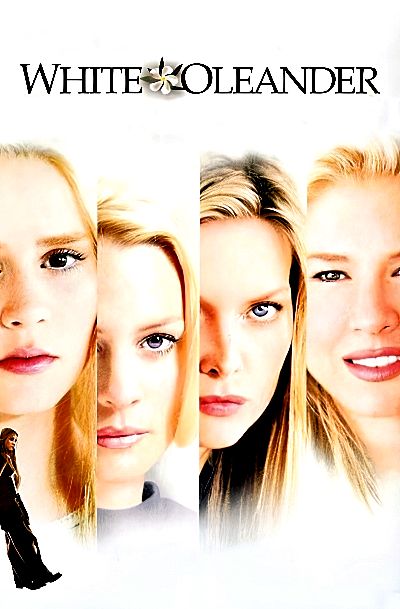 Women are strange and beautiful creatures, capable of giving tender love that can turn deadly, like the White Oleander in this 2002 movie.

Indeed, a woman extracts the poison from this seemingly gorgeous flower to kill her lover. Arrested and sentenced to more than 30 years in prison, she loses her daughter and her freedom.

Still very young, the girl ends up in an institution, and social services find her a new family. It will be just the beginning of a long odyssey for her, traveling from one home to another and meeting different people who can never fully accept her.

After each failure to fit into society, she always returns to the institution, where among many other troubled teens with family problems, she meets a boy with whom she immediately bonds.

He is a creative soul who, just like her, loves to draw and, in a way, reminds her mother, who was a famous conceptual artist.

However, the boy has a shy and gentle nature, while his mother is a cruel and aggressive dominant who doesn’t allow any way of thinking different from her own.

Over the years, moving from house to house in search of new relatives and a new life, her mother’s voice always echoes in the girl’s head.

She also grows into a beautiful teenager that men cannot ignore, including one of the adoptive fathers to whom she is placed in foster care.

Along with her first loves come terrible tragedies, just as if beauty is also a curse drawing madness around her.

However, although she tries to avoid it, her final showdown with her mother awaits in court, where she must decide whether to lie during testimony to free her.

The power and price of beauty

At first glance, many of you may think White Oleander is a 2002 movie with a tendency toward melodrama in every scene.

The cover full of actresses and a predominantly female background might give you that idea alone.

Instead, what I like most about this movie is its constant delicacy that does not try to squeeze out tears at any cost.

In the many topics it deals with; indeed, we explore the price to pay for being a beautiful woman that all men wish to possess right here.

Love humiliates you, but hatred cradles you. This is the basic tenet of the young protagonist’s mother, an insecure teenager at the mercy of fate’s waves.

She would just like to be an ordinary girl and grow up quietly, yet her beauty and fragility inevitably attract the desire of men and the envy of other women.

The strength of the narrative lies precisely in its simplicity, with no incredible twists or turns of fate raining down from the sky to help the characters fight the power.

For example, the power toward a daughter whose mother controls her even from prison, even if she desires her to be free and not subject to the outside world’s rules.

Alternatively, the power of these women’s beauty and how experience hardens them by turning it into a weapon to seduce and get what they want.

Finally, we can talk about the government’s power over homeless teenagers, moving them from one place to another and hoping everything will be all right sooner or later.

There is a lot to think about in this story, and it would be silly to call it a soap opera stretched out like a movie because it is an experience you will have to try to understand.

Four actresses, four ways of being a woman

Peter Kosminsky paces a youthful coming-of-age story quite well with a montage flowing in time over the soft Thomas Newman music.

Among the many actresses in this movie, it is spectacular to witness the transformation of young Alison Lohman.

From a little lost chick seeking protection, she becomes a beautiful, dark punk facing life and people with grit.

Quite the opposite is Michelle Pfeiffer‘s character, immovable in her resolution to transform her daughter into a hard diamond of sharp magnificence.

Just as in her strange and fascinating art, this woman paints what she sees in the world, building an impenetrable armor of cynicism and indifference.

The final dialogue in the prison yard is an intense moment between mother and daughter, becoming a duel of words as they blame each other.

As mentioned, many years pass in this story, and we see other women take care of this little girl, starting with the sexy Robin Wright bringing her closer to religion.

However, no God can restrain her envy while the girl grows and becomes more beautiful as she grows older daily.

Completing this excellent blonde poker, we also mention Renée Zellweger being the only one trying to love the protagonist genuinely.

Indeed, this might be the only joyful moment where she feels protected, although it will end very differently than she could hope.

The director bathes all these women in a white light that is at times exaggeratedly supernatural as if they were fallen angels serving their time on earth.

White Oleander was not a big hit in 2002 at the box office, attracting many fans of the book of the same name who were disappointed with how it was brought into a movie.

I consider it one of the best feminist manifestos in the film world because it does not try to be one at all. Unfortunately, audiences often decide the value of a story based on their own prejudices instead of what it narrates.