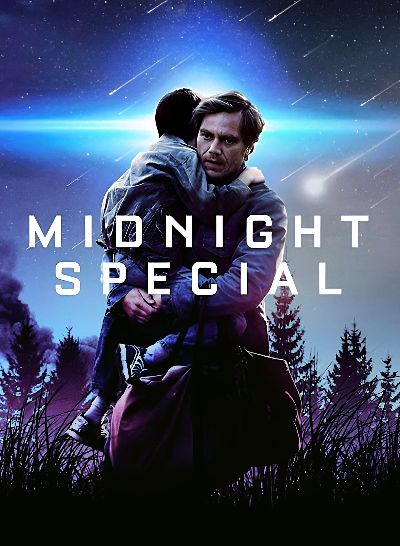 We all know how with great power comes great responsibility, yet also come many people who are willing to take advantage, as happens in Midnight Special, an intriguing 2016 sci-fi movie.

Indeed, the hero of this story is a young boy with extraordinary telepathic abilities that he can use to influence electronic devices and other people’s minds.

His power is so strong that he must always wear comically dark glasses to avoid unintentionally hurting everyone around him.

Since he was very young, a religious cult ripped him from his family, making him the center of a cult waiting for the world’s end.

When his father finally gets him back with the help of a cop friend, by then, even the FBI learns of his exceptional and dangerous abilities.

The movie begins right in the middle of this double-front hunt, with the fugitives traveling only at night, hiding in cheap hotels.

Meanwhile, the FBI raids the cult’s huge ranch, arresting all the members and questioning them about their experiences with the child.

Among the many scriptures they transcribe from his delusions and visions, secret military codes emerge that cause enormous government concern.

However, one of the cult members escapes arrest and begins to hunt the child, who, in the meantime, succeeds in reuniting with the mother he had not seen in years.

An FBI analyst is also on his trail, intrigued by the paranormal phenomena occurring along the road where they are fleeing, yet not really afraid of this strange power.

The parents are growing weary and discouraged, but the child finally discovers his purpose in realizing he must come to an appointment with destiny for the entire human race.

An idea-rich movie with poor distribution

In this case, we still remain in the range of paranormal wonderfully combined with a problematic family drama.

I want to warn you immediately that, while dealing with a child with superpowers, we are far from the fast-paced action rhythms to which Avengers fans may be accustomed.

If I must compare, instead, I recall the quiet, polite storytelling of M. Night Shyamalan‘s Unbreakable – Split – Glass, a unique superhero trilogy.

I am always happy when excellent ideas in so many comics are handled differently than usual, without necessarily striving for the adventurous climax in the good guys’ fight against the villains.

Even happier, it makes me realize I am not alone in thinking this way, looking at the immense success of Todd Phillips‘ Joker, played by the great Joaquin Phoenix.

I’m not saying that people are fed up with the usual special-effects-filled fights, always a guarantee of large receipts; however, people may finally be starting to crave something else.

Midnight Special, unfortunately, didn’t have a significant theatrical release in 2016, so audiences didn’t even know this movie existed.

It would have been more successful otherwise, certainly never reaching Marvel heroes, although it might get its share of fans recommending it by word of mouth.

Jeff Nichols‘ story aims for emotion, and gentle storytelling yet keeps a steady chase-and-hunt pace until the last minute.

The special effects are also impressive, confined to a few scenes because of the low budget, but very effective in catching the eye.

This is meant as a message to all producers/distributors: maybe these movies will never be box office champions, but at least let us know they exist.

With such a cast, do we need superpowers?

Besides failing to do justice to Jeff Nichols‘ excellent direction and screenplay, the poor distribution does not even benefit from the big names in the cast.

As mentioned, we again have Michael Shannon, a friend and faithful protagonist in this director’s movies since his early days.

The actor confirms to be among the best talents of his generation, passionately portraying his character’s suffering in the struggle against practically the whole world.

Along with him on this strange journey is Joel Edgerton, who you may know in more action roles as 2011’s Warrior, along with his giant (in every sense) colleague Tom Hardy.

Here again, he plays a character preferring facts over words, protecting this family from both attacks by the religious sect and FBI agents.

For all comic book lovers, there is also Kirsten Dunst, the first and most famous Spider-Man girlfriend from 2002, directed by Sam Raimi.

The actress is obviously not so young anymore, yet in adulthood, she finds a more fragile beauty that makes her even more shining as a mom to whom the whole world wants to take her son away.

Also in a small role is another of the most incredible talents of this generation, namely Adam Driver, who plays the only agent with an open mind and not hostile toward the superpowered boy.

Actually, the actor has not much screen time; nevertheless, he delivers a performance worthy of his career in movies such as, for example, Jim Jarmusch‘s poetic Paterson, which I had already recommended.

Finally, let us also mention the excellent performance of Jaeden Lieberher, a strange little superhero everyone would like to cage to exploit his power, not knowing his destiny is opening the way to a new future for humankind.

In conclusion, if you missed Midnight Special in 2016, you must at least make up for it today, as superpowered movies are rarely so clever and delicate.