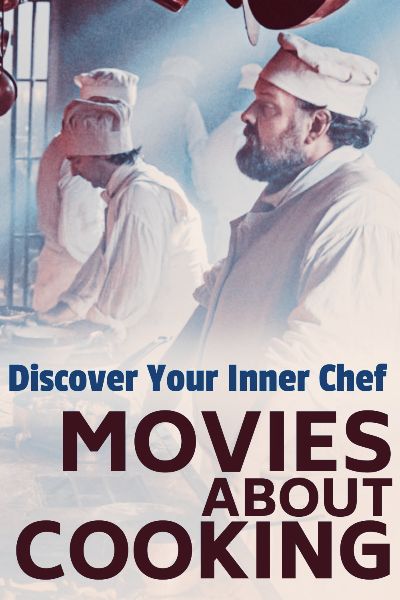 You may have guessed from today’s article title that I want to tickle your appetite for new movies to watch and your desire to cook new recipes that you may not be used to.

Making what we eat gives us more satisfaction and generally stimulates creativity to keep our brains alive as long as possible.

Of course, we may not have the mastery of a restaurant chef or even the experience of a regular housewife preparing three meals daily for her family.

However, this argument also applies to cinema. I don’t want to criticize anyone for preferring superhero movies or romantic comedies, yet I find it very restrictive never to try anything different.

Going from watching the Avengers saga to Krzysztof Kieślowski‘s Dekalog could be a traumatic experience that would make you pass out in a matter of minutes.

Being used to the adventurous pace of these stories that we can simplify into the usual plot where the good guy always has to defeat the villain, it is hard to accept a narrative that goes in a completely different direction.

Just like one food that doesn’t inspire you to look or smell it, you wrinkle your nose in disgust even before you have actually experienced the taste.

So I ask you to keep an open mind as I bring the spoon closer to your lips because today’s soup may seem strange to you at first bite.

Still, if today’s movies can overcome resistance and win your heart, then you will be looking for other directors able to cook such unique and special recipes.

We begin with a bit of Greek cooking in Hamburg’s most ramshackle restaurant, from a funny movie somewhere between comedy and suburban crime.

The owner is a young guy facing the most challenging time of his life, earning almost no money despite working most of the day.

Moreover, his girlfriend is about to leave him for a long business trip to China, while the tax office gives him no respite by demanding some heavy back payments.

Finally, the boy seriously injures his spine and can no longer stand to cook or do anything else.

So he momentarily hires an insane English cook fired from another restaurant, where he had nearly assaulted a client who dared to criticize one of his meals.

Of course, the new cook’s attitude does not mesh well with the small-time criminal customer base frequenting the restaurant, accustomed to eating something quick while conducting their business.

After some violent confrontations, however, business begins to pick up, and the boy finally seems to get out of trouble.

However, his partner foolishly loses a massive sum of money playing Poker, so they fall back to square one and have to find a new solution.

Fatih Akin writes and directs a comedy about the underprivileged side of Germany, a story about poor people living on the edge of society by raising a few bucks through scams and petty crime.

Adam Bousdoukos‘ hapless character then at least possesses something that gives him some income, although he has yet to learn for much longer.

For the second plate, we serve a lighter and more fun movie flavorful with the colorful spices of Indian cuisine.

Indeed, the protagonist is an Indian-born boy working as the right-hand man of a famous chef in New York City.

When he realizes his boss doesn’t intend to give him the promotion he longed for, he quits at that point and decides to make a fresh start.

He plans to go to Paris and participate in an internship to gain experience, yet before he leaves, his father gets sick, and he must replace him at the helm of the family restaurant.

Unfortunately, the restaurant is in disastrous condition, the interior is falling apart, and there is a lousy cook with an impossible temper in the kitchen.

Fortunately, the boy accidentally meets a taxi driver who was once a famous chef in Bombay and agrees to help him renovate the restaurant.

This chef quickly and radically changes his life, bringing him closer again to Indian culture and giving new passion to his cooking.

Besides bringing the family business back to life, he gets closer to a beautiful girl he previously worked with and comes to appreciate her in a very different light.

David Kaplan directs a movie filled with cheerfulness and bizarre likable characters, which you can indulge in learning some faraway Indian cooking traditions and secrets with.

A culture that fits perfectly into New York’s metropolitan landscape within the quirky multitude of languages coming from all over the world.

Then we add that touch of romance that never hurts, accompanying it with music by singers unknown to us but highly famous in India.

In conclusion, we have a movie that may not shine in originality but whose honest and straightforward optimism is as tasty as anything we can enjoy.

We continue talking about Indian cooking, this time moving from the previous New York to the other side of the world, Mumbai.

For all the married men working in this big city, there is a network of delivery boys visiting their wives daily.

They pick up the food baskets they lovingly prepare for their husbands, bringing them directly to the workplace by lunchtime.

One of these women is going through a painful period in her marriage, poorly regarded by her husband, who she further suspects of having an affair with another girl.

One day, the basket accidentally lands on another man’s desk, an elderly clerk now a few days away from retirement.

Impressed by the deliciousness of the food he has just eaten, he writes her a note of thanks, placing it in one of the compartments before it is returned to the woman.

After this coincidence comes a close correspondence, and they begin to tell each other every detail of their lives, along with their dreams and dashed hopes.

I don’t want to tell you more about this movie, which is among the most intimate and delicate I have ever seen, besides being an exciting window into popular Indian cooking.

Besides the platonic love between the beautiful, sad Nimrat Kaur with the serious and fussy Irrfan Khan (both excellent but unknown Indian actors), there is also the likable character of Nawazuddin Siddiqui.

This is the young work colleague who, at first, seems just an irritating and petulant suck-up.

However, the more we get to know him, the more we understand how he is just a likable underdog who just needs a chance.

Please also give a chance to these ordinary people and places story, written and directed by Ritesh Batracon with the naturalness of a friends’ dinner meeting.

At this point, we go back in time with a movie all the way to the late 18th century, appreciating a French court chef’s imaginative and tasty cooking.

Unfortunately, his master does not appreciate his work as much, so he mercilessly dismisses him when some friends ridicule him after dinner in his castle.

The man has no choice but to return with his son to the old family inn, which fell into disgrace after his father’s death.

They need help to get the place up again since customers are lacking, and the old landlord has no intention of forgiving him.

When there is a knock on his door from a woman wishing to learn his cooking, he finds new vigor by cooking low-cost lunches for the people instead of only for the wealthy nobility.

Actually, the woman is not who she claims to be, carrying out a plan to get justice with tremendous clever revenge.

However, the inn’s innovations are immensely successful, anticipating future modern restaurants and attracting the curiosity of its former master.

The latter rejects eating together with the ordinary people, not knowing the French Revolution is near, and his head would soon go under the guillotine.

Éric Besnard writes and directs a romantic manual of high-ranking cuisine, a movie of social struggle where, ironically, only the poorest genuinely appreciate the wonders of cooking for the nobility’s elite.

The actors, such as chef Grégory Gadebois and his sweet (as a dessert expert) apprentice Isabelle Carré, along with his philosophical son played by Lorenzo Lefèbvre, perform remarkably admirably.

It is a kitchen revolution followed by a freedom revolution as if the two were closely bound from our mouths to our brains and souls.

Because I am a perverse son of a gun, I want to interrupt the delicious cooking savored so far with a creepy supernatural horror movie.

Of course, let’s stay on the topic since the story occurs during a wealthy family’s dinner at their luxurious mansion in the middle of the lavish Wales countryside.

However, even this evening party is merely a charade to persuade the rich aunt to give up her slice of land to earn even more money.

Except, you cannot hold an amiable conversation with your guests and serve food simultaneously, so the landlady hires a maid to help.

The young girl comes from the neighboring village, which is increasingly poor and polluted by wild drilling, destroying the local ecosystem for a mining company.

Not surprisingly, this wealthy family is the biggest gainers from this rape of nature, unaware they are drawing upon them the wrath and vengeance of a pagan goddess.

This faceless entity, mythologized over the centuries, shows up with the face of the young maid beginning to slaughter this family without them even realizing it, except when it is too late.

Lee Haven Jones directs one of the most mind-blowing horror movies of recent years, besides inserting (at least in the beginning) some tasty moments of Welsh cooking and folk culture into the movie.

Absolutely perfect is young Annes Elwy in the role of the disturbing waitress, whose glacial fixity of her psychopathic gaze we immediately understand there is something off about her.

In just one evening, she turns the lives of Steffan Cennydd and Sion Alun Davies, troubled and spoiled sons of the couple Nia Roberts and her husband Julian Lewis Jones, a politician with neither scruples nor respect for his own land, upside down.

What else to recommend but to keep this movie as the last course of the evening, assuming that you have the stomach to watch such a horror film? I hope your tastes today are close to mine and you have enjoyed what I have brought to the table.