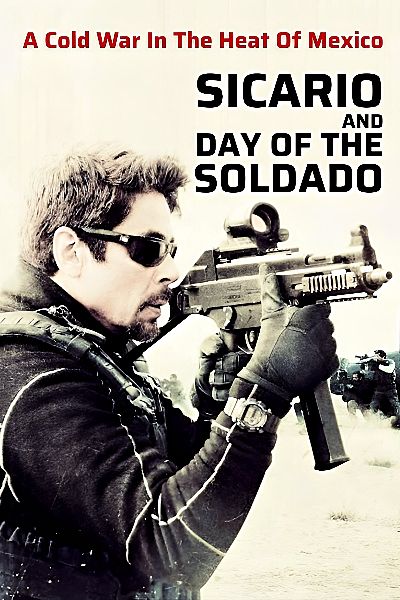 Money, drugs, human trafficking, and a lot of violence across the border between Mexico and the United States are what the two movies of the Sicario saga talk about.

A saga making its strength a brutal and unspectacular staging, relying on solid characters within an effective and ruthless script.

Compared with its attributes, it almost feels like an old noir shot in a modern style rather than a current action crime movie, as we see so many (too many, perhaps) every day.

In this world, violence has no ethics, and no one seeks moral redemption; indeed, we often witness how cops can be eviler than the criminals themselves.

Likewise, we can see how, from the political head to the police hands and the various government agencies, their directive is to maintain the established order rather than pursue the collective welfare of society.

Building on these assumptions, the Canadian Denis Villeneuve and the Italian Stefano Sollima portray an alien world to ordinary citizens.

However, there are not millions of light-years separating from this world as in Star Wars; instead, we can find the reality of Sicario’s movies practically turning the corner around our house.

Behind every face we pass walking down the street, there may be a sad story of violence, just as may be the hope of finding some goodness amid the darkness.

So let’s take a closer look at these two magnificent and unique movies, waiting to find out if a third chapter in the Sicario saga will ever be released.

It begins on the U.S. side of the border, in Arizona, with an FBI team raiding a known hideout of a Mexican drug cartel.

The place looks deserted, but unfortunately, the criminals leave an unexpected gift, planting some explosives that kill several agents during the raid.

Among the survivors is a young girl who is obviously furious about the attack, so she agrees to join an operation with some fellow CIA officers.

Their mission is to bring back a prisoner from Mexico who is intimately familiar with the cartel’s plans and how they launder drug profits into some American banks.

Joining the team is a silent Mexican agent, once a lawyer whose entire family was slaughtered by these criminals.

So from that day on, his only purpose is to dismantle the cartel and take down the boss who ordered that massacre.

This man intends to stop no one from trying to track down the killers by any means beyond laws and morality.

Just as the FBI girl will discover firsthand, this masterless hitman will not hesitate to go through her if she dares to get in the way.

Emily Blunt plays this woman trying to maintain justice even among colleagues, being unfortunately defenseless against a force beyond her own.

Indeed, Benicio del Toro is literally an unstoppable tornado pursuing his personal crusade at any cost with his seemingly calm but relentless manner.

In between, there is Josh Brolin‘s excellent mediating character as a CIA agent willing to take more action than his superiors allow him. Of course, he is glad that Sicario cleaned up the mess for him.

Denis Villeneuve finally achieves notoriety among the general public after the excellent Prisoners and Enemy, carving in stone one of the best crime movies ever seen in theaters.

The Sicario sequel resumes the same never-ending war between Mexico and the United States; we don’t know precisely how many years after the first movie.

Following some suicide bombers blowing themselves up in a Kansas City supermarket, the government decides to fight human traffickers in the same way as international terrorists.

Therefore, CIA agent Josh Brolin must return to duty to escalate tensions and instigate a war between the Mexican cartels.

So he turns to his old friend Benicio del Toro, who meanwhile was in hiding in Colombia, to join and assist him in the delicate mission.

After killing some lawyers of Mexico’s most powerful boss, the team kidnaps his young daughter, leaving behind evidence to frame the rival cartel.

Unfortunately, when they return from the border to leave the girl in the army’s care, some corrupt policemen attack and force them into a violent firefight.

To avoid scandal, the U.S. government immediately aborts the operation, ordering the agents to get rid of any inconvenient witnesses, including, of course, the boss’s daughter.

However, Sicario refuses to kill the innocent young girl, even though she is the daughter of the enemy who slaughtered his family, starting a new mission of his own to save her life.

After his cinematic debut with two Italian police/crime stories, ACAB and Suburra, Stefano Sollima lands in Hollywood with a sequel that can rely on Taylor Sheridan‘s solid screenplay.

Josh Brolin and Benicio del Toro war back as an excellent anti-cartel couple, although unfortunately, we must renounce the female presence of the beautiful and talented Emily Blunt.

It may not be exceptional as Denis Villeneuve‘s Sicario, yet the movie inherits its spirit while putting more action to the audience’s delight.

Thus, it is a good sequel continuing the story without dumbing everything down.

What might we expect from a potential third Sicario movie?

The two chapters we discussed above recorded good box office receipts, perhaps not exceptional, yet probably enough to entice producers into investing in a sequel.

This summer, we read of a rumor suggesting Taylor Sheridan had already completed the script, and Josh Brolin was ready to return to the role again.

We know absolutely nothing about a possible commitment from Emily Blunt or Benicio del Toro, so we can only hope to see them in what could be an evolution of their characters.

Denis Villeneuve now seems wholly absorbed in the Dune universe, of which the second part of the remake should soon be released in theaters, and the director also is reportedly producing an additional episodic series.

On the other hand, Stefano Sollima may be interested in returning to directing, especially after the poor results of his mixed-up action movie Without Remorse, starring Michael B. Jordan.

Certainly, Sicario‘s fictional universe leaves room for new situations and plenty of creative scope in telling and bringing them to the screen.

Indeed, the two chapters are stories that, while keeping some common traits and characters, are independent and enjoyable, one without the other.

Let us hope, if the project exists, to be given the same freedom as the previous chapters to the director who will hold the project in his hands, although for now, I will not wait for a possible Sicario 3 to arrive very soon.