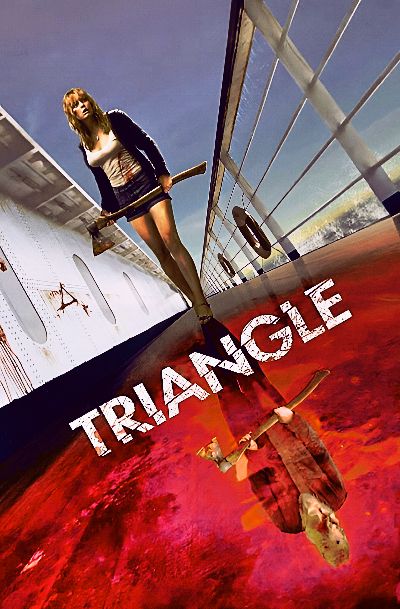 When our time comes, fate always finds us, even during a simple day on the boat with your friends, as happens to the beautiful protagonist of Triangle, an intriguing 2009 mystery movie.

The woman begins the trip without much conviction, worrying about the son she should be picking up from school in a few hours.

Indeed, since the child is autistic, he depends on his mother in every little aspect of his life; otherwise, he easily panics.

However, her friends convince her to take a little getaway to relax and tan on a boat.

Unfortunately, the trip soon becomes the opposite of relaxing when a sudden storm overturns the boat and leaves them adrift in the ocean.

After a few hours of bewilderment and fear, a huge cruise ship suddenly appears on the horizon.

This passes close enough to the floating wreck for them to climb aboard, hoping, at last, to call for help.

But the vast, elegant corridors and rooms are all deserted, and no one seems to have set foot on that ship since the distant 30s.

No one in the group seems worried or frightened, except the woman with the creepy feeling of already knowing that strange place.

Everything changes quickly when someone with a face covered by a mask begins to hunt them down, shooting at them relentlessly and mercilessly.

Initially hiding from this madman, the woman is the only one who survives, fighting him and successfully throwing him into the sea.

Desperate for her friends’ tragic fate, she looks over the parapet and sees herself along with them, adrift on the wreck as they try to board again.

At that point, she realizes to be in a bizarre time loop trap, with no idea how to get home to her son.

The Sisyphus myth goes on a seaside vacation

We saw many time-loop movies before Triangle in 2009; indeed, I had published a series of tips about it.

It’s easy to get off to an interesting start in these stories, but there’s always the risk of messing things up when you reach a conclusion.

In this case, Christopher Smith closes the circle with satisfying logic, making sense of what we have seen while leaving open questions.

The plot unfolds straightforwardly and excitingly with elegant shots and some non-trivial camera virtuosity.

The director openly declares his inspiration from the very first moments on the ship, tossing out the hint of the Sisyphus curse, which immediately puts us on the right track.

As usual with these kinds of movies, it’s fun to watch them again and again to grasp the details we missed at first glance.

Indeed, the mystery intrigue is even more enjoyable on second viewing by leaving it up to us to understand rather than clearly explaining everything.

I have read several opinions stating that it becomes repetitive in the long run, but this is more of a feeling than a real problem.

I understand this criticism, yet I only partially accept it. Although it replays various situations multiple times, I never had the feeling of watching the same thing repeatedly.

Within the story, we discover what is happening slowly and convincingly, with a pace that holds up the tension after each loop of death and despair.

There are several horror moments, but nothing ever excessive or violent, so even the most sensitive can enjoy the show without worry.

I recommend abstaining from those looking for realism, which obviously cannot be here, as it is a dreamlike tale willing to surprise rather than explain what is happening.

Few characters but many excellent moments

Melissa George is the actress standing above the whole cast, bringing her beauty to the stage that moderates with a sweet sadness and confusion.

Considering the other characters reset with each loop, she is the only one with an evolution throughout the story.

We will not know precisely how long she has been stuck in Sisyphus‘s trap even when we reach the end, although several clues hint at something.

For example, she loses in a grate the pendant with her son’s photo, where we can see countless others of the same kind that she evidently lost long before.

The same goes for the handwritten notes on sheets of paper or when she looks at herself in a mirror, through which the camera passes, reversing the perspective we view the movie.

Another disturbing moment, in this sense, is when the character, played by Rachael Carpani, crawls, dying, toward a pile of corpses that are all herself.

She and Michael Dorman‘s characters are the ones killed the most times and with the most viciousness, almost as if their happiness as a couple is what the protagonist cannot stand.

I was sorry to see Liam Hemsworth in such brief moments since I have already admired his skill in movies like Killerman.

The actor, indeed, could have been better exploited instead of always being the victim who opens the murder loop, ironically always dying the same way.

However, for the soul of the plot, it is not essential, as every situation revolves around the beautiful protagonist and her desire to have a second chance, not knowing that she already has it.

Unfortunately, Triangle was released in a few theaters in 2009, but I note with pleasure that it has gathered a group of fans talking about this movie online.

Are you guys planning to give it a chance, or do you already know about it? If you know it, let me know what details you liked best; surely I must have missed something too.

Coherence – A Journey In The...