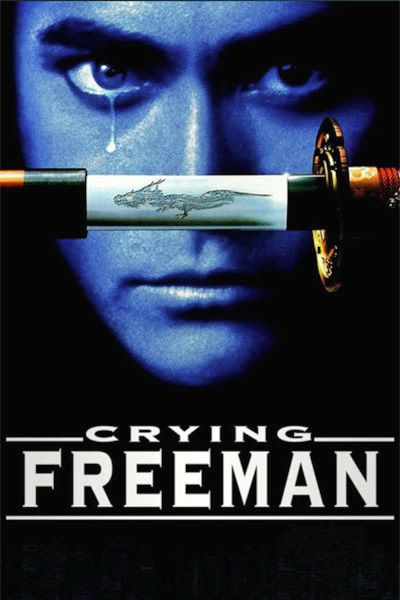 Looking for something different from the usual action movies for an evening of spectacular entertainment, let’s take a look at Crying Freeman, a mixed flavor of American, French and Japanese flair from 1995.

The story revolves around a strange assassin enslaved by a cult called The Sons of Dragons, who kidnapped and trained him by hypnosis into an unstoppable killing machine.

They also tattooed on his body the imposing Dragon, the protector of the sect, transforming him into a warrior of supernatural speed and agility.

Inside him, there still exists the conflict of carrying out these actions contrary to his will, so after eliminating his victims, he cannot avoid crying every time.

However, the cult’s psychological conditioning is too powerful, so when they order him to fly to America and kill the boss of a dangerous Yakuza gang, he fulfills it without hesitation.

For the first time, the Freeman mistakes leaving alive a witness to the murder, a young girl artist who paints his face soon after, struck by the killer’s strange attraction.

The cult obviously does not tolerate unfinished business, so they order him to eliminate her before returning to Japan.

Therefore he breaks into the girl’s house at night, yet at the crucial moment, he spares her life and makes love with her.

On the trail of these lovers are both the Sons of Dragons and the Yakuza, along with some policemen who do not want to drop the case.

They then flee to Freeman’s secret island, a refuge, and sanctuary where the man can best defend his beloved against the oncoming army of criminals and assassins.

Still, a victory may be impossible against so many men preferring to choose an unpleasant compromise.

The story of Crying Freeman comes from a famous manga series from the 1980s, which had more movies in the East before coming to this 1995 Japanese American production.

Unfortunately, I am unfamiliar with the source comic, so I cannot compare and say whether the cinematic version is better or worse.

For sure, the narrative soul is undoubtedly Japanese in the slow pace and some absurd yet perfectly believable situations and characters set in this weird killers’ world.

Equally clear is how some kind of slapstick spectacle is purely American instead, creating that enjoyable mix of shootouts along with choreographed martial arts and sword fighting.

Moreover, behind the camera, we have French director Christophe Gans, whose screen adaptation of the famous video game Silent Hill, for example, I recall with pleasure.

As I often say for many of the movies I recommend, I want you to expect something other than a timeless masterpiece that only I have truly appreciated.

Crying Freeman definitely has flaws I do not mean to deny, such as stretching certain dramatic moments or some action scenes too long.

There are too many characters in this story, probably taking some of the most beloved ones from the many comic book editions.

Yet just as honestly, anyone who watched it has to admit the director worked remarkably well on the script, effectively condensing the long epic of the manga into just over an hour and a half of cinema.

The action scenes are directed in an exaggeratedly flawless manner within a good dramatic narrative, compounded by the romance between the killer and what is supposed to be his latest victim.

So let’s stop necessarily looking for those movies critics award 10 out of 10, simply enjoying the entertainment that skillfully blends so many different cultures.

Good actors with passion in the role

Besides Christophe Gans‘ cinematic craft and comic narrative grounding, 1995’s Crying Freeman is a movie that also relies on a remarkably effective cast.

In the lead role, we have Mark Dacascos, an excellent martial artist, and former stuntman whose great skill we admire during the many action scenes.

Moreover, the actor has the appeal and charisma he brings to the character, plus he has lived many of his teenage years in the East studying different styles of Kung Fu and Karate.

Therefore, despite his overtly American appearance, he still has a believable attitude as a Japanese hitman.

Equally American and charming is his female companion, Julie Condra, who relates perfectly with the leading actor having excellent immediate chemistry.

Indeed, the movie’s stars became so close that they ended up falling in love and then getting married in real life.

As I said, this story may have too many secondary characters, which takes away a bit from those I thought were more interesting.

Among them, I certainly put the excellent Tchéky Karyo, already a splendid protagonist, as a trainer in love with his pupil in Luc Besson‘s legendary La Femme Nikita.

Here the French actor is a corrupt San Francisco cop who supposedly investigates the Freeman murders yet secretly works for the ruthless woman at the head of the Sons of Dragons.

She is played by Yōko Shimada, whose evil gaze perfectly embodies the centuries-old madness of this murderous sect.

Equally, however, she has a code of honor to which she strictly complies, even doing what she would not wish, as we witness in the ending.

I hope I have intrigued you enough to tempt you into giving this movie a chance because, while imperfect, it is a solid action movie like we don’t see many these days.

The ensemble package is quite luxurious, and the fighting style will surely captivate you, carrying through to the final outcome a good mix of sentiment and revenge in pure Oriental style, yet from a Western perspective.