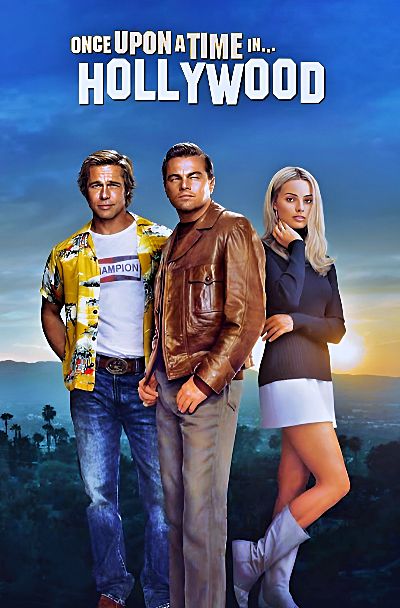 If ever there was a movie dividing audiences halfway between those who love or hate it, this is definitely Quentin Tarantino‘s 2019 Once Upon a Time in Hollywood.

Indeed there is no middle ground for personal experience after watching this bizarre director/screenwriter’s ninth movie.

These are an action movie actor losing notoriety and his best friend and cinematic double.

Lacking more essential roles, the actor agrees to be the villain for a western series episode while his friend bonds with a sexy hitchhiker who takes him to Charles Manson‘s hippie camp.

Indeed, side by side with their story, we follow the life of Sharon Tate, a beautiful young actress, and wife of famous director Roman Polański, which in reality, was, unfortunately, a victim of Manson’s maniacal cult followers.

Thus we see the girl enjoying life by going to movie theaters and parties among numerous other Hollywood stars, such as Bruce Lee or Steve McQueen.

Returning to the other two characters, after the western series revived the actor’s career, he gets the lead role in some b-movies made in Italy.

Of course, his trusty stuntman friend accompanies him on his adventure, always playing the most dangerous scenes in the actor’s place.

When they finally return to America, we arrive at the fateful day of the middle-of-the-night assault on the Polański mansion.

Fortunately, in this fictional world, we may see a very different ending from the bloody truth of that tragic night.

The timeless love of cinema

Quentin Tarantino creates a piece of work that is one of a kind, indeed challenging to fit into any cinematic genre.

You may have already guessed that I love this movie; otherwise, I would not recommend it to you on my site.

I don’t pretend to get into this strange director’s mind and know what he intended to tell us with this story, so I just tell you my thoughts instead of his.

Once Upon a Time in Hollywood is a 2019 movie that takes us back to the exciting beginnings of the new American cinema in the late 1950s.

For example, they could find something in the French New Wave or the poor but exciting Italian B-Movies, born in the wake of the early success of Sergio Leone’s westerns.

Tarantino pays heartfelt homage to the latter especially, taking his protagonists on the sets of Sergio Corbucci and Antonio Margheriti, two extremely prolific Italian filmmakers of that period.

Love is also not lacking in the series and characters passing on the TV screen during those years, as well as the changing fashion world and music equally.

Along with nostalgia for those days, there is also the regret of when cinema could be violent and entertaining without worrying about necessarily being politically correct as today.

On this time capsule journey through the dreamy eyes of a child, we arrive at a final act where we can finally remember that Tarantino is the director.

The final explosion of violence and black humor is the exclamation point of a strange experience that some of you may not love but will still be hard to forget.

Actors at their most potent acting peak

As always, Quentin Tarantino can rely on a top-notch cast.

After his outstanding racist slaver in Django Unchained, Leonardo DiCaprio returns with an even better performance.

Playing this man who is weak in his humanity but solid and charismatic on the set, he embodies what makes the cinema world remarkable in every silent glance and unstoppable dialogue.

By his side is an extraordinary Brad Pitt in a more physical and entertaining role, such as during the much-criticized duel against Bruce Lee, which I found amusing and perfect.

Despite his great strength, this stuntman is still a quiet man, never looking for confrontation yet always ending up in trouble, as in the bloody ending climax.

Regarding the more practical side of this story, however, it might have been challenging to bring an icon like Sharon Tate to the screen.

Yet Margot Robbie does a sublime job enlivening every scene with her innocent beauty and joy of life into one of her best career performances.

Obviously, there is no shortage of all Tarantino’s actors/friends we have already seen in his other movies, who play minor roles, but each has their relevance.

We find Bruce Dern, the unforgettable detective from the legendary The Driver, being hilarious while sleeping peacefully among Charles Manson’s killers.

Then again, we have the odd couple Kurt Russell and Zoë Bell, mortal enemies in the spectacular car duel in Death Proof, being here instead of hysterical Hollywood producers.

Finally, we behold the small cameo of Michael Madsen at the beginning, famous for burning cops alive while ripping their ears off, as in Reservoir Dogs, Tarantino’s dazzling directorial debut.

Criticism aside, Once Upon a Time in Hollywood grossed over $370 million in 2019, so no one can deny it was a successful movie.

I recommend it to all diehard movie lovers to understand firsthand how this world once functioned, of which only the pale, lifeless shadow often remains today.