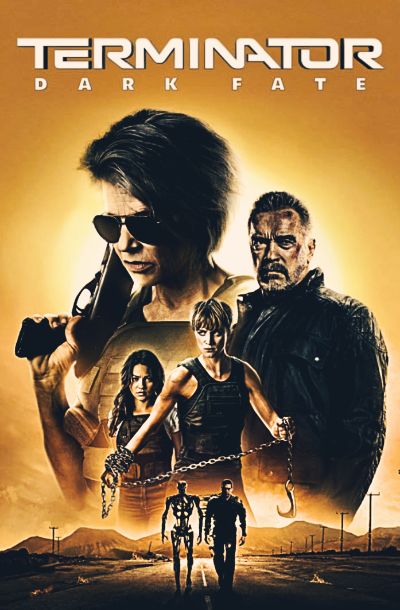 For better or worse, the Terminator saga has made us suffer and joy with 40 years of movies until the last chapter in 2019, Dark Fate.

Completely ignoring all sequels after Judgment Day, the story reboots with Sarah and John Connor finally free after obliterating the future of Skynet, a ruthless AI that would have destroyed the human race.

They cannot know if their enemy had sent more killer robots to complete the mission if the first two failed.

So John dies anyway, killed by another Terminator in the same guise as the one protecting him a short while earlier.

However, this does not change Skynet‘s defeat, which will never exist again since the Connor family destroyed the research lab which created it.

Sadly, the human race still finds a way to doom itself by creating another system called Legion that will eventually exterminate almost all of us.

Once again, resistance will arise from the apocalypse and ultimately defeats the robots, so this system sends other Terminators into the past to eliminate humanity’s future leaders.

One of them is a young Mexican worker who soon discovers her fate when one of these shape-shifting robots takes her father’s appearance and tries to kill her.

Fortunately, a young warrior from the future comes to help her, a girl with several artificial implants, to enhance her strength and speed and be on par with the Terminators.

The model she must fight against is a Rev-9, capable of splitting into two robots who are seemingly impossible to defeat.

Coming to rescue them, however, is Sarah Connor, sent by a mysterious informant, who miraculously saves their lives.

These women will then search for this anonymous benefactor, who lives in Texas, all fighting together for the survival of our species.

The resurrection of a brand?

Let’s be clear: the first two movies in this saga, directed by the brilliant and avant-garde James Cameron, remain unsurpassed to this day.

The third chapter, Rise of the Machines, was mediocre, yet fun enough to watch (sadly funny at times) and at least concluded with a bearable ending.

On the other hand, the following Salvation and Genisys were such a disappointment that, as a fan of the saga, I do not even dare to remember them.

With 2019’s Terminator Dark Fate, we are finally back on the right track after nearly 30 years, with a movie that fits logically within the saga.

Tim Miller, in his second stint after the massive success of the hilarious Deadpool, is at the helm of this rebirth.

The director handles the pace much better than his predecessors in the ill-fated post-James Cameron chapters, yet we see his limitations, especially in the action scenes.

Indeed, the massive use of CGI in the numerous fights, shootings, and chases has many merits in the spectacular sequences but also many flaws.

Characters often throw themselves at each other almost comically, looking almost like mannequins, a problem we could ignore in Deadpool as it was deliberately exaggerated in every aspect.

However, the director does much better in holding this strange group of female warriors together on their long journey from one side of the Mexico-Texas border to the other.

Finally, each character’s introduction to the scene makes sense and does not happen in a sadly forced and far-fetched way.

Without diminishing Tim Miller‘s work, which is still admirable, James Cameron would have done much better.

Still, the filmmaker is wholly absorbed in the billion-dollar Avatar saga, of which the second chapter, The Way of Water, will soon arrive in theaters.

Talking about this saga’s newcomers, future warrior Mackenzie Davis is the one who convinced me the most.

While maintaining an athletic and feminine look, the actress has an aggressive and determined attitude with which she convincingly brings her character’s human/robotic nature to the screen.

In contrast, for most of the story, Natalia Reyes did not particularly excite me as the Terminator’s new target, seeming more like a doll dragged around by the other characters.

However, in the final part, she gets some redemption, especially in an excellent flashback where we see her leading some soldiers who will later become the resistance against the robots.

Concerning the evil robot, played by Gabriel Luna, I have no particular criticism or even too many compliments.

As mentioned, many scenes with this character are almost entirely CGI, so the actor could not contribute much to this part.

Unwilling to be nostalgic at all costs, the movie only takes off with the entrance of its historical characters.

At the threshold of 60, Linda Hamilton still proves she can kick ass once upon a time, especially as we remember her in Judgment Day, where she was an unstoppable action woman.

Arnold Schwarzenegger was a bit more tired (and older), but he compensated for his once-physical might with his usual humor and charisma.

This character of a robot finding a new purpose reminded me a lot of the mercenaries in Ronin, former secret agents without a master anymore who finally do what they think is right.

It is hard to say whether Terminator Dark Fate will have a sequel, as this movie grossed over $260 million in 2019 versus the over $180 it cost to make.

Will these results be enough to satisfy the production and continue this story? Or should we endure another reboot with an uncertain outcome? And above all: James Cameron, we beg you, please come back and direct this great saga again!!!