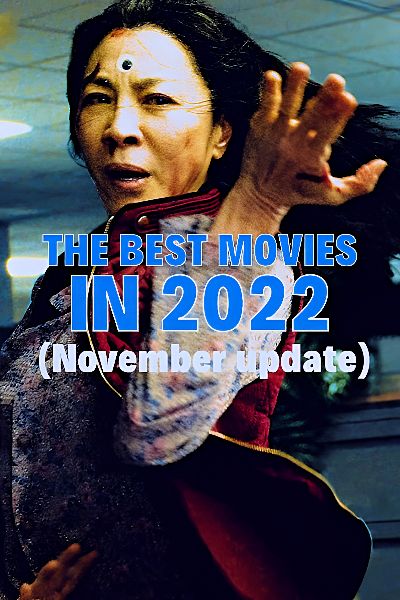 We had already recommended a handful of movies as the best of 2022, yet as it is almost late November, why not add a few more?

Often I need help to frame when exactly the movies I recommend came out.

I more willingly remember what kind of stories they were or maybe if something particularly struck me in the director’s choices or any particular actor’s performance.

However, does it really matter so much after all?

One of the best things about cinema is a timeless world where we can create our experience according to what we’ve had a chance to see.

For example, I loved watching specific adventure and action stories in my youth, often having to forsake horror since I watched television with my sensible parents.

Can this also apply to some of you with children who don’t want to bore them with movies they may not be able to understand?

Especially at the cinema nowadays, family movies are often shown, whether they are the immense superhero universe or colorful and funny cartoons or comedies.

However, this distribution deprives many fathers and mothers of the opportunity to watch movies that they might even love. Yet, they give up on the happiness and entertainment of their children.

If, for example, you belong to this category, or more simply, you know only about that most widely sponsored and discussed cinema, then the following tips may interest you more than you imagine.

So let’s sit comfortably and dim the lights in the theater because today we have all kinds of movies for all tastes.

Dead for a Dollar

Round two of the Best of 2022 for November starts with the director of several of the best action/western movies ever, Walter Hill.

It all begins with the wife of a rich American man fleeing to Mexico with a young soldier, obviously to the anger and shame of her husband.

Therefore, he unleashes a bounty hunter after her, along with a friend of the soldier, to find the woman and bring her home.

Except the two men are told a somewhat different story, that the woman has been kidnapped for ransom.

So when they find and hear her story, they feel betrayed and decide to call the rich man to come all the way to Mexico and settle his problems on his own.

Unfortunately, the woman and her lover made arrangements to be protected by a criminal gang, which now expects their money.

When the boss of this gang realizes that he will not see a penny, the moment of reckoning then becomes inevitable.

The German actor becomes the great American director’s typical antihero, such as the colorful gang in the legendary The Warriors.

As his arch enemy we have Willem Dafoe, initially almost a secondary character who later becomes the final pivot of the bloody adventure.

Finally we mention the revelation Rachel Brosnahan, a woman tough as steel in a macho world like the old wild west.

We can summarize this movie in three concepts: never believe you own a man just because you pay him; never promise something you are not sure of to a Mexican; and above all, never insult your wife when she points a gun in your face.

Everything Everywhere All at Once

by Dan Kwan and Daniel Scheinert

From the old American gunslinger world, let’s move on to a crazy sci-fi movie that is not only among the 2022 November best but absolutely among the funniest I’ve ever seen of all time.

It stars the stunning Michelle Yeoh as a tired and unfulfilled mother and laundry owner.

On her hard day comes a husband wanting a divorce, her father visiting from faraway China, and finally, a tax assessment that could also ruin her business.

But just when it is time for the crucial face-off with the tax inspector, her husband suddenly animates like someone else.

The alternative husband comes from one of the infinite universes, similar to ours but all different, all involved in a war against a mysterious and relentless world-destroyer whom everyone calls Jobu Tupaki.

Indeed, it was one of the many versions of this woman creating the technology to travel between these parallel realities, and she is the only one capable of stopping this terrible and implacable monster.

However, when she finds out who the monster really is, at that point, she is no longer as confident about fighting him, and therefore she too becomes an enemy of the whole grand multiverse.

I realize telling it this way may sound like a highly messy story, yet believe me, it is anything but, and it is precisely one of those family-friendly movies we discussed in the beginning.

A24 is a guarantee capable of offering modern cinema such as, for example, Men by Alex Garland (recommended in the previous article) or The Lighthouse by Robert Eggers.

In this case, it is a perfect movie for anyone loving superheroes and fighting, along with terrific special effects which are finally used in an original and irresistible story.

From the infinite multiverse universes, let’s instead lock in the home of a young programmer in Steven Soderbergh‘s 2022 movie.

The Ocean Eleven and Contagion director chooses the young Zoë Kravitz as the protagonist, following the fame that the singer Lenny Kravitz‘s daughter achieved as Catwoman in the new Batman saga reboot.

Here the actress is a female character who is always locked up in her house and never goes out after being the victim of an assault.

The poor girl was learning to overcome her phobia when COVID struck globally locking up all of humanity in quarantine for months on end.

Fortunately she is a skilled programmer working remotely for customers of a system called KIMI (virtually identical to Amazon’s famous Alexa) helping them use their devices.

During one of these calls she believes to be listening to an assault on a woman, so she asks the company’s lawyers for assistance in figuring out what she should do.

However, the company gives her vague answers and seems to have no intention of intervening, unwilling to create a scandal and cause the stock value to plummet before a major corporate merger.

At that point the girl overcomes her fears and investigates on her own, not knowing, however, that some hired assassins are already at work to shut her up for good.

Steven Soderbergh takes inspiration from Rear Window, an Alfred Hitchcock classic featuring a man in a wheelchair convinced that his neighbor killed his wife.

In this case, the window is instead on the computer screen, through the applications with which large corporations steal our every piece of personal information.

Definitely I recommend Kimi to all crime and new tech lovers, perfectly mixed in this strange little among the best movies in 2022 November.

If the previous movie unfolded in a small apartment, this one is even more oppressive and claustrophobic and is definitely one of the best exciting movies of November 2022.

Unfortunately, only a few people know Lucky McKee, one of the best recent new directors of the new millennium, but obviously, you always have time to make up for it.

Why not start with his latest effort, Old Man, where we see a man waking up in his lonely cabin in the middle of the mountains.

The protagonist is Stephen Lang, the villainous colonel from Avatar, and the menacing blind man from Don’t Breathe, here engaged in a one-man show at the highest level.

Indeed, a clueless young man knocks on his door after getting lost in the forest, happy to have found shelter.

However, his guest soon realizes he is dealing with a homicidal maniac holding him at rifle point to stop him from leaving.

If he wants to survive, the man will have to tell him his life story, hoping it will be interesting enough for the host not to pull the trigger and end it for good.

These kinds of movies tend too often to become theatrical plays, frequently relying on excellent dialogue and an exciting story, which only sometimes equates to making fantastic cinema.

Danger averted thanks to the excellent craft of Lucky McKee, who always places the proper camera movement on detail while mounting tension with skillful patience and intelligence.

Equally solid is the Stephen Lang performance, an Actor’s Studio veteran who carries the story on his shoulders toward a circular ending that coincides precisely with the beginning.

This movie is a must for all Misery Stephen King-style lovers, where one character alone is enough to narrate the folly of all mankind.

We elegantly conclude this second Best of 2022 November with an old-time gangster movie, again set entirely in a tailor’s humble workshop.

After making his screenplay debut with The Imitation Game, a fictionalized biography of the brilliant mathematician and computer creator Alan Turing, Graham Moore sews a perfect suit for the great Mark Rylance.

As mentioned above, the British actor plays the protagonist of this story, who is a tailor working in the heart of 1950s crime-ridden Chicago.

After Al Capone‘s death, the family split into many small gangs rivaling each other for control of the city.

One of these bosses is this man’s benefactor, who allowed him to open his men’s tailoring business in exchange for some small favor to help the gang.

Indeed, in the back of the store is a confidential box where these criminals leave messages and recordings for their secret communications.

Unfortunately, in the gang’s core is an insidious snitch for rivals, a group of Frenchmen headed by a black woman who dominates gambling in the city.

Throughout one endless night, the tailor and his trusty secretary will be at the center of this war between two ruthless armies that take no prisoners.

After Steven Spielberg relaunched his career with Bridge of Spies and Ready Player One, Mark Rylance is now at the peak of popularity more than ever.

A peak that comes late in his life, yet one he honors with a superb portrayal of a silent, charming, and impenetrable man.

Equally intriguing is his trusted and mysterious secretary, Zoey Deutch, on the surface, an innocent young soul who later turns out to be something else entirely.

We, therefore, appreciate this new director’s debut as the exclamation point in this best of 2022, thus looking forward to his next movie.

What do you think of this list I proposed today? Is there anything you might be interested in? Or do you have other titles to recommend? Either way, I’m all ears toward any critiques and suggestions, which please leave below in the comments.