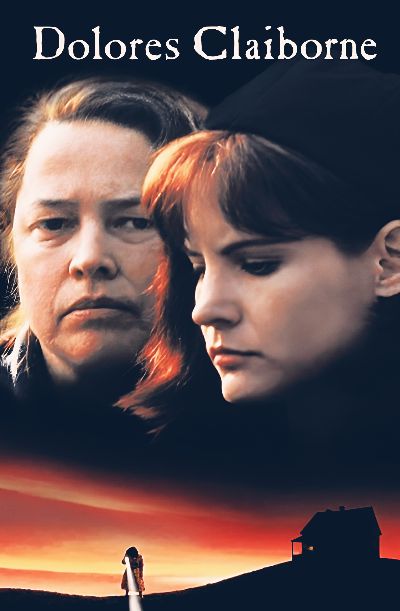 Stephen King is an author who needs no introduction; after nearly 50 years of success is a plethora of movies inspired by his novels, such as 1995’s Dolores Claiborne.

Unlike his other stories featuring spirits, demons, and monsters of all kinds, in this case, we have a small and exciting family drama instead.

It all begins with a daughter who must return to the home she left many years ago, going to live in New York and becoming a successful journalist.

The opportunity to reunite with her mother is unfortunately not the best, as she is accused of the murder of her elderly matron and employer.

Although they are evidently glad to meet again at first, old buried grudges begin to rise to the surface soon after.

Indeed, these two women have not seen each other since the family’s s father died, falling into a well during an eclipse, completely drunk.

But the old detective had never believed their version, so today, he is more convinced than ever of the mother’s guilt for the new crime.

On the other hand, the daughter is unsure what to think, as she was still young and does not remember those far-off days very well.

Spending time and trying to help despite her stubbornness, however, fragments of that forgotten past begin to emerge.

At that point, she understands why her life is so messed up, why she has no man, and is constantly drinking and taking all sorts of pills.

Her father was also a drunk, easily irritable, and violent man, also slimy toward her when she started becoming a girl.

These two murders will reunite in the present before the mother’s final confession, which will close this tragic story forever.

Dolores Claiborne is a remarkable Stephen King novel, narrated in first person as a confession by the protagonist and linked to another story, Gerald’s Game, of which there is no mention in this 1995 movie.

It would have been difficult to tie such different stories together, although having at least a small reference might be nice.

Returning to the movie, this heartbreaking emotional merry-go-round works primarily because of the magnificent performances of Kathy Bates and Jennifer Jason Leigh.

These actresses engage in an acting duel throughout every dialogue, silence, and glance inside a dark fairy tale working to perfection like an infallible clock.

Framing the unhappy life of a woman as the victim of an abusive man, the daughter understands herself and is finally able to make peace (perhaps) with her past demons.

We had already admired Kathy Bates in the terrifying 1990 Misery, another movie born from Stephen King‘s indefatigable imagination that was a turning point in this actress’s career, coming later in huge blockbusters such as Titanic.

In this case, her performance is equally unmissable, perhaps even superior, because her role is a believable person in her human frailty but also fierce determination.

Never underestimate what a mother would do to protect her children, as the drunken husband played by David Strathairn will find out the hard way.

The daughter is equally adamant in her stubbornness, however, assuming that her mother is guilty of both murders, having forgotten her horrible past.

However, Jennifer Jason Leigh does not merely imitate her older colleague, bringing to life a suffering and angry character confusion who never knew peace in her life.

Despite their suffering, in the end, all these women need is closure before they can truly begin to live again.

Although Dolores Claiborne is a female-soul tale, let us not underestimate the men’s contribution in this 1995 movie, starting with director Taylor Hackford.

Although he has made numerous hits in his career, such as The Devil’s Advocate and An Officer and a Gentleman, this is the movie I prefer and one of my favorite Stephen King novels.

It could have been difficult to hold together the numerous flashbacks that reconstruct a shattered story from scratch, just as we see the woman’s image split when she breaks a window of her house.

Yet the director keeps the pace straight and narrates this female epic with excellent fluidity without wasting time with unnecessary scenes or characters.

Next to the excellent actresses, we have mentioned, we have a father/master David Strathairn portrayed in his skill as both weak and cowardly and equally vulgar and cruel.

Even better is another of my all-time favorite actors, Christopher Plummer, whom I have repeatedly mentioned for his outstanding performances in such movies as All the Money in the World and Inside Man.

Here the actor is an old cop at the end of a near-perfect career, except for failing to frame the tough and cunning Dolores Claiborne for the murder of her husband.

Thus he becomes the woman’s greatest persecutor, giving no respite to either her or the daughter until the spectacular and exciting final confrontation.

You can tell from my words that I have a great passion for this movie, as I then have toward many of the novels of the great Stephen King.

Over the years, I dreamed and feared in his worlds brought to the cinema by great directors like Stanley Kubrick, Brian De Palma, and John Carpenter, just to name a few.

Although today, perhaps his stories no longer have the power they once had (while always remaining quite good, mind you), I will never forget one of the greatest and most influential authors in literary history.

Movies that take place in One...