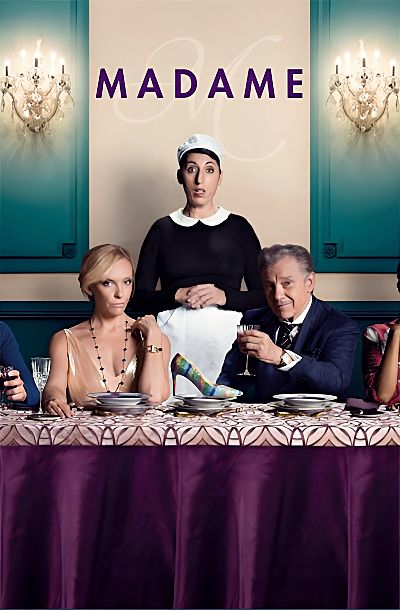 Sometimes life can suddenly change thanks to a simple dinner with friends, as we see in this 2017 movie, Madame.

Indeed, this story begins with a wealthy married couple inviting friends, relatives, and artists to their large house in Paris.

However, the only guest they really care about is an English art dealer who is supposed to appraise one of the most valuable of their antique paintings.

At the last moment, they discover that they have miscalculated and that there are thirteen of them at the table, so the superstitious wife orders their maid to join the dinner party.

In intentions, her presence should be quiet and discreet, but her explosive character and irresistible likability make her the evening star.

She especially impresses the art dealer, who asks the couple’s son for her phone number and begins courting her.

The man thinks she is a wealthy aristocrat, but he would still love her even if he found out who she really is.

This should not be a big problem for the wealthy newlyweds in Paris, but especially the wife becomes venomously envious of the maid.

She cannot understand how anyone could like a woman she considers so inferior, unglamorous, and not at her level of social status.

Indeed, her marriage has several secret lovers, although they pretend to be a perfect couple in front of their friends.

To make matters worse, she is unaware of how serious their economic situation is and how crucial it is to succeed in selling the painting that the Englishman has to appraise.

But only some of these expectations will be rewarded as they deserve, as their lives drift in different directions.

A gentle but realistic comedy

Madame is one of those comedies that show in 2017 how to entertain audiences without making a movie silly or vulgar.

It is not easy keeping up the irony with good manners, as classics of yesteryear like Sabrina with Humphrey Bogart and Audrey Hepburn once could be.

Director Amanda Sthers packs a social satire that seems to follow Hollywood’s standard, only to surprise us with something different in each scene.

Of course, the most hilarious aspect is the class struggle between the wealthy wife and the poor maid, where no one emerges as the winner.

Indeed the poor maid is an honest and hard-working woman, naive to the point of not even understanding her mistress’ growing hatred for her.

We cannot be so naive as to ignore how money makes the world go round, but is it right to have this sense of superiority to be richer than others?

During dinner, we can see that despite better culture and fancy clothes, these high-society men and women have the same stupid problems as people with much less money.

How come this rich woman, despite still being young and beautiful, feels irrepressible jealousy toward the unexpected success of her maid?

Perhaps because she remembers how she was before being rich, taking back to an age of dissatisfaction she wished to forget and is reliving again, despite the money.

Therefore he regresses almost childishly with petty spite and insults hidden behind her fancy words and attitudes, reaching the point of spying on her love dates, along with her annoyed husband.

It is precisely here the movie veers on Pedro Almodovar‘s style, from which Amanda Sthers takes inspiration, driving us toward a sad ending yet open to new opportunities.

Without hesitation, the real soul of the story is Rossy de Palma, a modern Cinderella with a sunny face and full of exhilarating vitality.

She has always been a protagonist of Pedro Almodóvar, carrying on years of magnificent Spanish comedies with her irrepressible personality.

In this case, the movie has a more American rom-com pace, yet her European heart emerges precisely because of her peculiar beauty and sensitivity.

Michael Smiley is an equally unusual Prince Charming who seems almost out of place among the other severe and vain dinner guests.

Quite good in comedies and dramas, I have a fantastic memory of this actor as the mercenary co-star of Kill List, a little masterpiece directed by Ben Wheatley.

Here he is a mischievous aristocrat who passionately lives out his romantic affair with the maid, being just as wry and brash as she is.

We have two Hollywood stars as a counterbalance, creating an excellent contrast to the European actors above.

Toni Collette brings the protagonist’s nemesis to life with great class (and nastiness), treating her maid as part of the furniture until she can no longer ignore her presence.

What else to say about this excellent actress whom we have all admired, for example, in movies such as Hereditary, where her chilling performance is worthy of inclusion in every acting school.

On the other hand, Harvey Keitel (whose Holy Smoke I recommend) is a more relaxed character, at least in front of his wife, as he privately hides from her his fear of losing all their money.

His maturity is the same as the narrative essence of Madame, an excellent light comedy that, unfortunately, was not a hit movie in 2017.

Only stories of confused romantic teenagers work today while seeing adults in the same situation blurs us?

Let me know what you think if you, too, are delighted by a fairy tale that is close to our reality and that does not want to comfort us or give lessons but just precisely tells us a story.