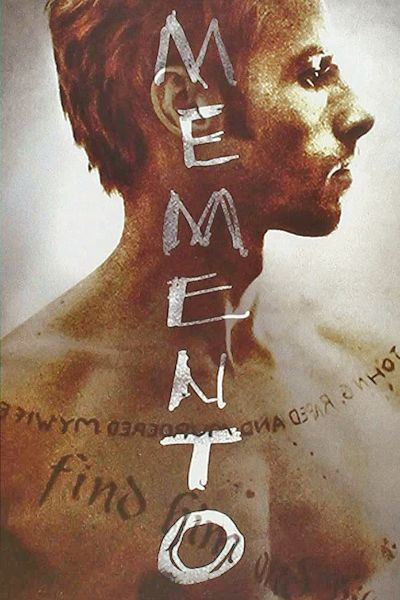 Christopher Nolan is undoubtedly one of the most beloved directors of this generation, but how far has he gone from the movies of his early days, such as Memento from 2000?

I bet his hardcore fans know it by heart, yet some of the younger ones only watching recent cinema may have never seen it.

The plot concerns a young boy who once was an insurance investigator, but after a robbery in his home, he is seriously head injured and can no longer work.

Indeed, the aggression permanently damaged his brain, and from then on, he could no longer have new memories.

However, everything else that happened before is firmly etched in his mind, such as the tragic death of his wife, whom these robbers raped and killed.

With no real purpose in life anymore, the man only longs for revenge, hunting down these criminals and tattooing on his body the most essential clues not to forget them.

Assisting him is a strange policeman working undercover to frame drug dealers and a girl who is engaged to a member of this gang.

Day after day, this absurd detective puts together the pieces of this investigation, which he doesn’t even know how long he has been carrying on anymore.

The only thing sure is the tattoos and photographs of all the people he meets, on which he writes his notes to remember who they are and what they can do for him.

Still, he realizes the pieces do not fit in this strange puzzle, and perhaps his so-called friends are actually using him for their own interests.

More simply, however, perhaps he is only deceiving himself because the truth would otherwise be too hard to bear.

Success and money are always a benefit?

Until now, Memento stands as the best expression of all the directing qualities of Christopher Nolan and the compelling writing of his brother Jonathan.

Together they have undoubtedly always worked at their best, pursuing their own poetics of thrillers and noirs that almost always revolve around the same main topics.

Reality and illusion, for example, often blur against characters stuck in situations they only partially understand.

Unfortunately, the greater the success and budget available, the more Christopher Nolan seems to push forward the aesthetics and spectacularity of these stories at the expense of actual narrative substance.

I do not intend to say that his productions are stupid; far from it; movies like Inception or Interstellar ( to mention two that I did not like at all) have extremely intriguing premises and many ideas.

However, as I was trying to say, his desire to spectacular anything and overstretch certain dialogues, and situations always make the story too messy and tedious.

When, on the other hand, he finds scripts more within his own ideas and themes that he loves, such as The Prestige and Dunkirk, this director instead proves to know how to take full advantage of a large amount of money and famous actors at his disposal.

Of course, sometimes audiences are too harsh against some of his movies; for example, I found excessive criticism for Tenet, a decent sci-fi espionage returning somewhat to a circular tale like 2000’s Memento.

I would like to see the Nolan brothers return to a small production instead of churning out one blockbuster after another.

They don’t lack talent and good ideas, but perhaps the excessive desire to forcefully wow audiences has become a burden on their cinema.

A tattoo is forever

Getting back to talking about Memento, what else to say without spoilers except that it is simply one of the best movies I have seen since 2000?

Guy Pearce finds the best performance of his life, sculpting in our imagination a character that (unlike him) we will never forget.

His nude body covered with writing is now a movie icon, on par with the LOVE and HATE tattoos on the knuckles of Robert Mitchum‘s hands in The Night of the Hunter.

This character, however, is not cruel but often just confused, though extraordinarily determined to solve an impossible case given his mental condition.

Also superb is the performance of Carrie-Anne Moss, whose career was unfortunately lost in the fog after her equally iconic role as Trinity in the celebrated Matrix saga.

Here the actress plays an old-time femme fatale, beautiful and ruthless in her personal interests but also has her moments of romance and sweetness.

Like the best and most complex characters in cinema, this ambiguous woman captivates with both her fragility and strength.

Also from The Matrix comes Joe Pantoliano, whom I have always found a very underrated actor who gives a superb and compelling performance here.

From the moment we see him, we know immediately that he is a scoundrel and trickster, yet his funny talk is irresistible, and he still wins the protagonist’s confidence by fooling him (almost) every time.

Christopher and Jonathan Nolan blend these characters into a noir tale with a nonlinear yet simple and intriguing narrative to follow.

Brilliantly blending the fragments of the protagonist’s memory, these two great authors paint an astonishing picture that is now a cinematic cult.

What do you think? Are we too hard on the wonderful Nolan brothers, or is it fair to always expect the best from the best?