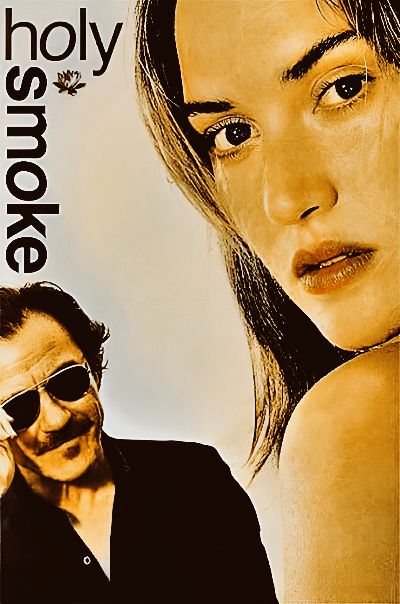 Sometimes family can be so suffocating we run far away in space and even in reality, as happens to the young protagonist of Holy Smoke, a perversely romantic 1999 movie.

Indeed, fed up with the rough and ignorant people in a small town in Australia, this girl flies to India to have a fresh start.

Unfortunately, she ends up just swapping a problem for another, joining a spiritual cult that completely disconnects her from all the world she knows.

Her family, however, hires some mercenaries to bring her back, yet life becomes impossible as she rebels fiercely against this imposition.

Thus, her parents find a house in the middle of nowhere, leaving her alone with a man expert in breaking down the resistance of the brainwashed.

The man was also once part of a cult he joined after his wife cheated on him with his best friend.

As he would later tell his friend/prisoner, after beating the shit out of his friend, he went into the hideout of a famous guru, to whom he gave himself body and soul.

Sometime later, he leaves the cult when he rejects the leader’s sleazy sexual advances, so he tries to convince the girl that these sects are actually a rip-off.

However, she charms him with her young beauty and free spirit, countering each shot in their long conversations in the desert.

Slowly the roles reverse, and she is the one beginning to shape the mind of the man, who, at that point, is madly in love with her.

However, that mad isolation must end, and this love born in such a way cannot have any kind of future.

So many different opinions!

Holy Smoke is a fascinating and intriguing soul duel between only two characters, besides being a movie that everyone most underestimated in 1999.

Don’t misunderstand; the rating is pretty much split 50-50, at least according to several reviews around the Internet.

The funny thing is that, especially when reading viewers’ opinions, many have such opposite takes that you would hardly say they saw the same movie.

Indeed, among all the criticisms, the most absurd are those accusing it of being the usual feminist propaganda manifest, while on the contrary, some others claim this story is full of hatred towards women.

Personally, I consider it a fascinating variation of the classic The Venus in Furs, a cult novel by Leopold von Sacher-Masoch, who officially gave a name to the passions of all the world’s masochists.

In this case, during this struggle/union in the heart of the Australian wilderness, sexual and psychological masochism are not so much emphasized but an actual spiritual submission.

Both protagonists begin with a strong spirit and unshakable convictions, inevitably destined for the clash from which one will come out broken.

Although it is a movie with different psychological facets and interpretations, Jane Campion infuses a lot of irony into all the dialogues, which are incredibly long but also passionate and funny.

When we enter the last act of this tragedy/comedy, it almost turns to grotesque and surreal humor and the mood becomes even warmer than the desolate Australian landscape in the background.

Maintaining a light pace and tone while dealing with a dramatic story is always challenging, but the excellent New Zealand director succeeds perfectly.

This may be why opinions differ so widely, rather than this movie’s real merits or flaws.

Actors and generations, face to face

As mentioned, the driving force of this movie is the dialogue between the protagonists in an atypical screenplay that mixes drama, comedy, and a surreal old-time romance.

These two great actors embody the beating heart of a generational duel among the 90s youth rebelling hard (and paradoxically, at times) against the old rebels of the 60s and 70s.

Kate Winslet is bright and proud in the role of a girl believing to have found the right path shining with wisdom, against which it seems impossible to reason.

The actress commits her best, forgetting the romantic aura of the character that made her famous in those years, namely the tender and naive survivor of Titanic.

On the contrary, she plays a tough girl who never backs down or bends to anyone, deaf and blind to anything outside her ideas of right and wrong.

On the other hand, Harvey Keitel is a veteran of cinema who gives us extraordinary human and spiritual transformation.

Initially wry and dismissive toward her, he falls hopelessly in love with her independent wit and reasoning, even if, at times, totally devoid of logic and sense.

Jane Campion directs a no-holds-barred struggle between a man and woman with great class, aided by her sister Anna in the screenplay.

Unfortunately, Holy Smoke was a commercial flop in 1999, probably due partly to poor distribution that brought the movie to far too few theaters for far too little time.

However, it may also be true that the public, male and female alike, disliked a story that makes both sexes look almost equally stupid.

As far as I am concerned, it is a story about love and power since (without exaggeration) in every relationship, there is always a dominant side and a more submissive one.

What do you guys think instead? Will there ever be a balance between men and women, or will we be forced to love/hate each other forever?