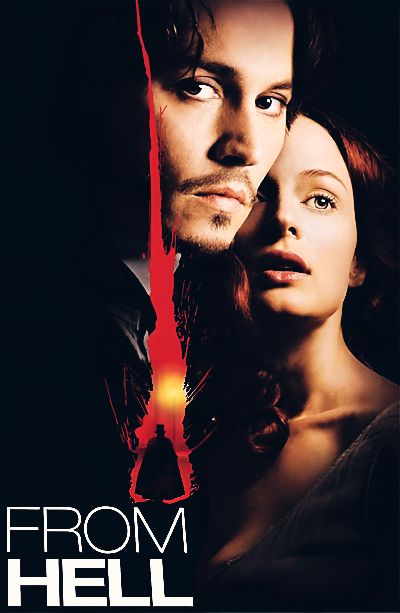 From Hell is a 2001 movie that loosely reconstructs the series of murders that shocked the people of London in the late 1800s.

It all begins in the city’s seediest alleys, where the battered body of a young prostitute is found.

Inspector Frederick Abberline (a real-life policeman) is in charge of the case and immediately suspects that the murder may be some kind of bizarre ritual.

Strange symbols and some coins lay near the corpse; in addition, the murderer removed some of the woman’s organs with surgical precision.

Thus the inspector becomes convinced that although the press gives him the nickname Jack the Ripper, this madman is actually a man of culture who studied medicine.

In addition, the victim was part of a small group of prostitutes who had united against local thuggish exploiters and became inseparable friends.

When the killer brutally murders other women in this group, it becomes clear that these murders are not random but follow a definite pattern.

The inspector falls in love with one of these prostitutes, while police officials try to obstruct his investigation in every way.

To better understand the anatomy of these mutilations, he seeks help from famous doctors, who ridicule him and kick him out.

Only an elderly doctor offers to advise him, a former surgeon and personal physician to the royal family, who can no longer work and limits himself to teaching.

Moreover, the inspector discovers the origin and the patterns of the murderer symbols, leading back to some myths and legends of powerful Freemasonry.

Before Jack the Ripper kills the last woman, the prostitute he loves, the man will have to go up against politicians and policemen who only want to bury the case forever.

From Hell came from a comic by the great Alan Moore, an over-the-top but unquestionably creatively inspirational personality who repudiated this 2001 movie with disdain.

This is nothing new since the brilliant British writer has always hated any cinematic adaptation of his work.

Indeed, although we are talking about movies that I have greatly appreciated, such as Constantine, V for Vendetta, or Watchmen, none of them has ever pleased its creator.

In this case, critics agreed with Moore’s judgment, especially denigrating Johnny Depp, whom they deemed unsuitable for the role of Inspector Frederick Abberline.

Instead, audiences appreciated both the actor’s performance and generally the work of directors Albert and Allen Hughes, boosting From Hell among the highest-grossing movies in 2001.

I am split in judging the direction and acting efforts, perhaps because of the excessive stage elegance and glossy Hollywood aura in some of the reconstructions.

However, the enjoyable gore mystery brings Alan Moore‘s pages to the screen with dignity, although some of his criticisms may not be without merit.

Admittedly Johnny Depp may not have the look of an English gentleman, yet the actor always delivers with his compelling charisma.

This is not a significant flaw, as, for example, it was not for the great Sean Connery in Hunt For Red October, where he does not seem Russian even for a minute but still plays with passion and grit in his character.

So every movie lover should leave these details behind, concentrating on the plot essence, which works almost as in the comic, although it remains superior.

In conclusion, it is a terror fable that, as Jack the Ripper says, represents the spirit of the next twentieth century.

Indeed, from the beating heart of London, the future will flow through the veins of all humanity.

A spectacular cast… perhaps too much?

As mentioned, Johnny Depp is both an asset and a little issue sticking together with no possible solution.

I want to respect the solid performance of the actor who plays this investigation’s protagonist with his usual charming and refined talent.

However, his heavy screen presence as a Hollywood star makes the story too centered around his character when perhaps the narrative should have been more choral.

In this sense, the beautiful and skilled Heather Graham, an actress usually used to cheerful roles in brilliant comedies and here has a dramatic role instead, is somewhat underused.

As with Depp, perhaps her beauty is too exaggerated for a street prostitute, yet she delicately engages the suffering on her character’s face.

I would give more time to the love story between these two characters, although the relationship finally reaches a worthy conclusion in the ending.

However, if I have to choose a cast member from 2001’s From Hell, Ian Holm is undoubtedly this movie’s finest.

His character comes out of the pages of Alan Moore, literally embodying the small but resolute British actor.

This superb performance will always remain among the best of his long career, absorbing the true spirit of a tale hanging upon the real-life reality of a never caught serial killer.

Finally, let us also mention Robbie Coltrane, the sympathetic colleague and the only one helping the Inspector in his investigations; or at least he is the only one who does not openly obstruct him.

I don’t want to leave any doubt to anyone reading, so I state that despite some criticisms, I enjoyed this movie, and not surprisingly, I recommend it to all lovers of serial murder stories.

What better for you, indeed, than the dark past of one of mass culture’s first known serial killers?