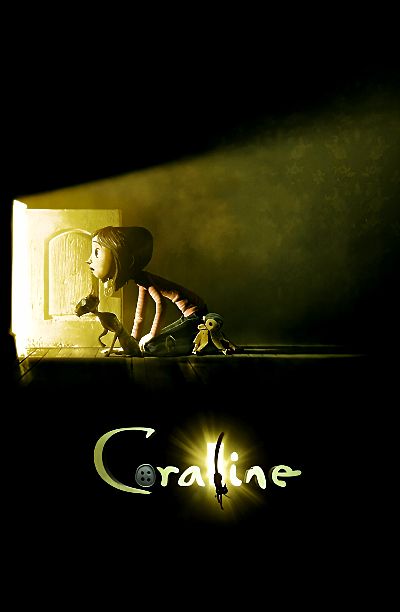 It is not easy for children to accept relocating to a very different place than they are used to, as happens to little Coraline in this 2009 animated movie.

Indeed, the new home is unattractive and is on a small hill very far from any city.

The parents are always busy with their work, preparing a big catalog for their clients which is an important step in their career.

Therefore she doesn’t have much to do except wander around the surroundings, meeting the annoying neighbor boy who always follows her everywhere along with his strange cat.

The child would actually like to become friends, so he gives her a doll that looks disturbingly like her.

Exploring the house, a strange little door intrigues her, but after opening it she discovers to her disappointment that someone bricked it up long before.

However, during the night, a strange mouse lures her to explore the opening that leads to another house through a magical passage.

This house is absolutely identical to her own, and there is even another version of her father and mother.

Her alternative parents seem to be much happier, cheerful and carefree, loving to spend time cooking, playing music or caring for the magnificent garden.

Even the neighbors in this strange world seem more likable, staging spectacular theatrical performances or circus acts with trained mice.

The girl, left alone by her family, begins to spend more and more time in this surreal place.

However, just then, her neighbor’s cat magically begins to speak, warning her that this magical world is actually a trap.

At that point, she must fight for her freedom and her real parents and the other children that passed through that door before her.

Revenge of the gothic puppets

Henry Selick applies his experience with stop-motion in the 1990s with the beautiful Nightmare before Christmas.

Definitely takes influence from Tim Burton; however, he does not just copy the famous director’s neo-gothic style but instead creates a perfect movie for adults and children with Coraline in 2009.

As in the best fairy tales ever, we thus have moments of fantasy and colorful joy, alternating with horror peaks that scare elegantly, never going overboard.

The relationship with the parents is quite interesting, with no painful peaks of unhappiness, but as happens in real life, this misery stems from the little girl’s boredom and parents too busy to stay with her.

What we know about children before we even make a mistake while raising them is that we have to sacrifice our free time, even if we are tired and want to do something else.

Indeed, especially when they are very young, it is mainly on us that they want to impress, showing their games, drawings, and whatever else they vent their imagination with.

The other mother seeking to capture the little girl is actually an evil being perversely wanting to love, at least, so she says, the children who come through the magic door.

But this witch’s love is actually a desire for possession, which she then casts aside like a toy when she is fed up with them.

Wisely, Henry Selick alternates the narrative pace between fast-paced, cinematic virtuosity with still shots during the most emotionally affecting moments.

The final recipe is delicious, mixing danger and mystery with the fantastic puppets’ animations full of adorable little details that make them as human as flesh-and-blood actors, albeit remaining likable as wacky Halloween friends.

True happiness does not come without commitment

Of course, the easiest moral we can draw from this fairy tale is the famous saying, be careful what you wish for, as also happens to the famous Pinocchio.

Little Coraline (who has the pleasant voice of Dakota Fanning) wants a new life, and that is precisely what she gets, with a bit of magical help.

If Pinocchio becomes a donkey, the evil other mother (whom Teri Hatcher doubles in a hilariously creepy fashion) wants to turn the little girl into a puppet with buttons for eyes.

When she realizes she cannot have her, then takes her revenge on the parents, whom she imprisons in an icy glass ball to lure her back into the trap.

As in the old fable of Puss in Boots, another cat (with the amusing Keith David voice) arrives to help the protagonist, who sadly learns painfully that sometimes appearances can be deceiving.

The cat’s strange little boy master is introduced very well in the beginning but returns a little too late in the finale, and I regret that this quirky character dubbed by Robert Bailey Jr was not given more space and importance.

However, Henry Selick mixes various elements from many different stories but creates something new, which deserves our respect by being recognizable and unique in its own way.

In its content and appearance, the story has both colorful and dark tones, making it a perfect experience for adults and younger children.

It is no coincidence that Coraline was a massive success in 2009, ending up being an animated movie that grossed over $120 million at the box office.

As the ultimate moral from this fable, we get balanced advice: to beware of the easy happiness that comes effortlessly because you may find that it is actually costing you everything.