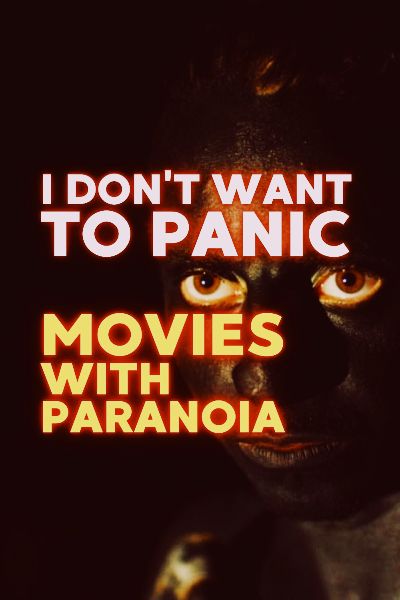 No, I don’t want to live in paranoia, but how can I when everyone else is plotting against me like one of those twisted conspiracy movies?

That’s right, there is someone out there watching us in the dark, patient and unrelenting, waiting for us to make just one misstep to punish us in the most terrible and unthinkable ways.

Every time I approach the house’s curtains, I catch a glimpse of a shadow that deflects out of sight, and when I walk down the street and see two people talking, I know they are talking about me.

Believe me, I know exactly what I am saying, and my girlfriend, whose cell phone I check every 30 seconds, understands it too because I know very well that behind her mother’s text messages is a secret message from her lover.

You can’t fool me; I am always one move ahead of everyone, and even though I know some of you have psychic powers and can read minds, sleeping with tinfoil wrapped around your head will never fool me.

So don’t come and talk to me about paranoia, I am perfectly sane, and today I want to talk to you about some movies about some of my colleagues and their silent, endless struggle against the rest of the world.

Are you ready, sitting down and quiet? Because I am, at least after taking my regular dose of psychotropic drugs.

Let’s start before our invisible enemies get to this article as well because you can be sure they are looking for us.

Our descent into paranoia begins with a French thriller from 2021, a movie that has been unfairly ignored by most audiences.

Opening the dances is an air tragedy, with the crash of an airliner that goes down seemingly for no reason over the alps.

The tremendous crash over the mountains leaves no survivors, so the French government assigns BEA agents to study the black box recordings.

However, the agency’s top analyst is left out of the investigation because of a silly argument with his superior, but he mysteriously disappears the next day.

Having little time before the press conference, the BEA chief entrusts him to carry on the work and find an explanation for what happened.

Analyzing the last minutes before the crash, the boy finds among the noises the indisputable screams of an exalted Muslim, thus discovering that it was a terrorist attack.

However, something doesn’t add up as he tries to piece together the puzzle, believing that someone has falsified the black box.

As his colleagues and even his fiancée treat him as paranoid, the boy is left alone against everyone searching for the truth.

Black Box is an excellent thriller with a fast pace, an intriguing story, and ambiguous characters who are not necessarily always good and perfect.

The sound element is obviously of paramount importance, technologically updating old genre classics such as Brian De Palma‘s Blow Out or Francis Ford Coppola‘s The Conversation.

Yann Gozlan proves again that he is a director capable of handling the plot genre, continuing in the wake of his previous Burn Out and Captifs.

We can only await his next work, then, with the same tension he skillfully puts into his movies.

The second story takes place in the United States, beginning with two children who are awakened in the middle of the night by an unexpected visit from their father.

Indeed, the man and his wife are apart, but nevertheless, he loads them into the car for a crash getaway.

An old army acquaintance has informed him of an impending extraterrestrial invasion, which began with the arrival of multiple meteors on earth.

These aliens would be tiny beings similar to our insects, capable of infiltrating everywhere, infecting humans, and then taking over.

The children obviously believe everything he says, frightened by the sudden visit in the middle of the night.

Yet the older son, fearing his strange behavior, suspects that his father is having an acute attack of paranoia and seeing things that do not exist.

Not surprisingly, the FBI and his parole officer are on his trail after he assaults a policeman in the desert, leaving him on the road badly injured.

Soon the man realizes he can no longer continue the journey, while his children suffer in doubt as to whether the alien invasion is real or not.

I have often been disappointed by productions from streaming services such as Netflix or, in this case, Amazon.

However, I admire how Michael Pearce directs and writes an excellent story combining a small family drama with a global science fiction story.

I also admit that I only knew actor Riz Ahmed after this movie, who plays the character with the right paranoia and strenuous will to survive.

Equally good are young Lucian-River Chauhan and Aditya Geddada, children tossed around by a father who they do not know whether he is a madman or a savior.

In short, a pleasant surprise that could promise a good future for future Amazon productions.

We remain in America, but we are talking about a very different paranoia of a hypothetical alien invasion, namely the much more real fear of white racism toward black people.

Not surprisingly, the story begins on a vast cotton plantation where a small group of soldiers force black slaves to live in humiliating and grueling conditions.

The soldiers repeatedly abuse and mistreat their captives, killing them or branding them when they try to rebel or escape.

However, one woman does not give up, living in constant fear but trying to help her comrades survive.

At the same time, we follow the life of a modern-day writer, a beautiful, successful black woman loved and envied by all her colleagues.

Although she is on a speaking tour to present her new book, she still finds time to support groups that struggle daily against racial discrimination in America.

Although they may seem like two characters light years apart, we soon discover that both women share the same tragic fate.

Antebellum follows in the wake of the “horror of paranoia and racism” strand in the style of Jordan Peele, whose Nope, for example, I cited among the best movies of 2022.

Indeed, some Americans seem determined to continue living in the memory of the good old days of segregation, struggling to accept modern multiracial society.

If it were just a few poor, ignorant rednecks, it wouldn’t be such a big deal, but sometimes the disease of racist paranoia affects even policemen and politicians even worse than we see in this movie.

Therefore it is always good to refresh your memory about what was going on in the not-so-sunny days of the cotton slaves with a highly entertaining high-tension horror thriller.

Unlike the previous movie, based on a widely spread feeling of hatred, and not only in America, now we talk about a much smaller and more personal paranoia.

A young girl moves from a small provincial town to the big, noisy Los Angeles, but finding a suitable apartment that costs little takes work.

However, she is lucky enough to find a place in a small apartment building where everyone seems extremely friendly to each other.

But she soon realizes that that is only a facade hiding a community that is ready to do anything to defend itself from the outside world and to keep its new guests away by any means.

Having escaped from her family precisely because she felt trapped, the girl will do anything to fight these paranoid lunatics and not end up a prisoner again.

1BR is a low-budget movie, built simply with a handful of characters in some relatively poor and bare interiors.

But the horror atmosphere of psychotic cult and brainwashing works perfectly, covering any lack of famous actors or expensive special effects.

I think it is a movie that many people will feel close to, especially younger people feeling imprisoned with an unsupportive family or an unfulfilling job.

In this case, the Hollywood dream remains a massive sign in the distance on the Los Angeles mountain that the kids admire as a dream of escaping their gray reality.

I understand if some of you may feel uncomfortable watching this movie, but in a way, that is precisely what a good horror film should do.

Because if we want to reflect on our society through entertainment seriously, we must also dare to step out of our cinematic comfort zone.

For today’s last movie, we move to the remotest reaches of Colombia, where in a military shelter in the mountains lives a small group of boys.

These train according to strict regulations on behalf of an unnamed organization, of which they know only an officer they call The Messenger.

In one of the refuge rooms, moreover, the organization keeps an American doctor captive; we do not know whether for ransom or for political reasons.

However, this regime does not prevent them from having personal relationships, so the leader of the group tells the officer that he intends to marry one of the young girls.

The messenger approves their union, leaving behind a cow that he entrusts to their custody, threatening severe consequences if anything should happen to the animal.

Yet the combination of guns and stupidity does not bring much luck, so when the boys shoot into the air to celebrate the wedding, they unintentionally kill this cow.

From then on, the group begins to crumble from within until the enemy attacks them by surprise, and they must flee into the jungle.

Monos is a movie with a Brazilian soul as the director Alejandro Landes, whose excellent direction and screenplay perfectly capture the paranoia induced by military exasperation.

Indeed, the young protagonists of this story know nothing else in life outside the harsh indoctrination of the military.

Their madness takes us back to Colonel Kurtz‘s crazy village in Apocalypse Now, where what is good in human nature is twisted and corrupted in the name of military efficiency for war.

This movie probably won’t appeal to everyone, lacking the adventurous pace and underlying optimism of the big blockbusters that are usually so successful.

But if you open your heart to a different experience, you may discover something cinematically lacking.

Are you people willing to try movies different from what you are used to, or does the paranoia of boredom kick in, and you immediately feel lost?

Captain Pantoja and the Special Services...